The film is shot in two key locations in South-East Queensland, Ipswich, and Toowoomba. The majority of the movie was filmed inside a disused Ipswich Courthouse, which Producer Scott Corfield was ecstatic to find. Lead by a 40 strong, all Australian cast, with some of the most impressive names in the Australian film industry, this film is a true testament to the talent in which Australia is capable of producing.

Jack Thompson who has had roles in Australian classics such as, The Man From Snowy River and Australia plays the plaintiff barrister. Jaqueline McKenzie who is best known for her roles in Romper Stomper and Deep Blue SeaÂ gives her performance as the opposing barrister. 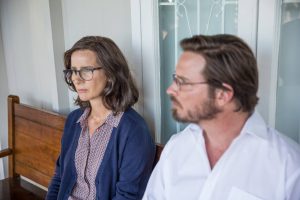 Sara West portraysÂ the older version of Lyndal, the victim. Her psychologist is castÂ by Murielâ€™s Wedding star Rachel Griffiths. Lyndalâ€™s parents areÂ Puberty Blues actor Susie Porter and Martin Sacks from Underbelly. Gyton Grantly, another Underbelly actor disturbingly portraysÂ Lyndalâ€™s abuser. He says that while this role is especially challenging and dark, he chose to play the role not for himself but for the good of the story.

Donâ€™t Tell follows the heartbreakingly true story of Lyndal, a victim of sex abuse when she was only eleven. The story shows her struggles in coming to terms her horrific childhood, but it also shows her absolute determination to bring the people accountable to justice. It shows the spirit of theÂ true aussie battler.

Donâ€™t Tell is a hard narrative to swallow, however, given the current political climate surround sexual abuse, it was a story that had to be told. Give it a full Australian cast led by a seasoned Australian director and Don’t TellÂ has the ingredients to make it a film every Australian needs to see.Â

Donâ€™t Tell had its Australian premiere on May 18th and is now playing across Brisbane. Find out where to see it at www.donttellmovie.com.

Get Heavy With Port Royal and Rebecca Dostal

The Making of a Music Festival – Part Two