Johnny Hunter frontman Nick Hutt caught up with TCI to chat about their debut EP and the dynamic Sydney scene.

The Sydney four-piece began winning fans and catching the eye of industry types when they burst onto the stage in 2017. Their undeniable energy, and commitment to delivering great music and a stellar live show, has seen them support the likes of Jack White and play sets at some of the nations best festivals.

Following on from a stack of successful single releases, the wait is finally over for their highly anticipated debut EP, Early Trauma. A five-track delight that continues to capture their post-punk hearts all the while adding more strings to the Johnny Hunter bow.

NIck Hutt: Yeah. It’s funny we actually met on the south coast, in Wollongong, when I was studying at university down there. I met Xander on a drunken night out down at the uni, down at one of the colleges. He was playing guitar. At that point I wasn’t really making much music apart from what I was doing by myself. I saw Xander playing guitar and I kind of barged in and I was like “I’ve got some poetry.” and he was like “Ah. Okay stranger. Lay it down.”. So I did and we’ve kind of been inseparable ever since. Gerry, our drummer, was someone that was just kicking around the scene when Xander and I started playing. He really liked our music so we got him on board. He started playing drums, even though he’s actually a guitarist at heart. He agreed to it, and he can really bang those drums so credit to him, he’s a very impressive guy. And then Cerone I met later down the track through mutual friends. I actually met him at one of the Triple One guy’s 21st birthday. At the time Boston accents were in and everyone was doing it, it was kind of a funny thing to do. We had this massive argument, which was obviously staged, in front of the whole party in these Boston accents. People thought it was a real thing and it got quite involved. We ended up having a laugh about it and I was like “do you wanna join my band?” and he was like “Yeah, I play bass.” and I was like “Yeah, cool, alright.” and that was how it all came together.

TCI: You’ve gone from strength to strength in terms of your releases and this debut EP brings yet another dimension to your sound. Do you feel your songwriting has evolved, even in the relatively short time between your first release and the release of Early Trauma?

NH: Yeah definitely. I mean, when we first started releasing we were very gang vocal orientated. We had thrashy guitars. There was a bit of a punk element to it. There’s always been a very poppy element to our songs I feel, even though we’ve got a bit of yelling and screaming, and we’ve got quite a different voice to most pop acts. We’ve developed, definitely. We’ve gotten more into synth work, and structure, and melodies, and harmonies. Yeah, we’ve definitely grown through this release.

TCI: Who are some of the artists/bands you were listening to while Early Trauma was being written?

TCI: It feels like this EP carries with it some very emotive, and at times confronting, lyrical content. How do you approach writing lyrics in Johnny Hunter? Is it more about self expression or are you hoping people will be able to see themselves in the stories and get something out of the narrative?

NH: I think it’s both. Going back to influences, say for someone like Lorde, you can be listening to her and she can be putting all her emotion and all her storytelling on you, but you can relate to that and you can feel that. You can feel what she’s feeling. I guess that’s what we try to do with writing. It’s self involved but we also try to be universal.

TCI: You’ve mentioned that you recorded the EP at A Sharp Recording Studio with Adrian Breakspear? What’s an average day in the studio like with Johnny Hunter?

TCI: Was this your first time working with Adrian Breakspear?

NH: We’d worked with him in the background before but this is the first thing we’d released.

TCI: Did you record the EP in one full session or was it something you built up over time?

NH: We built it up. We all work, and we’ve all got different lives, and different things to do. We had to do it over almost three months. One day we’d come in and do the drums and then maybe the next day do the bass. Then, like a week later, we’d do the guitars and then another round of guitars a couple of weeks after that. My vocals came in about two months later. It was just really difficult for us to find the time and find the studio space to do it. Then we had a month or two of production and reviewing the tracks and whatnot. So it was actually quite a long time span.

TCI: As a band you have such a powerful aesthetic. Everything from your look, to your artwork, to your live shows is so captivating and cohesive. Is that something the four of you all work on or is there someone who tends to have the vision for that side of things? How has it all come together?

NH: I started with the makeup and the haircuts and whatnot and the boys quickly followed suit. I think it was just to stand out originally because it was quite hard to make a statement in such a dynamic Sydney scene. We had to bring something to the table which was just a little bit different. The boys saw that pretty quickly and we all followed the same lead I guess.

TCI: Touching on the Sydney scene. Over the past couple of years there have been a lot of venues close down and a few have bounced back. Obviously lately everything has been thrown for a loop, but can you paint us a bit of a picture of the Sydney scene?

NH: There are so many bands coming up. So many bands playing really, really good live shows. There’s definitely been a jump in quality and a real jump in the quality of live shows. I mean we’ve got bands like The Buoys, 100 and Baby Beef that can all really, really deliver a good show and good music. I think that’s what the Sydney scene has become all about. Everyone is trying to one up each other in the different kinds of live shows that we do. Baby Beef are supporting us on our Sydney show and their live shows are incredible. They have costume changes and props and all sorts of things, it’s great.

TCI: Still thinking about the look and feel of your live show. You definitely have that punk energy and you’re definitely dramatic. Do you find it easy as a band to channel that much energy and personality, or are there times, or audiences, where you feel like it would be easier to shrink into something less unique?

NH: Yeah there are times that it can be easier, but I think if you take the easy way out, there’s not much to remember it by. For instance, one time way back in the day, we were playing in Port Macquarie, this was when we were kind of the “play as many shows as possible to as many people as possible” thing, and we played in this pizza bar. There were ten people there having pizza and being like ‘oh there’s a live band on.” and maybe a 18th birthday party came in or something and everyone was sitting down. We could have just gone into our shell and just stood there but Cerone was off the stage, I was on the pizza table, people were feeding me pizza. It was pretty funny but they’re still fans. We still stay in contact with them. I think the most important thing is that, if you pride yourself as a live band and you can do a bit of a show, then definitely do it every time. Don’t take the opportunity to go into yourself because I feel like that’s just not helpful to who you want to be.

TCI: What’s been your favourite Johnny Hunter show so far?

NH: There’s three that are right up there. One is playing Luna Park Bigtop with Jack White in The Saboteurs. That was incredible. They didn’t allow us, or anyone in the audience to have phones. So you were playing on this massive stage to a huge amount of people and no one was hiding behind their phones. It was very confronting. You had eye contact with literally every single person there in that venue. So that was an incredible experience because it’s pretty hard to come by nowadays that there are no phones involved. Another one was Yours and Owls Festival because one of the things we did when we started the band was promise ourselves that we would play Yours and Owls within the first year or two and we managed to do that. So that was almost a bit of a homecoming. Coming back down from Sydney to Wollongong and seeing all our friends that we went to uni with, and them being in the crowd, that was quite special. The other one was when we played Bad Friday. We were playing the smaller stage but we were playing at the same time as Jungle from the UK. They had packed out their set but our set was also massively packed out, it was huge. There are some really good photos of us under the night sky, in the laneway of industrial Sydenham. It was such a good show and I have such good memories from it. 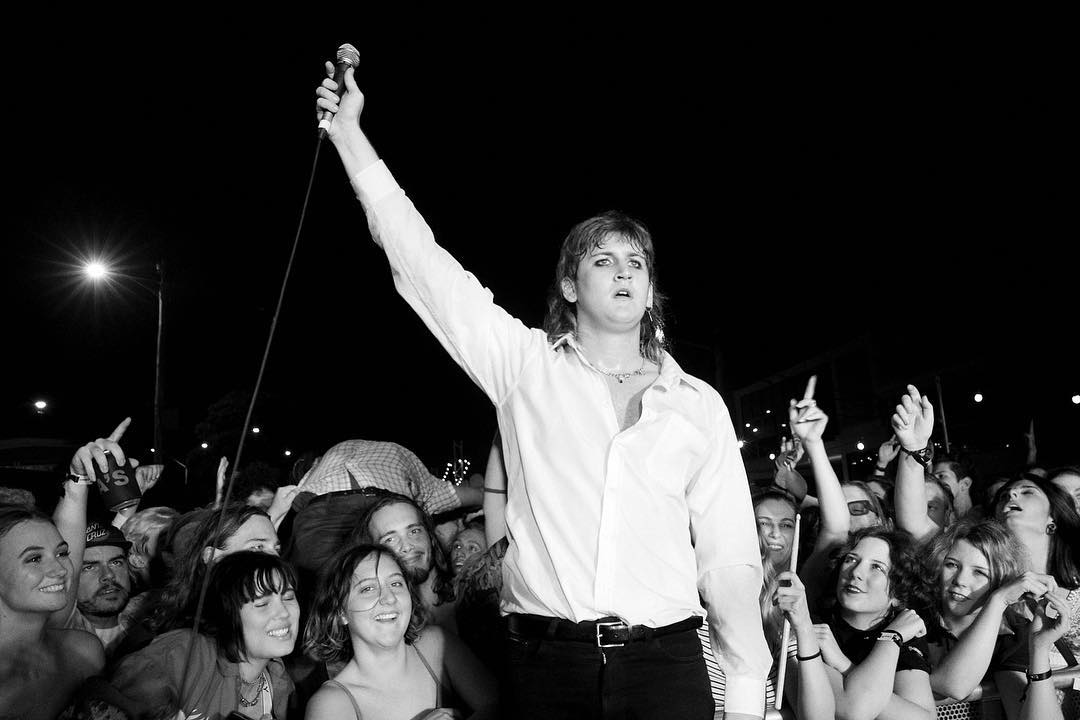 TCI: If everything goes to plan you’ll be touring throughout October/November. What’s your favourite and least favourite thing about touring?

NH: I think my favourite thing about touring is touring itself. It’s so good to just get on the road with your friends and meet new people. Playing to new people, in cities where you assume they wouldn’t know you existed, and having those people come up and tell you that you’re a really good band is really nice. The worst part about it is that we always get carried away on tour. We always end up waking up worse for wear in the early morning. We always have to catch the early flight so we wake up feeling really, really dusty and we have to get on a plane and go to the airbnb, and the airbnb doesn’t open until 4pm and it’s like 10am. So you kind of have to lick your wounds and just walk around, or sleep in a park or something. It’s quite a trainwreck, but it’s great [laughs].

TCI: It’s 2020. The year for completely crazy things and you’ve just released your debut EP. Do you have an end goal in mind for Johnny Hunter. If we were sitting down for a chat in ten, 20 or even 30 years time what “band bucket list” items would you want to have ticked off?

NH: Oh, it’s huge. I guess we’d like to one day play at Enmore Theatre. I mean, we’ve got big visions. That’s one of the things that drives us as a band to make new and better things than we have before. You know, moving to the UK is one of them, and touring the world. If we’ve done those, and we’re getting paid for it, I’m pretty happy [laughs].