Alright, that’s enough sibilance. But go easy on me: unlike Cal, Rowan, and Thomas, the stars of Elixir, I can’t balance on my head, on a trapeze suspended mid-air, look-mum-no-hands, (Mum quietly faints in a corner). Wordplay’s my only party trick.

A headstand on a trapeze is not the boys’ only party trick; nor is it the only F you, Gravity! on display. The talented trio serve up a smorgasbord of physical feats and acrobatic achievements. You’ll never look at a ladder in the same way again.

So far, so international gymnastics (minus the ladder). But have you ever watched a gym competition and laughed? 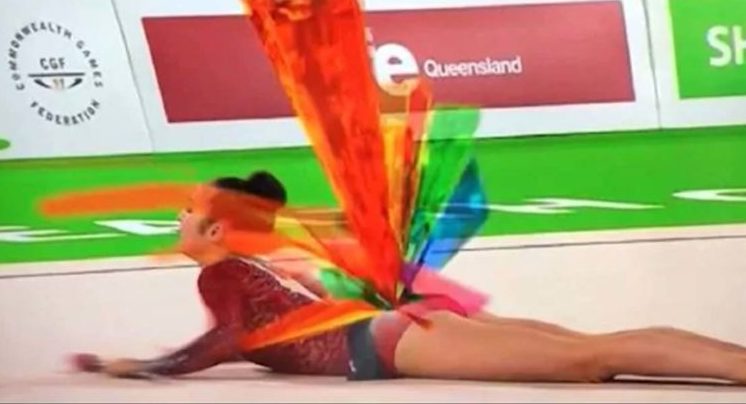 Apart from when this happened. Thank you, Channel 7.

Elixir’s success lies in being a narrative, comedy driven circus. The stunts are in the context of three especially ripped scientists dabbling in self-experimentation. With each new elixir downed (geddit?), their powers are enhanced and hilarity ensues. What’s the worst that could happen?

The storyline allows the three – all graduates from the National Institute of Circus Arts in Melbourne – to show off other skills: dancing (stripping is dancing), acting, clowning around, complemented by light and sound design. Yes, they do street performances, but they’re playing in the big league now.

The drama is such that my companion – apparently not a fan of horror or immersive theatre – warned, ‘If they sneak behind us, I’m going to punch them’.

Elixir presented by Head First Acrobats ran 29 Nov – 1 Dec at Brisbane Powerhouse as part of Wonderland 2018. According to the show’s creator Thomas, after performing it for several years, it is likely to be retired.

Find out where you can enjoy their new show, Railed, by following Head First Acrobats on Instagram and Facebook.

Just like a political debate only crunchy: Nathan Sibthorpe