After a massive year in 2018 topped with a performance at the Commonwealth Games Festival, Ella Fence returns with the brand new single, ‘Don’t Feed the Monster’.

Ella Fence channels her passion for music and drama into crafting theatrical pop, and she’s gathering plenty of fans throughout the process. TCI caught up with the Brisbane-based artist to talk about her creative process, blending art forms and what lies ahead.

The Creative Issue: When did you start writing and performing your own music as Ella Fence?

Ella Fence: I have always been a singer, ever since I was really little, and it’s been a dream of mine. I have a picture that I drew when I was four or five, and it says, “when I grow up I want be a singer and I want to sing in front of 1000 people”. I actually got to do that last year at the Commonwealth Games Festival 2018 shows that I did as the Kate Miller-Heidke and Regurgitator support. That was a milestone. I’ve sort of had to redefine my goals because that was the one thing I was really striving towards. Now it’s travelling and playing shows that are my own and attracting that many people. It’s an exciting time.

In terms of the Ella Fence project, I think was working on it for about five years. It’s always been a slow progression — I started school, I was writing poetry and then I’ve always been a singer. Then I started learning guitar and I played piano when I was younger. It crystallised into an art form of my own. Getting into songwriting and production, and then getting clear about the kind of music and artwork that I want to create. It came from those places.

TCI: And what is your musical background?

EF: I’ve always played instruments and I studied at The Conservatorium, and I’ve played in bands. The singing coach I had when I was younger had a jazz background so that’s probably influenced my style or technique in terms of singing. In terms of the kind of music that I write, there’s a lot of embellished chords and interesting sort of chord changes and things like that… I used to play the flute at school as well, so I have that classical music background. There’s a lot of different styles of music and things that I collect over the years and feed into my own art form.

TCI: Was there something that made you decide to move into a more synth-based production process?

EF: Mostly because it’s the kind of music that I like to listen to, and I enjoy seeing live. I think that if it’s sort of speaking to me in that way then creating music in that head space is always really positive. I in no way sort of see it as a full stop… As an artist you’re always redefining things and growing. You learn something new so you’re applying that in ways that are ever-shifting. I wouldn’t say that this is the Ella Fence sound — I think it’s quite eclectic.

I write in a lot of different ways with piano or guitar, or acoustic guitar… I’m not opposed to exploring things in different areas. I guess for now the music that I’m really loving and that is really cutting through for me from an audience experience is the style that I’m making. It’s kind of reflecting where I’m at musically, what I’m listening to. 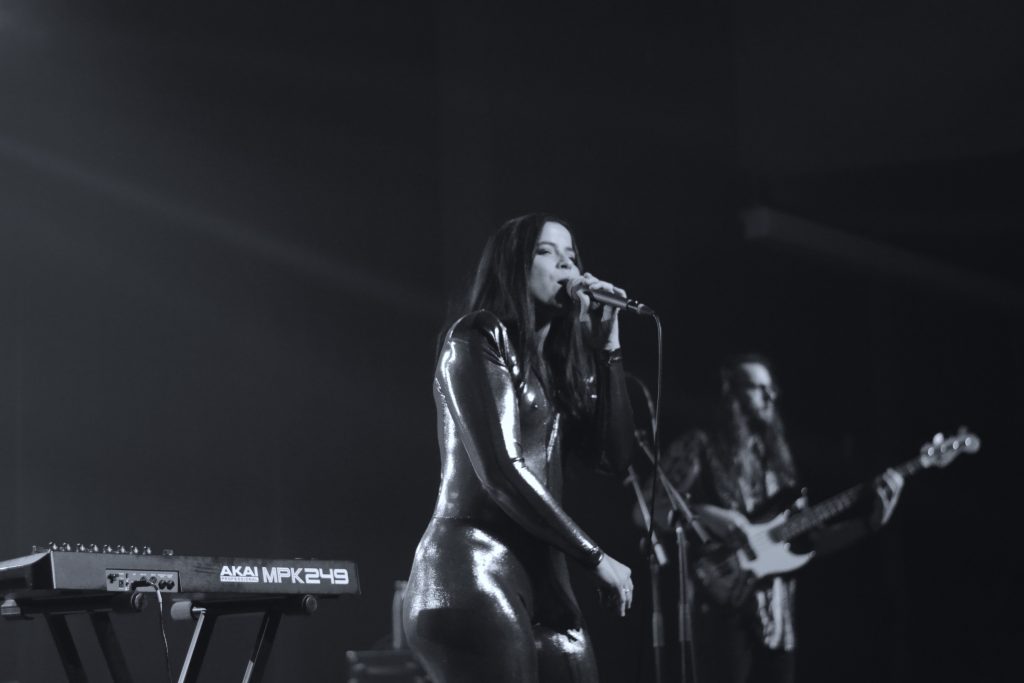 TCI: What was it like working on ‘Don’t Feed the Monster’?

EF: Brad Hosking, who produced the single, and I were collaborating and it started from conversations we were having about internal and external “monsters”. We were talking about negativity and how in many ways, in a relationship or within your own self, if you feed it or you don’t do something to actually counteract that then you’re making the problem worse. It’s like, “okay, well don’t feed the monster”. It’s within your own personal power to either partake in that negativity and that self-destructive behaviour, or not.

I guess it’s an empowering song in the sense that it’s telling yourself to not feed it. It’s also a bit of a warning as well — don’t trigger me because I’m not just going to be quiet about this if you are going to do the wrong thing or be manipulative… It’s those kinds of things, and also just ‘don’t feed the monster’ in relation to consumerism and industry. If you’re partaking in something that you don’t necessarily agree with but you’re not actively doing anything to counteract it, then it’s feeding that bigger proverbial monster.

TCI: Is overcoming negativity something that you’ve encountered in your own artistic journey?

EF: I’m sure we all can say that we’ve encountered that within our own lives. I think it’s a very universal theme. In order to operate in any space that allows you to grow and achieve things that are beyond where you’ve been, you’re always going to have self-doubt.

TCI: Do you prefer working solo or is there something that you find valuable in collaborating on writing music?

EF: I probably write on average two to three songs a week, and most of that is solo. I do songwriting at a few different venues here in Brisbane who are really supportive of my artwork. I find locking into different collaborations is a really good way to keep it moving forward, because you’re bouncing off someone else’s energy. If you’re not feeling 100% that day then they might be killing it, and then same thing with you.

I work with people who I admire and respect and they’re absolutely phenomenal musicians. I’ve found that the learning for me is getting in there and doing it, and being surrounded by people who have knowledge, skills and talent that I can draw from. Working with someone like Brad who’s so well-versed in music… His knowledge of production and his knowledge of music, song writing and just every facet of his profession is like a well-oiled machine. It basically is learning and getting that first-hand experience, so I think that there’s always value in doing that. When I’ve got personal things that I’m writing about when I might want to write about that solo and then bring it to someone. It’s a bit of a balance of both.

TCI: Do you find that your live performances are a way that you can consolidate your musical and theatrical backgrounds?

EF: Yeah! The best shows that I’ve seen have light and shade. They have areas with that dramatic element — there’s costume, there’s… I feel like those things cross over art forms anyway, but I feel like they directly correlate with theatre or the way that you watch the narrative.

For me, in terms of creating the EP and the album that I’m working on now, it takes people on a journey. It’s story-telling and wanting them to sort of have an experience of listening to the project. I know that there are people out there who really value listening to a project from start to finish and being taken on the journey. I find that both of those things… you can apply that to your body of work and your stage show.

EF: Finishing up the album! Very, very excited about that. We’ve just put to bed a film clip — so the song will come out and that will come out as well. It’s mostly Ella Fence at the moment… More music, and the album, is on its way.

You can listen to Ella’s new single here.

On beat with Beethoven: QSO’s 2020 Season