Empire of the Sun's Ice on the Dune is Splendour ready.

Their breakthrough album Walking on a Dream released in 2008, cemented them in the Australian music scene.

Five years later the duo have developed their euphoric electro pop sound whilst maintaining the essence of their earlier work.

Ice on the Dune has a fuller sound, with the addition of orchestral fillers and extra percussion that the first album was lacking.

“Lux” the intro track to the album is just that, a whimsical vocal free track that could be straight from a 90sâ€™ era Disney film. 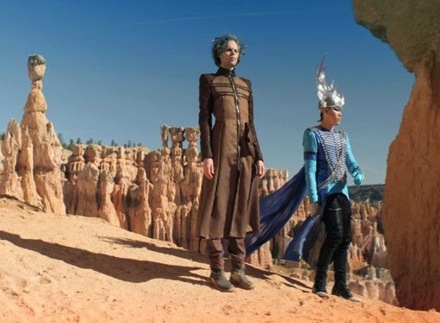 With its mix of electronic percussion and orchestral narration it is an unexpected sound from the duo.

The subdued sounds of “Lux” evaporate instantly once you hit the first single, “Alive”.

This punchy pop anthem is the perfect party song. With its repetitive beat and catchy lyrics like, “I’m loving every minute because you make me feel so alive”.

“Alive” is a track that will have you shouting out the chorus at the top of your lungs and will undoubtedly be a big hit on the summer festival circuit.

“Celebrate” follows the same suit whereas tracks like “Keep A Watch” and “Iâ€™ll Be Around” are a little more somber.

They are a little lighter on the electro pop and feature Bowie-esque vocals.

Empire of the Sun fans will not be disappointed with this album.

It is the perfect mix of familiar old and exciting new sounds and of course laced with the duos iconic vocals.

As an album,Â Ice on the DuneÂ has more focus than the previous with each track guiding you on a shimmery journey.

The experimentation in this album has paid off, making Ice on the Dune some of Empire of the Sunâ€™s best work.