Donâ€™t fight your body: embrace it! In her debut documentary, Embrace, founder of the Body Image Movement, Taryn Brumfitt wants women to share her realisation: our bodies are not ornaments, theyâ€™re vehicles

Sitting back in the seats of the Palace Cinema Barracks, the Creative Issue was lucky enough to catch a preview screening.

Which is a feat, because the Western worldâ€™s body image landscape can so easily disempower. With the media saturated environment we live in, women are constantly bombarded with this notion that we should be trying not just to be beautiful, but to achieve a certain kind of beauty. Whether we are aware of it or not, the media has conditioned our society to perceive beauty in one way and that is to be flawless. The airbrushed women in magazines, the actors and celebrities caked in make up, hair perfect, skin blemish and wrinkle-free, body toned, tight and skinny.

We women should be aspiring to achieve this because it is achievable, apparently. Never mind that even the women that grace those pages and screens arenâ€™t able to achieve that level of â€˜perfectionâ€™ (although theyâ€™re often forced to try with cosmetic surgeries, personal trainers, makeup and beauty teams, and, unfortunately, sometimes resorting to disordered eating). The diet, beauty and fashion industries are making a killing, perpetuating an ideal that is making many women unhappy with their bodies andâ€”at its very worstâ€”has been literally killing them. With eating disorders so common among women, the most extreme cases have resulted in death.

Embrace covers all these issues and more, yet still leaves female audiences with a sense of empowerment. Several elements contribute to this, and among the most notable is the writer/directorâ€™s decision to insert herself into the narrative. As we learn from the very outset of the film, Taryn struggled with body image herself, and was thrown into the media spotlight after she reversed the traditional â€˜before and afterâ€™ photo by posting an image of her body building form as the â€˜beforeâ€™ shot and her fuller, less toned body as the â€˜afterâ€™. This post went viral and set her on the course she is on now.

In the film, Taryn isnâ€™t shy about revealing her embarrassing (albeit normal) post-baby bodily functions and shares her most intimate moments, including the home video of her giving birth to her first child. Taryn uses voiceover, re-enactment and archival footage to illustrate her story to the audience.

By moving from behind the camera to in front of it, Taryn acts as a device to motivate and inspire, as a woman who has navigated and conquered the pressures related to body image. By embracing her body, she is now in a position to try and find out â€˜why women are unhappy with their bodiesâ€™ and to encourage those women to learn to love themselves instead.

Watching the subjects onscreen, I suspect Taryn has a talent for making people comfortable in front of the camera. This is demonstrated when Taryn visits a woman struggling with an eating disorder at her home. Tara has been struggling with her body image since adolescence, and though she seems so fragile, through Tarynâ€™s prompting her message is strong. The interview is conducted in Taraâ€™s bedroom, which suggests that there is a form of trust as Taryn and the camera are allowed into that very personal and intimate space.

Embrace presents information and stories in a way that reveals the seriousness of the underlying issues when it comes to poor body image, but doesnâ€™t overwhelm. Instead it balances factual data with emotion, and infuses humour to offset some of the more devastating stories.

As seen when Taryn visits a plastic surgeon and asks him to identify the parts of her body that he thinks need cosmetic surgery. She stands naked onscreen while the doctor examines her body and lists the work she needs done on her breasts and tummy. To a woman that doesnâ€™t love her body this may have been hard to hear, but Taryn listens and acknowledges his recommendations politely. As the doctor turns his back to the camera to retrieve a mirror, she looks over at the camera and laughs silently â€“ sharing a private joke with the audience. She knows sheâ€™s happy with her body and we know she is too. The act undercuts a potentially upsetting moment and even garnered some giggles from audiences in the cinema. 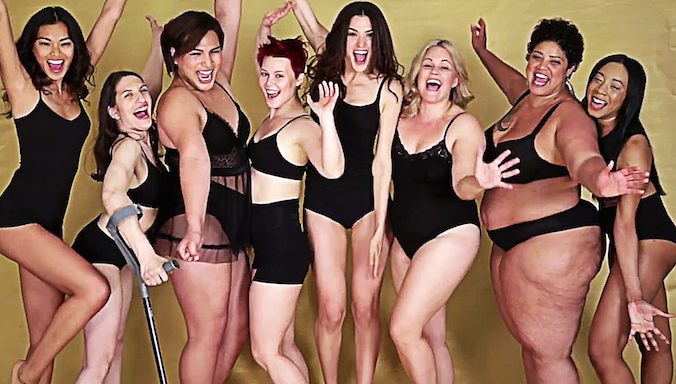 In an attempt to encapsulate the disheartening and overwhelming landscape, Embrace also shines a light on the problematic nature of videogames exhibiting violence against women, body shaming practices, the unintentionally harmful way we praise girls, pro-anorexic websites, fashion and beauty industries, airbrushing and cosmetic surgery. Taryn combats these overpowering pressures by choosing strong female subjects that have dealt with body image issues and have found their own ways of conquering or defying them.

These women contribute to the empowering message Embrace tries to give. We see women like founder of Mamamia Mia Freedman, who as Cosmopolitan magazine editor, fought against institutionalised thinking that marginalised women any bigger than a size eight. And photographer Jade Beall, who finds beauty in our bodiesâ€™ imperfections. Another inspiring woman that makes an appearance is Turia Pitt, who sustained burns to over 65 per cent of her body and contends that it may have been the best thing to happen to her. These are just a few of the many subjects that appear in the film.

Yet, Embrace isnâ€™t for everybody, that is, according to the Australian Classification board. Last week the documentary was handed down a rating of MA15+. This means it may be difficult to get Embrace screened in high schools. Which is a shame, considering this demographic is most vulnerable to body image pressures and is at a point where perceptions can be most easily moulded or embedded.

The film was categorised as MA15+ because it contains twelve seconds of photographs documenting the differing appearances of female genitalia. This inclusion is meant to point out to audiences that vaginas are all different and vary in size and shape. An inclusion like this is important as some think that all vaginas should look like those that appear in pornography.

The board labelled the sequence â€˜high impactâ€™ and went on to specifically outline the ‘protruding labiaâ€™ were of concern â€“ taking issue with the very area Embrace is attempting to de-stigmatise. New Zealand has not followed suit, instead classifying the film M.

Taryn wields the camera on the disempowering world weâ€™ve created, but somehow finds the stories, people and facts we need to arm ourselves against the mechanisms that endorse the idea of women looking a certain way. She invites us not only to challenge these ideas but to live in defiance of them, or at the very least not to judge or body shame people who do. You can catch Embrace in cinemas from 4th August 2016.

We love Jan Power’s Farmers Markets and so should you. Why?