Gets Good Light highlights the unequal treatment of immigrants in America and was due to premiere at the newly cancelled Tribeca Film Festival.

Gets Good Lights is a perfectly cut slice into the rarely seen reality of modern American life. A life where success (particularly as a Minority) requires you to work three jobs, whilst navigating an evermore cruel America that actively doesn’t want your presence. Throughout the film, two protagonists exchange their perspectives on living in this dark modern America, until an encounter with U.S. Immigration and Customs Enforcement (ICE) converges their perspectives.

Enthralling and chilling, Gets Good Light understands the complex power dynamics of the society for which it is portraying. One of the earliest scenes shows the boss of one of the main protagonists, gleefully celebrating the gentrification of Brooklyn, praising the protagonist (a black man) for being a “literal bullet dodger”, all while denying him the ability to tell his own story. This scene lasts maybe one or two minutes but it is deceptively dense in content. Gets Good Lights is filled with these substantive scenes and lines that mirror an American reality far more accurately than standard cinema has or wants to reflect. The film walks with a type of subtlety that leaves me curious to see if my fellow writers at Creative Issue, could pull the same things that I, as an American, pulled from this film. 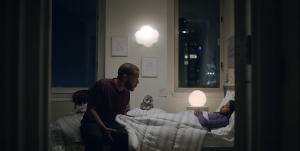 By my uninformed standard, the technical aspects of the film (the directing, the acting, the set design, the lighting, etc) are stellar. The film stretches tremendous visual mileage out of its limited number of locations, and by the time these settings grow even a tiny bit stale, the film is over. With acting is as nuanced and as detailed as the haunting composition. Consisting of slow ominous orchestral pieces that creep over luxury white condos, and darkly lit kitchens, setting a haunting and almost medieval tone for the film. With all of these elements in harmony with each other, it not hard to see why this film was selected for the Tribeca Film Festival.

The global outbreak of COVID-19, adds a strange dimension to this film, that I want to touch on before I close out this review. For a narrative so rooted and dedicated to the tangible, current, and unspoken realities of a post-2016 America, it was both exciting and terrifying that many of the scenes within the film would not or could not happen as of the writing of this review. Both in terms of the setting of the narrative, and the actual real-life filming of Gets Good Light. That, in a matter of weeks people simply shaking hands in a crowded room has become taboo. This dissonance is by no means a negative to the film, in fact, it highlights how immediate shifts, whether unexpected, like a global pandemic, or intentional, like new immigration policy, can have major and severe effects on the most vulnerable within society.

At the beginning of this review I referred to Gets Good Light as a slice, small, compact and very good, but like a slice only a piece of a whole. Gets Good Light is an exceptionally well-executed snapshot from a single window on a single day of two American’s lives. Hopefully, off the success of this film, this team of creatives will continue to create works that dive and dance into the dark troubles, and the beautiful humanity of modern America. That eventually through honest films and art like this, the slices and snapshots will become something whole, vast, and complex, but ‘eventually ain’t tonight.’

HOTA has $1000 Artist Grants. Are you eligible?