Frank Ekinci and Christian Desmares have delivered a unique alternate history to 20th century France in the visually stunning and aesthetically exciting film April and the Extraordinary World.

Donâ€™t let the filmâ€™s animation cause you to disregard it as a simple childrenâ€™s film. This is a film that connects with every type of audience member.

Imagine world-renowned scientists disappearing from around the world and technological advances and other inventions such as electricity never having been discovered. It is a world of a coal and steam governed existence. Severe climate change, deforestation and the quest for a new energy source threatened war between Western and Eastern countries. This resulted in the remaining scientists hunted by authorities to work for the French â€˜empireâ€™. Young April (Marion Cotillard) is on the cusp of a great scientific discovery, one started by her now missing parents. 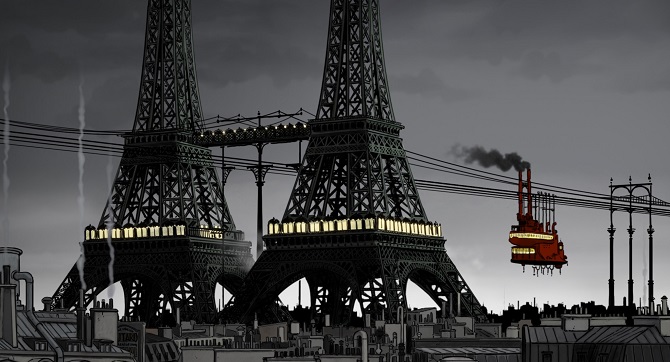 April and the Extraordinary World showcased the history of French Cinema through cleverly utilised stylistic choices, themes and execution whilst tackling some topical issues. Elements of 1930s poetic realism spoke true to the filmâ€™s characters. Cast out to societyâ€™s fringes and without the parental guidance, April and her fabulous talking cat Darwin (Philippe Katerine) witnessed distinct class differences in the treatment of certain individuals. Ekinci and Desmares also incorporated what seemed to be filmic techniques from 1960s French New Wave Cinema, by having their protagonist explore existential themes. Their vehicle of explanation was neither boring nor typical, choosing to show the damage caused by human civilisation through genetically-mutated, talking lizards.

All filmic technicalities aside, April and the Extraordinary World was a great adventure film full of surprise, humour, heart and creativity. It struck home with some serious issues about environmental exploitation, trust, loyalty and morality, as well as the corrupting nature of absolute power which often results in tyranny. Themes of friendship, family and teamwork were then championed as a means of survival and redemption. 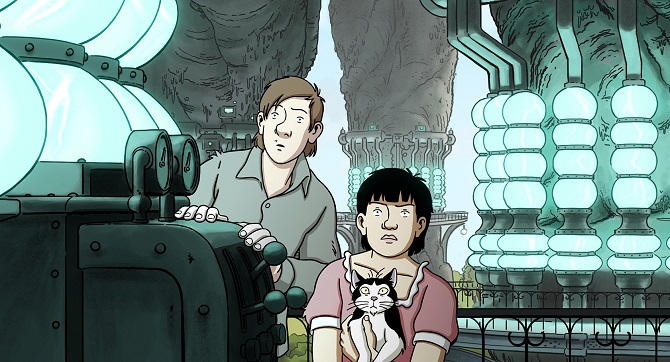 Taking a different direction from the computer generated works of Disney and Pixar, the sketched, ligne claire quality kept with the source-text graphic novels by Jacques Tardi. It ignited feelings of nostalgia towards past favourite comic books such as Hergeâ€™s The Adventures of TinTin. By providing another point of reference combining past and present structural elements created a unique perspective.

The French-Belgian-Canadian feature presented a fresh coming-of-age story. It offered a strong female lead who broke glass ceilings and crossed boundaries, found friends in the most unexpected places and through metaphor, irony, sarcasm and geniality, showed a passion for life so evidently French.

April and the Extraordinary World is being screened as part the 2016 Alliance Francaise French Film Festival. For more information about screening times at Palace Cinemas click here.

A taste of Vietnam: CafÃ© Ã“-Mai