The surreal merges with the mundane in Vivarium: a thriller all about the suffocating, horrifyingly predictable nature of suburban life.

Gemma (Imogen Poots) and Tom (Jessie Eisenberg) are a couple taking the next step in their relationship and looking to buy a house together. This leads them to a quirky real estate agent – played by Jonathan Aris who probably needed a dental visit after all the scenery he chews – who takes them to a mysterious suburb filled with identical homes but not another soul in sight.

Things take a turn for the strange when Gemma and Tom cannot find their way out of the housing development and become trapped within its endlessly repeating streets. Parcels of supplies begin appearing at their doorstep, one of which contains an infant boy with a message asking them to raise him. That boy ages at an accelerated rate and begins mimicking the voice, personality, and mannerisms of his two terrified carers.

From there, Vivarium unravels into a mind-bending exploration of the “ideal” middle class lifestyle and how its trappings can be destabilising and even nightmarish. Director Lorcan Finnegan infuses the film with surreal imagery that heightens the bizarre story elements. I was particularly unnerved by the boy; whose voice is a disturbing mashup of Gemma’s and Tom’s and whose unwavering stare had the hairs on the back of my neck standing to attention. 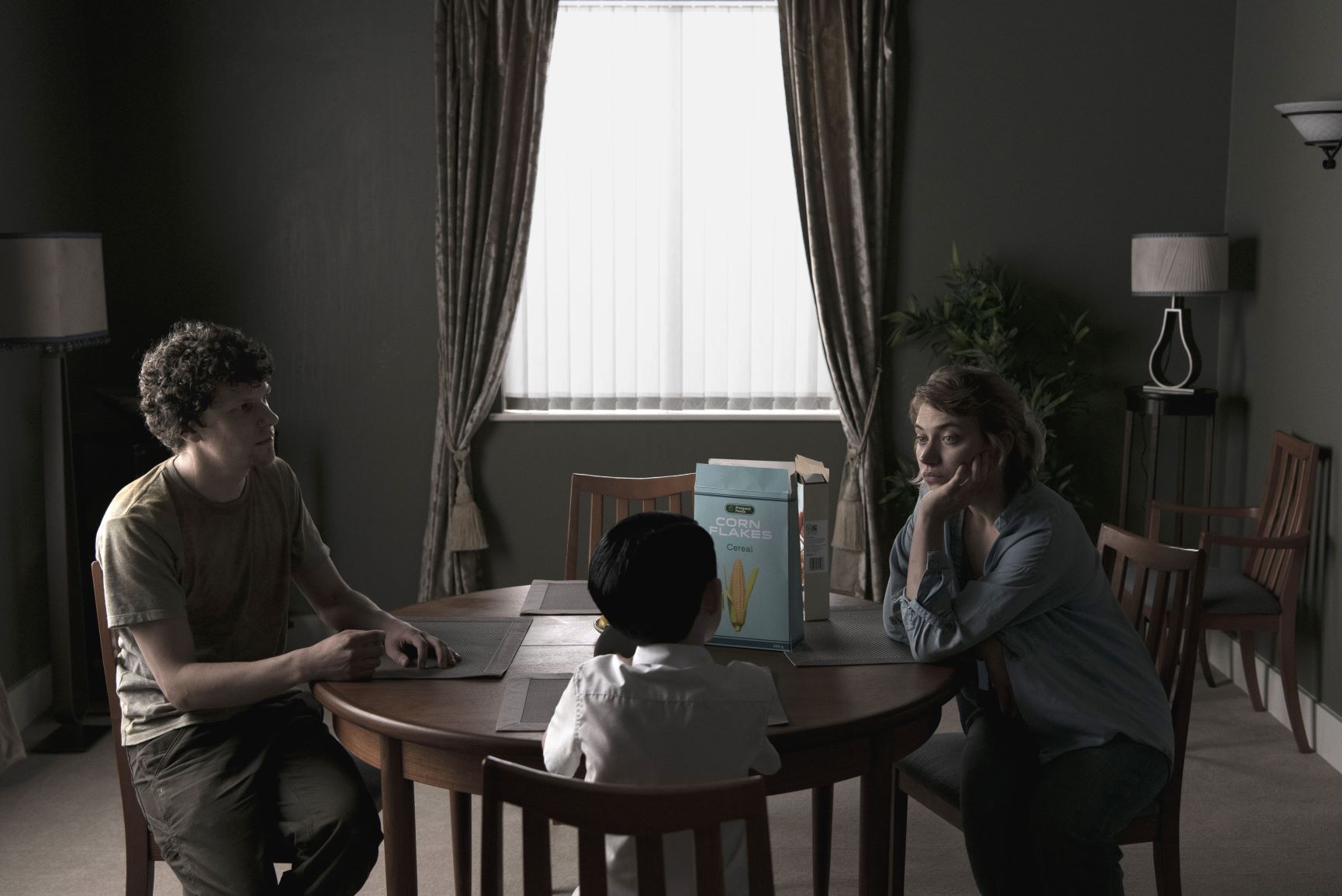 The set design and colour pallet do a wonderful job visually expressing the film’s theme of claustrophobic normality. The houses, sky, and clouds are all washed in muted pastels driving home the feeling of sanitised soullessness. Everything in the suburb looks the same, meaning its personality is a complete absence of personality and the concept of the individual has no room to grow.

Rooting the film from completely disconnecting with the real world are Poots’ and Eisenberg’s performances. Their resolve to escape the suburb is countered by a festering feeling of hopelessness, but their charming chemistry adds some much-needed levity to Vivarium’s tone. I genuinely wanted them to make it out as their humanity felt intensified by the dehumanising environment they were trapped within.

With that said, I did find some parts of their character arcs to drag a bit. I could buy into their sudden mood swings as being a result of their growing frustration, but some of their behaviour didn’t feel earned with not enough build up showing what lead them down a certain path. Also, Tom essentially disappears for some of the film digging a hole in their front yard and it felt like a cheap way to write him off for a number of scenes.

The ending may also leave some viewers feeling unsatisfied. I personally enjoyed how the film’s style descends into more and more trippy territory, reflecting the diminishing headspace of the characters as their environment claws away at their will to fight back. However, without spoiling anything specific, I actually wish more of the film was left to interpretation so that the thought-provoking themes could stand on their own without supernatural explanations intervening. 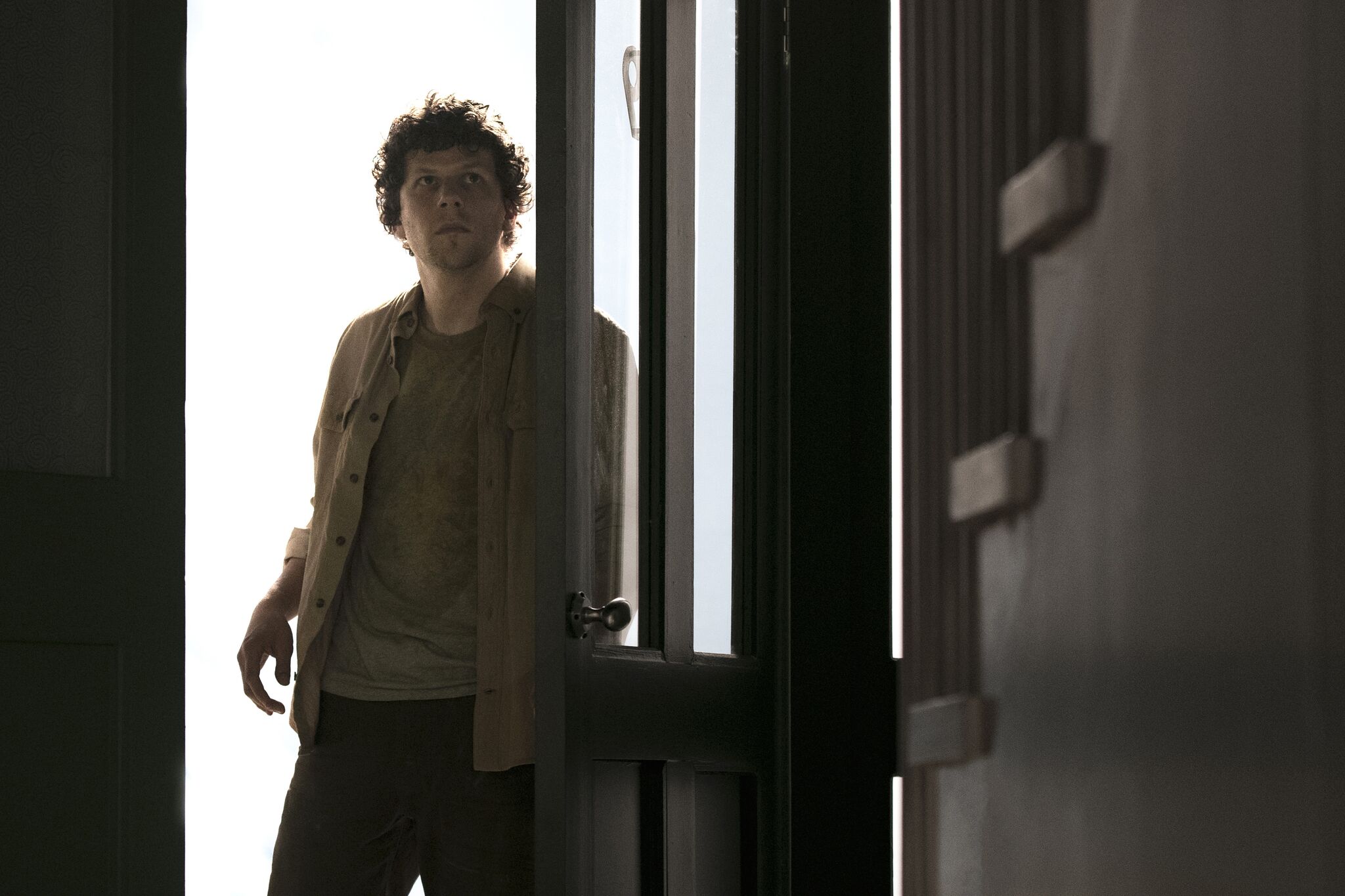 One last point I want to make is a precautionary warning for anyone who wants to check Vivarium out. In our current climate of social distancing and having to spend most of our time at home, a film about cabin fever being taken to the extreme with horrific implications and the portrayal of unstable mental states may not be the best choice to watch if you aren’t coping too well with this pandemic lockdown. This is in no way the fault of the film or filmmakers – as they had no way to predict this present situation – but if you are looking for uplifting escapism in your entertainment, then this isn’t the film for you.

Other than that, I found Vivarium to be a thrilling – if flawed – dissection of how everyday life can be a terrifying reality when no exit is in sight. The surrealism that dictates the film’s style gives it a memorable edge, even when the pacing occasionally stumbles over itself. It may not be for everyone – and certainly not at this time in our history – but Vivarium had me invested in its characters and their plight to escape the horrors of a life they never chose, but which mirrors so much of their initial dreams.

Breaking the sigma with Rebel Rebel