#FirstWorldWhiteGirls Hold A Mirror Up To Society

In a society where we have a lot of big things happening all around us, we still find the time to worry about the smallest of issues.

Comedy queens Judy Hainsworth and Kaitlin Oliver Parker have created a show around our first world problems and it has resulted in a hysterical production that explores everything that we love to whinge about.

Too many Instagram filters to choose from? Too cold with the air-con on but too hot with it off? These are the problems Judy and Kaitlin explore as they transform into the side-splitting characters of trust fund princess Tiffany and day-drinking trophy wife Kendall in #FirstWorldWhiteGirls.
#FirstWorldWhiteGirls debuted at the Judy in 2014 with a sell-out season and has since played to sell-out venues across Australia. The comedic show is born out of todayâ€™s pop culture â€“ social media, reality shows, celebrity, consumerism, paleo diets, Nutribullets, food trucks and smashed avocado. Fictional characters Tiffany and Kendall are the products of these trappings and as you have probably already guessed by now, #FirstWorldWhiteGirls is a satirical take on modern society.

The show followed more of a stand-up style than a narrative one and incorporated musical numbers and audience interaction to keep the pace of the show flowing well.Â Hainsworth and Parker proved that they are a strong duo as they showcased their vocal talents in a wide range of original laugh out loud songs. Without giving too much away, a crowd favourite was a song about Kim Kardashian that had the audience in stitches. Their timing and facial expressions were flawless and it resulted in a performance that had the audience crying with laughter. 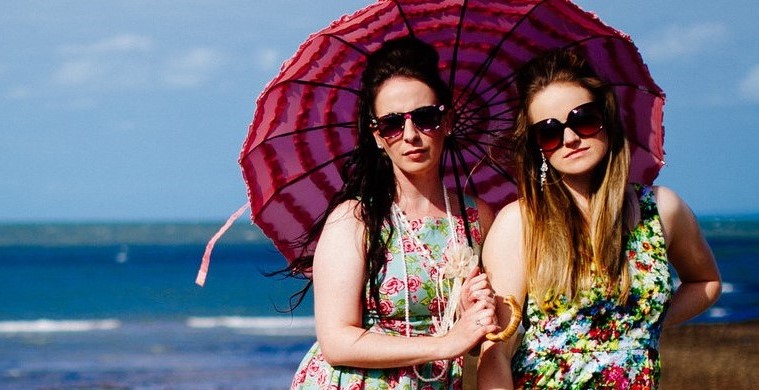 The jokes pushed the boundaries but because they were all in song format we hardly had time to focus on it before we were laughing our heads off at the next inappropriate Brangelina joke.The show does highlight the pettiness of our â€˜problemsâ€™ and openly mocks them. The show isn’t meant to make the audience feel bad but rather help them to reflect on their own problems. Part of the show’s charm is that the girls are able to have a laugh at themselves and not take anything too seriously.

The 70 minute show also provided the audience with the chance to share their own #firstworldproblems. I wrote my own problem down on the white slip of paper and realised just how pathetic it was, ‘When Â you need to blow dry your hair but you’re scared you might get heatstroke because it’s Summer and you live in Australia.’ I finally understood what these girls were talking about. So as we all stood up and raised our fists in the air and said in unison, â€˜first world problems are real problems!â€™ I said it loudly. I knew it was stupid. I knew they were’t REAL problems but in a world full of horrible ones, it’s nice to just joke around even just for 70 minutes.

Tom Gleeson Is On Top Of His Game