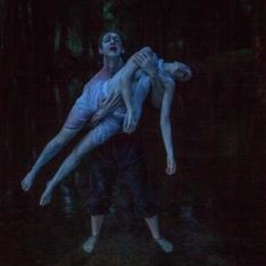 It is clear that the foundations of this new interpretation are strong despite the few minor hiccups that crept into its first public outing. Mime, music and hypnotizing physical theatre have been cleverly combined to create a production that is thrilling in every sense of the word.

The director is Brenna Lee-Cooney. She is joined by a talented group of actors including Eugene Gilfedder and Andrew Lowe, who previously starred in Carol Burns’ Picnic at Hanging Rock.

Together, they have managed to breathe new life into Mary Shelleyâ€™s classic work. For those already familiar with the haunting gothic novel, this latest offering from Fractal will be a welcome reimagining. For those whose understanding of Frankenstein extends no further than his creation of a monster, the show is a revelation. It is a beautifully rendered tale of humanity and the importance of family, loss and misunderstanding.

The play is clealy physically demanding, yet the committment of each actor to their respective roles is total. If the performers struggled to maintain their momentum throughout the two hour play, it was well disguised.

The narrative itself is also complex; time and place are in constant flux. It is a testament to the productionâ€™s design and direction that each location is able to be vividly rendered in the mind of audience members.

What emerges is anÂ almost cinematic experienceÂ that is both funny and tragic, and helped substantially along by its soundtrack. Frankenstein walks a fine line between melodrama and those emotionally-charged raw moments that truly draw the viewer into the lives of the characters on stage. One is left with the sense that some of the more peripheral characters have a much more layered story to tell than is shared with the audience. It is a shame, but understandable given the limitations of theatre.

Young Frankenstein discovers all too late that curiosity can be a dangerous thing at times. In the case of this Fractal production, it most definitely is not. Frankenstein finishes on the 18th of May; on Saturday the 11th of May, a special midnight performance will be held (thereâ€™s is a special prize for the dressed corpse bride and Monster). Unlike for Shelleyâ€™s characters, it is sure to be an evening you wonâ€™t regret.

Kerstin was a guest of the Brisbane Arts Theatre.