From the Ashes a Fire Shall be Woken: IMA's Tim Riley Walsh

From Saturday, January 30, Brisbane residents will see the Valley’s Institute of Modern Art (IMA) come alive with a brand-new contemporary art exhibition. On Fire: Climate and Crisis will focus on the recent Black Summer of 2019-2020 and the impacts of this tragedy.

The Creative Issue had a chance to catch up with art historian and curator, Tim Riley Walsh before the event.

Firstly, we wanted to get a bit of background about what it meant to be an art historian and curator in 2021. Born and bred in sunny Brisbane, Tim found a deep love and appreciation for art from an early age.

His father, an artist himself, afforded Tim a deeper insight into this mysterious world and after being encouraged to study art history by his teachers, Tim never looked back, forging his way through the industry, and recently completing a thesis on the late Gordon Bennett in 2019. Tim shared his thoughts on the rewards of his job.

“So much of the work takes place in the mind – building a concept, learning to trust your knowledge and experience with artworks and artists’ practices as they link with those thoughts. If you’re researching for an exhibition 18 or 24 months in advance, it begins from this place of intuition and spark; ideas at least emerge for me as I read and start to build toward this foggy picture.

“I’ve found a great deal of benefit using CAD software to help in the early stages – the digital equivalent of a scale model where you can move and place works at whim. This way you can work through relationships between different works, which sits well and helps to build a narrative or message or echo the concerns of the exhibition.

“It makes those initial thoughts more tangible – it starts to come into focus. That initial uncertainty can be difficult. The real joy though is in seeing new works being developed and then everything arriving and falling into place in the gallery space – we’re in the midst of that at the moment, and I feel very energised by the experience.” 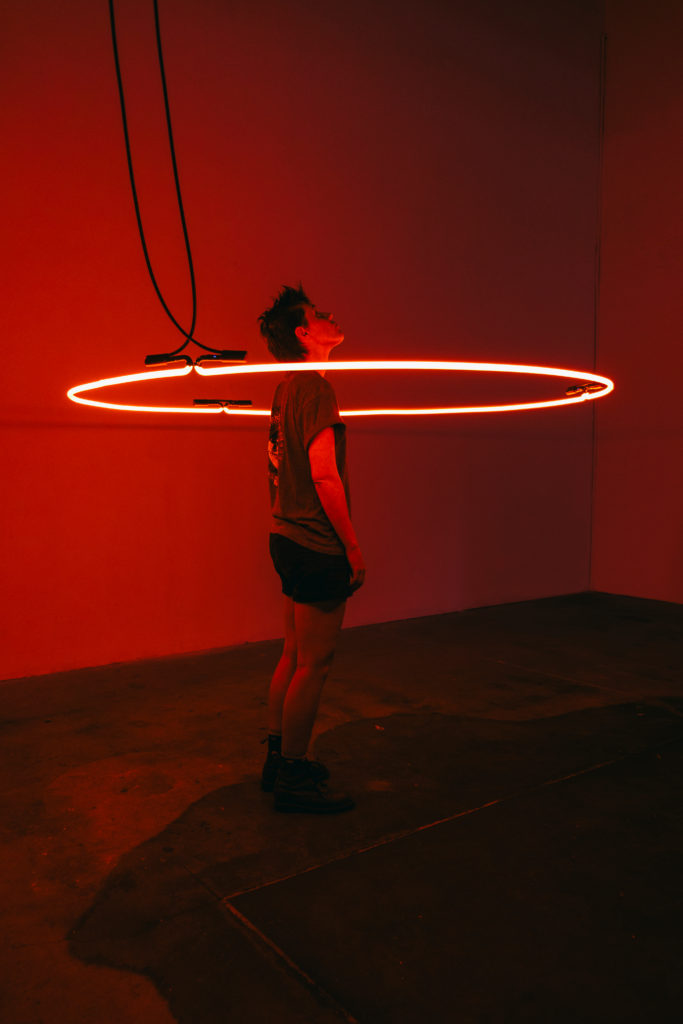 “Well it is a very rewarding career path, but one that I think remains difficult for the public to grasp the benefit of – it is hard to shake the image of someone who is aloof and intellectually indulgent. I hope that I help to dispel some of that by being honest and earnest. I see the work as being mostly a conduit (never a barrier) between artwork and gallery and public, helping to situate ideas about the world within a particular framework that will hopefully help to introduce new ideas to viewers.”

“Art and culture more broadly is the bedrock for slowly influencing public and social thought – challenging views and perceptions, vestiges of the past that might be inhibiting us from a fuller potential.”

“It sounds slightly absurd, but we’ve all had an experience with a film or a painting where we have stepped away and felt turned upside down by it. In 2021, it feels important to help direct those experiences towards topics that demand fuller visibility.”

We then asked Tim about the importance of creating art that speaks on a deeper level about broader issues – Climate Change being one pertinent issue. Tim took the time to reflect on his previous statements and stated firmly that it is “truly vital.” To him, art is something that is volatile and fragile, often “the first thing to on the proverbial bonfire in a moment of emergency or crisis.” Which perplexes him, and echoes the sentiments of many within the arts industry.

“It is the way we make sense of the world and its complexity. I would feel lost without its direction or perspective. It is a way to also approach people who might feel very passionately about a particular position that is causing friction and disharmony.”

“Waanyi artist Judy Watson who is part of On Fire: Climate & Crisis said recently that “if you make people feel, that is when they think” – emotion and feeling are clearly central to art that seeks a more engaged public, that hopes to shift perceptions around the seriousness of the present environmental situation.”

So how did all these world events become what On Fire hopes to speak about through its art?

“The show emerged from my arrival back in the country from a trip to Europe. I landed into the November bushfire smoke that was blanketing Brisbane, that would go on to turn the Sydney sun that disquieting orange, and Mallacoota’s the red hue of a sea flare…. It felt like global warming’s impacts were becoming more and more tangible.”

“I felt like there was an opportunity to reach out to a number of artists I thought would have something to say about the influences on this situation – including the Los Angeles-based Jemima Wyman, as well as more local practitioners like Warraba Weatherall, Judy Watson, Michael Candy, Dale Harding, Kinly Grey. Each, as well as the other artists who make up the fifteen overall, have made a direct or indirect reference to the natural world – so it has become a broader show that reflects this country’s complicated legacies and their influence on the present.” 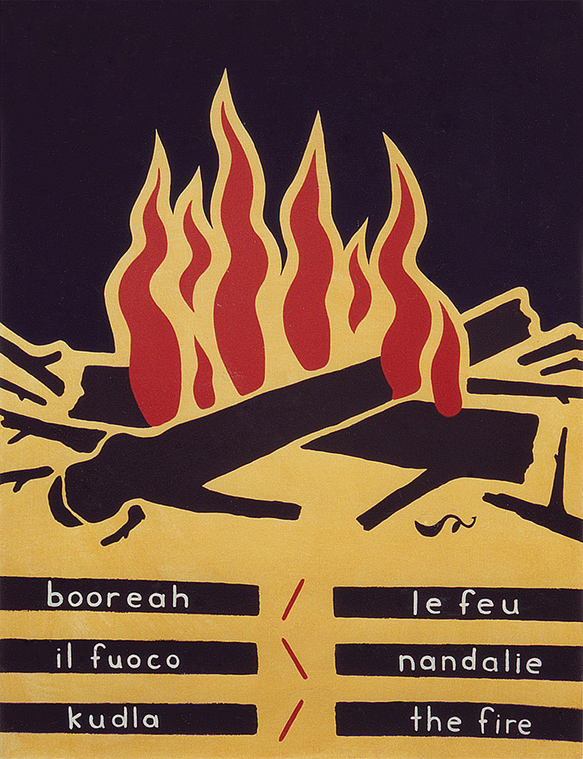 Nearing the end of the interview, we wanted to understand what makes a multi-medium focussed exhibition, and why it was important for On Fire to demonstrate different styles of art.

“When you place all of these approaches in a gallery space in specific ways and combinations, a different kind of conversation emerges. You are able to say something in a way that isn’t typical and can generate new and important ideas. I feel visitors will understand this when they visit On Fire: Climate & Crisis – there is truly something for everyone, painting, printmaking, installation, video, sculpture.”

The penultimate question focussed on the upcoming exhibition itself. What can audiences expect from the art to be displayed? To Tim, it was imperative to have Queensland voices expressing their opinions about the climate crisis that has been impacting not only Australia but the world at large.

“After 2020’s many twists and turns, this show aims to re-center a conversation in this state and country around the severe threats facing our diverse ecologies. COVID-19 is not a separate issue – compelling scientific evidence released by the United Nations and World Health Organisation shows that habitat destruction and the decreasing space for animal life has an impact on the spread of zoonotic viruses. This is reflected in the show.”

“Michael Candy’s Azimuth is a robotic sculpture that functions as an abstract timepiece – ticking slowly around a gallery like the second hand of a clock. Its surface is covered in UV-C bulbs – so as it moves, it cleanses the environment of germs.”

“The public views the work from behind a protective welding curtain. Kinly Grey’s vereor is a custom-built projection room whose walls capture what at first appear to be spiraling plumes of smoke – as viewers enter the work, these expectations are challenged, reflecting on the importance of having reverence of nature’s power and force.”

“Hannah Brontë’s video work Umma’s Tongue–Molten at 6000° is structured like a music video with percussive beats and rap lyrics that provide a voice for the Earth’s pain and is spoken through a matriarchy of First Nations women. There is an important variety to the exhibition works that I hope will capture the public’s attention.”

Finally, we rounded out the interview with any parting words Tim might have regarding what we spoke about today.

“I would really encourage visitors to come and experience these works for themselves, with the hope they walk away feeling emboldened and energised. We need this to help shift the balance in the planet’s favour.”

After the interview came to a close, it became apparent that after all we had spoken about, there remains much to discuss regarding what has and continues to happen in the world. From what was said in this interview, it is clear that artists have been suffering through these uncertain times. Yet they continue to create. It is this hope in creation that we find less uncertainty and hopefully, time to reflect on what we truly value.

The Details:
What: On Fire: Climate and Crisis
When: 30 Jan – 20 March 2021
Where: IMA – Ground Floor Judith Wright Centre of Contemporary Arts, 420 Brunswick St, Fortitude Valley QLD 4006
How Much: Free entry