All About In Character

Winter afternoons seem made for darkened movie theatres, and the Gallery of Modern Artâ€™s (GOMA) latest cinema project In Character has just the ticket for those lazy days.

Last week we caught the screenings of Candyman and All About Eve, which are just two of more than one hundred films showing as part of In Character.

A 90s horror about an urban legend and a 50s drama about vying Broadway starlets might seem a strange mix, but the pairing makes more sense when you consider the female characters leading them.Â In Character explores filmic representations of women. The exhibition will be screening an array of films featuring female characters who defy expectations.Â Inspired by the Cindy Sherman exhibition currently running at the GOMA, this cinema project attempts to extend the artistâ€™s photographic exploration of identity formation.

Shermanâ€™s exaggerated character portraits remind us how very constructed self-identity is; In Character shows us not only the exaggerations of female archetypes, but also how characters push the bounds of female identity â€“ behaviourally, physically or otherwise.

One of these characters is Candymanâ€™s Helen Lyle (Virginia Madsen) who, while writing a thesis on urban legends, finds herself targeted by the very figure she is researching: Candyman. 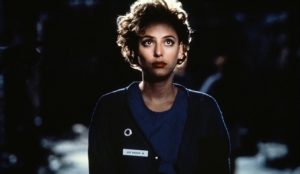 With his hefty, fur-trimmed coat, deep, compelling voice and hook for a hand, Candyman (Tony Todd) wants Helen as his next victim â€“ but Helen doesnâ€™t do victim well.Â She explores drug dens alone, survives violent assaults, testifies against perpetrators when no one else will, calls out her pompous male colleagues, speaks out against racism and never stays down for long.

Sheâ€™s the woman we want to be â€“ particularly in a murder-filled horror scenario, where (unlike so many others) she isnâ€™t reduced to running around screaming in her underwear.

In the 50s classic All About Eve, the horror is (gasp!) a woman who wants a successful career.Â The Academy Award-winning film chronicles the rise of the ruthlessly ambitious, aspiring actress Eve Harrington (Anne Baxter), who inserts herself into the life of talented Broadway star Margo Channing (Bette Davis) and lies, blackmails and manipulates her way to the spotlight.Â In Eve, this desire for a career incites a single-mindedness that causes her to use people with little regard which extends to an almost sociopathic level.

Whether itâ€™s sociopaths or survivors you want, there are still plenty more films to see, including Basic Instinct, Eyes Without a Face, Breakfast at Tiffanyâ€™s, Mulholland Drive and Sunset Boulevard to name a few.

We’re looking forward to the screenings of What Ever Happened to Baby Jane? and Misery in mid-July. There will also be a series of free In Character cinema events in August.

THE DETAILS
What: In Character cinema project
Where: The Gallery of Modern Art, Brisbane
When: 28th May â€“ 28th August 2016
Cost: Adult $9 / Concession and child $7 / Member * $6
More information: Visit the GOMA website

Whatâ€™s on at the Maroochy Music and Visual Arts Festival