Forever soaring Perth band Great Gable have recently announced their debut album, Tracing Faces… so check these spaces! Read our chat below and check the tour dates at the bottom of the Q&A so you can catch a post-isolation gig at town or city near you.

The Creative Issue: Hey Great Gable! How are you handling life over in Western Australia at the moment?

ALEX: Everything is seeming to be going back to normal as each week passes… Gigs and going to the pub still feel like they’re a while off though! We’ve just been hanging out and writing heaps so that’s been good.

TCI: Further on your location, which surrounds influence your sound?

CHRIS: Definitely. Music Farm, where we recorded our album, it’s in the middle of the bush, half way between Mullumbimby and Byron Bay. When one of us wasn’t recording our parts for a song, it’s likely that we were off walking around the grounds or sitting under a tree near by taking in the beautiful surroundings. Before Music Farm, we took a handful of trips down south in WA were we rented an Airbnb in the bush and demoed the songs that ended up on the album. Each place influenced the songs in their own way.

TCI: Are there any artists from WA we should know about?

TCI: How did the band start?

Great Gable: So Al & Preeny met playing cricket down in Bunbury just after high-school, then started jamming together. Cal met Alex at WAAPA in Perth when they were both studying there. Cal thought Alex had a sick voice so asked if he could jam with him. The band started with a different bass player but when he left Cal introduced Chris to the guys and he’s been with the band ever since.

TCI: Congrats on the release of another cracking single! I notice a similar psychedelic theme coming through on your single art- is this a new direction?

MATT: Cheers! Yeah really stoked on the artwork that Nomad Create. The artwork for ‘Blur’ is probably the first time I’ve ever been totally happy with the first idea a designer sent through. We’ve definitely got a bit of a theme going for the artwork for the singles and album. It’s a bit of a different style to our older stuff but still ties in with our vibe. 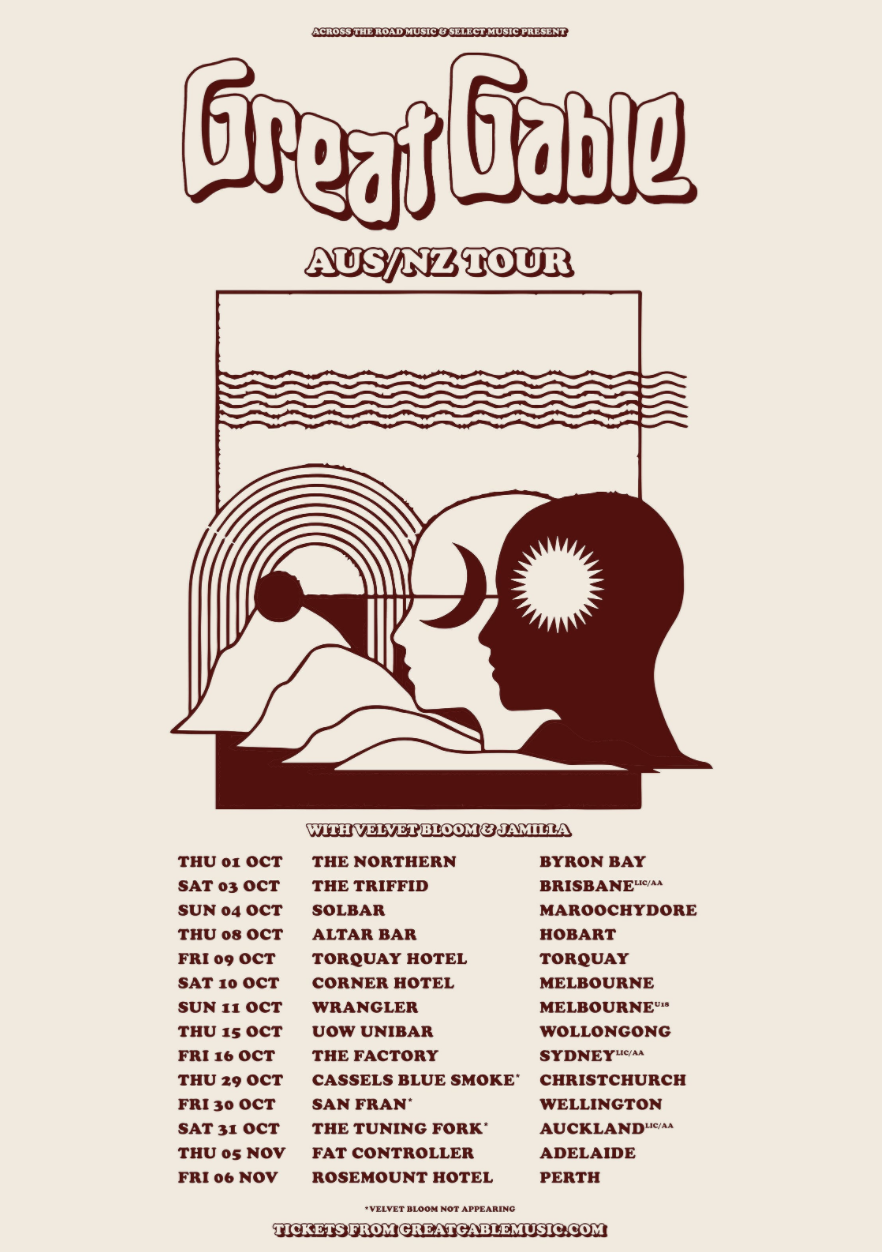 TCI: Is the new album heading that way?

MATT: The album is very much its own thing but still has elements of our older songs in there. Working with Matt Corby and Alex Henriksson really helped us look at our music in a different perspective and this reflects in the finished album.

TCI: How has the creation process been for the new album? (individually and as a band)

CHRIS: Each song is different to the other. Some began as an iPhone voice memo from jam in a rehearsal which we then took to Preeny’s home studio to work on further. A handful began as ideas in Preeny’s studio, where each of us come in either together or individually to lay down our parts. And a few began in the basement home studio of Alex Henriksson (who produced the album).

TCI: Can you tell us a little bit about what’s behind your new single, ‘Blur’?

ALEX:  ‘Blur’ is a fun little tune about the ups and downs of hittin’ the road with the band. We wrote it down south in WA at a chestnut farm, on one of our writing trips. It was one of those songs that came together really quickly.

TCI: Your new album is titled Tracing Faces – what inspired that catchy name?

CAL: ‘Tracing Faces’ is just the name of one of our songs and we were like yeah that sounds like a good name. It was really hard coming up with an album name!

TCI: If you could see one live show (past, present or future) who would it be?

ALEX: One of the rooftop gigs that The Beatles put on.

CAL: Would love to see Pendulum live at Glastonbury back when it was huge, like 2009 or 11 I think.

Tracing Faces is officially released on August 7th, with Great Gable kicking off their tour in Byron Bay on the 1st of October. Until the tour, watch their self-made double denim infused music video to new single Blur.

Keeping up with Kiara-Bella Designs