Add John Carpenter’s Original Assault on Precinct 13 with The Decline of Western Civilisation Part 1, throw in some neo-nazis; and you got yourself a surprisingly fantastic contemporary horror thriller.Â

If you’ve ever been to a punk rock concert, you’d understand that there is no actual method to capture the raw power and intensity of the experience. Well, Green Room actually captures that experience, successfully.

Green Room, the third film by director Jeremy Saulnier,Â follows the fictional hardcore punk band “The Ain’t Rights” and their trainwreck of a concert at a bar owned by a group of neo-Nazi skinheads. The film takes a turn after the band performs an offensive Dead Kennedy’s cover and witnesses a murder undertaken by the neo-Nazi’s; aÂ bloodthirstyÂ and intense fight ensues for the rest of the film. 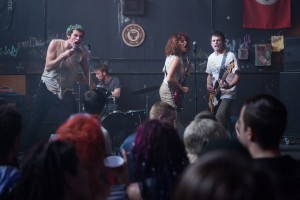 The film is marketed as a horror, howeverÂ it isn’t a traditional horror film; although, from themes of violence, realism and edge-of-your-seat thrills, one can classify it as a realistic horror film. Alike the film Cloverfield Lane, which was also released earlier this year, Green Room portraysÂ a closed environment and atmosphere inside of the green room of the bar (where bands prepare for their concerts), thus creating a sense of claustrophobia and wanting of escape.Â What must be noted is the fact that this was not at all featured in the trailer of the film, adding the element of surprise – going into Green Room with no expectations should be recommended since you will probably be bewildered at what you experience

The actors are casted out of typecast, which is revitalising yet also weird to see some of the actors portray punks and skinheads. Casting includes Patrick Stewart as a head of the neo-Nazis (Yes, Star Trek: Generation’s Patrick Stewart as a skinhead), Alia Shawkat (Arrested Development) as the band’s guitarist and Imogen Poots as a female neo-Nazi caught up inÂ the mess. 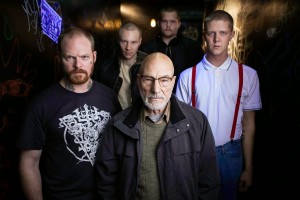 It is astonishing that the film captures the excitement and raw power of a concert from the mosh pit to the stage. Imagine slow motion mosh pit madness involving punks and neo-Nazis – it’s an underrated scene from a film build up on realistic horror and thrills.

Green Room needs to be experienced to be believed. This review attempts to not spoil the excitement and devastation of the film, because it seriously shouldn’t be ruined for those who haven’t seen it.

The film is an experience. 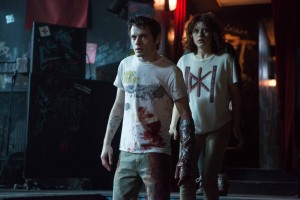 Green Room runsÂ at the Dendy Portside cinema fromÂ the 12th of May to the 18th of May. The film unfortunately has a limited run in Australia, so see it while you can!

Not Looking At The Pictures: Mapplethorpe

All Mirth and No Matter: QTC’s Delightful Much Ado About Nothing