HANNI Talks QMAs and Next Steps

TCI gets a glimpse in HANNI‘s mind as she prepares for the QMAs and releasing new music.

17-year-old Hannah has been slaving away in studios since graduating from Brisbane’s Music Industry College in 2018 and has no plan on slowing down for 2020. Under the moniker HANNI, she intrigued the industry in July last year with her debut single ‘WIRED‘ and has been nominated in the Schools Category of the 2020 Queensland Music Awards alongside Charlie Darling, Jacob Biermann and Toby Hobart. As HANNI keeps adding dot points to her resume, anticipation is rising to see her crush some goals.

The Creative Issue: What does being nominated for QMA represent to you and your work?

HANNI: Being nominated for a QMA is a significant milestone in my career, like any musician you put your heart, soul, blood, sweat and tears into creating your music in the hopes that people love what you are creating as much as you do. So, to receive this nomination is confirmation that I have chosen the right path in following my passion for music, that all the time and effort is worth it. This nomination has made me more motivated to achieve my goals and as this is only the start of my career, I hope this is one of many QMA nominations.

TCI: What was your reaction when you found out you were nominated for your award?

H: How was my reaction to finding out I was nominated? Well, I was in the studio with my producer recording my new single ‘Crazy’ and my phone rang, as I didn’t know the number I didn’t pick up (my bad). I messaged the number asking who it was, with a response It’s Gav from QMusic, I let him know that I was in a session and that I could call him later or tomorrow. Gav responded “No stress at all, whichever is easier. It’s just about your entry to the QMA’s.” I had a mini flip out in the studio then got back down to work, but still was wondering what was the news that I was going to receive the following day. Finally spoke with Gav the next day, to be informed I was a finalist, I was shocked, I think I said thank you a couple times too many.

TCI: What is your favourite part about being involved with Queensland’s music community?

H: My favourite part about being involved in Queensland’s music community is the people. You only have to look at the calibre of this year’s finalists to see just how incredible and inspiring musicians are coming out of QLD, who wouldn’t want to be a part of such an amazing group of people.
But what makes this community even more amazing is that not only are several QLD musicians getting their time in the spotlight, but still making time to give back and supporting other emerging musicians. 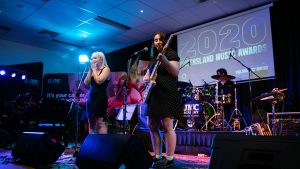 TCI: Can you describe the creative forces and inspirations behind your work?

H: The inspiration for my work is always based on my life experience and I seem to do my best work when I’m upset about something. Like most musicians I find it easier to write sad songs and to be honest they are mostly about relationships with silly boys or friendships. Sometimes I find that I don’t have the word to verbalise a situation or my feelings but I can always create lyrics even if they are a little bit cryptic sometimes you will always find the underlying message. I do feel sorry some of the time for closest people in my life as they are bound to feature in one of my songs at some point!

TCI: What are your plans looking forward to in the coming year?

H: My plans for the next twelve months are to focus 110% on my music. I have a wall full of music related goals for this year, as there are too many to list, these are some of the highlights:
· Release three singles, first single ‘CRAZY’ releases end of March
· Release my first Music video for ‘CRAZY’ early April
· Release an EP
· Be a headlining Act
And all in all just make as much music as I possibly can.

TCI: Would you be open to working with another QMA nominee and if there is what about them and their work really grabs your attention?

H: I must admit I LOVE Asha Jefferies and have been a big fan for several years. But I have also been lucky enough to have her as my mentor for the past 2 years thanks to Music Industry College. I’m also a massive fan of Golden Vessel and love his amazing production and would love to work with him!

TCI: What are your best tips for dealing with nerves when it comes to performing?

H: To be honest I still struggle with nerves sometimes, my voices get all shaky. My advice is to know what makes you nervous, work out how to manage it or have a workaround for it. For me I know that I’m more nervous about talking than performing, so when I’m doing a full set, I will sing a song before I do a lot of talking. Prior to performing I put myself in the right state, I tell myself that everyone makes mistakes even famous musicians, no one is perfect but to go out and give it my all.

H: Brisbane most definitely has amazing performance venues, but the top of my list for performing in this far is the Triffid, followed by Black Bar Lodge. I love the Triffid as it is such a unique building, which provides an amazing sound and to sing to a sold-out room of that size is a rush. Black Bear Lodge on the other hand also has an amazing sound but I like that it has a more intimate feel.
I look forward to the day that I’m big enough to sell out Riverstage as I have seen some of my favourite artists perform there and hope that one day I can perform there too.

TCI: Given the Schools category at the QMA’s, what would be your best tip for young musicians?

H: My best tip for a young Musician would be don’t try and compare yourself to others, every musician has their own journey that is unique, if you spend too much time comparing yourself you will not have time to be you. I’m not saying you shouldn’t have other artists or mentors or people you look up to, what I’m saying is setting your own goals, setting your own path and journey, just keep creating music that you are passionate about and the rest will follow.

TCI: What’s one thing that you would like to see come out of the Queensland music scene?

H: I would love if there was such a thing that artists could go to a hangout place with studios, writing rooms, hangout rooms and more and that it would kind of work like a library in the sense of paying to be a member to use the facilities. And at this place there could be mentor workshops, production courses, lessons but mainly the focus of the building would be to bring artists together and have people connect. Also having a community forum where people can find producers, music video creators, band members and so much more (this part of it could be as simple as a closed Facebook page). This whole idea just makes it easier for artists to connect and support each other.

Splendour In The Grass 2020 Has Sold Out