Hansel and Gretel: A Classic Remade

OperaQ and shake & stir theatre co. have come together to recreate Hansel and Gretel for kids in Queensland.

Hansel and Gretel is a story we are all familiar with. OperaQ and shake & stir have collaborated in recreating Engelbert Humperdinck’s classic opera and presenting it to primary school kids in South East Queensland. The Creative Issue sat down with Jessica Low, who plays Hansel, and the director, Ross Balbuziente to get their thoughts on the classic and the collaboration.

The Creative Issue: Originally Hansel and Gretel is quite a dark story, how have you lightened it for the kids?

Ross Balbuziente: Well, to be honest, we’ve kept some dark moments within it but sprinkled a lot of lighter, humorous tones throughout it. We love the story because of its sense of danger and encountering things a little foreign to us. So we’ve maintained that element of the classic. But then we can oppose that with some really light and very funny elements.

TCI: How have the shows been so far?

Jessica Low: Great. We literally just finished one, we literally packed the van five minutes ago and they’ve been great. We’ve only had three days this week because of the EKKA Holiday. But it’s been so wonderful to have such a great response from the kids because in the rehearsal room, you just don’t know what jokes and what things kids are going to laugh at until you have a real audience there.

RB: Yeah, great. shake & stir and OperaQ have collaborated twice now on creating essentially an original opera for primary aged students based on classics. So we did FiZZ! three years ago, and it has toured throughout Queensland since then, it was based on Donizetti’s Elixir of Love. It’s a really beautiful opera and we completely reworked that and set it in a modern convenience store but still maintained some of the beautiful arias and musical moments from the original. With Hansel and Gretel, we have reimagined it but we haven’t done too much rejigging as audiences are familiar with the story. We really focused on making sure that the opera and the drama is really well blended and there’s this marriage between those. But specifically really appealing for young kids, the show’s been on the road now for three weeks and it’s already receiving great responses from students of all ages. It’s also really heartwarming to see adults and teachers thigh-slapping themselves throughout the performances and that’s what we always try to do. We never talk down to our young audience, we always aim to present live entertainment at their own level, entertainment that speaks to them, not at them. So it’s never patronising and it’s not cringe worthy. That’s what shake & stir pride itself on. We’ve been producing theatre since 2006, theatre of every shape, size and form (for every age). We’ve produced some big national tours of Roald Dahl’s work and Hansel and Gretel is very similar to the work of Dahl where we meet young characters that find themselves in some somewhat scary and grotesque situations. 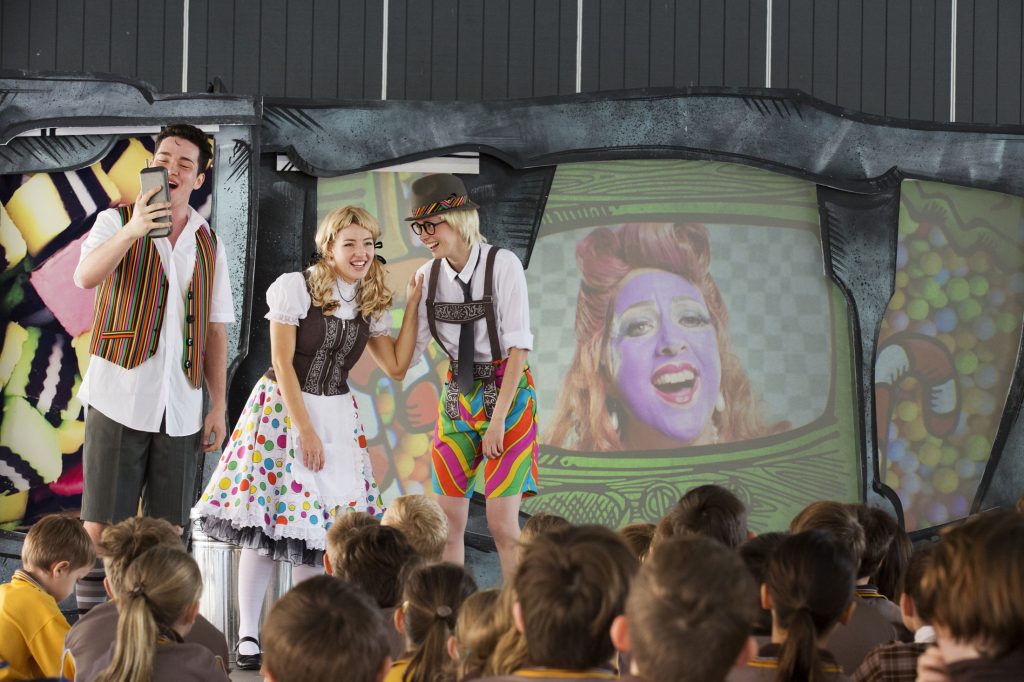 TCI: How is it performing for primary aged kids?

JL: It’s a lot of fun and it really keeps you on your toes because if they don’t like something they definitely let you know straight away or if they think something’s funny, they really laugh a lot. So you can really play things up or extend things if it seems like they’re really enjoying it. It’s quite flexible and it’s an exciting change.

JL: It’s actually not that different from playing a girl. I just think Hansel loves doing lots of naughty farts and annoying Gretel and that’s pretty the only difference. I think children, both girls and boys, are actually really similar. They all get up to mischief, they get scared if they’re threatened. So it’s not too different for me.

TCI: How long have you been with shake & stir, Ross?

RB: I’m one of the co-founding members and established the company in 2006. I’m one of the Artistic Directors and I’ve got the joy of wearing many hats in my role. The passion for what I do has not diminished at all, every single day of my working year is different to the last. It keeps my career really exciting and to be constantly working on developing new work is a treat. I especially love creating work for younger audiences, like Hansel and Gretel, it’s an incredibly rewarding job when you get the fun task of directing a show that essentially is to introduce students to the beautiful art form that is opera. It’s an opportunity that I’ve relished and have thoroughly enjoyed. 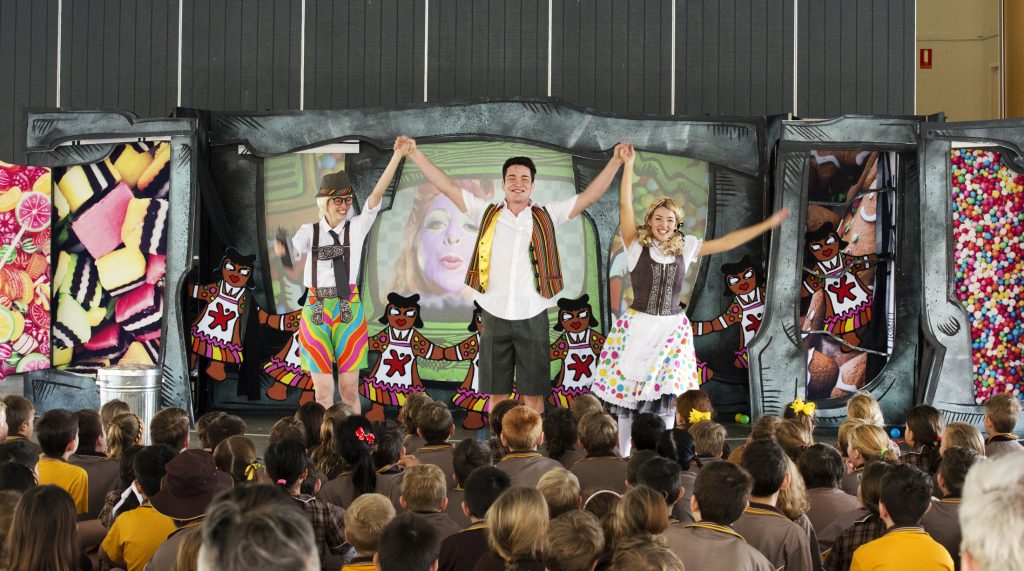 TCI: How did you get into this?

JL: So the show is a collaboration with OperaQ and shake & stir theatre co. So I’m an opera singer with OperaQ and I’ve been singing for years now and working with company for four years. So that’s how I got into doing this show and I also have a background in classical singing.

TCI: Have you worked with shake & stir before?

TCI: Cool, and you’re enjoying it?

JL: Yes, it’s so much fun and it’s so wonderful to have this collaboration. To have their perspective of straight theatre and they do so much performing for kids so they really know what works. Also coming from the OperaQ background of “how can we make the music a really integral part of the show” and it’s a really great collaboration.

TCI: shake & stir used to come to my school and it was always something we really looked forward to.

RB: Haha that is so great to hear. Yeah, the company has much experience with introducing students to Shakespeare, predominantly, and issues that affect students from primary age to secondary and tertiary, through our awareness programming. So this collaboration with OperaQ slots really nicely into our programming in that it’s, at the end of the day, a beautiful, high-quality piece of entertainment but also it serves as this gentle introduction to an art form that has been around for many many many years. The opportunity to present it live for an audience that are potentially experiencing live theatre for the very first time as well as hearing opera singers sing opera right in front of them for the first time – is a privilege we don’t take lightly, it’s an honour.

TCI: What do you think is the best part of the collaboration with shake & stir and OperaQ?

RB: At shake & stir we’re constantly pushing the boundaries with what’s possible when it comes to producing and touring work right around the country. We like to constantly surprise our audiences. With our collaboration with OperaQ, it’s a fantastic opportunity for us to introduce the art form that is opera, coupled with children’s theatre to audiences that are potentially seeing live theatre for the very first time. As I said, it’s an absolute privilege to be creating work that will hopefully be inspiring the next generation of theatre goers and/or artists. It’s an electric collaboration and it’s been ongoing now for four years. It’s really lovely to have the team at OperaQ, who have such a vast experience in the world of opera working with the shake & stir team. And the result is a charming and hilarious piece of live opera – that hopefully will leave our audience hungry for more. Pun intended.

JL: I think it’s just being able to bring an opera that was first performed in something like 1897. We’ve taken the music from that and it’s being performed in a really contemporary way for 21st century primary school kids. I think that’s really exciting, to take an old art form and rejig it, modernise it a little bit, and we’re getting a great reaction so far.

Jessica also explained that there is an option for people who can’t make it to the shows. “[You] can catch us at the OperaQ studio from the 27th to the 30th of September. And tickets are just through OperaQ.” You can grab them here.

What: Hansel and Gretel

A night with Opera Queensland