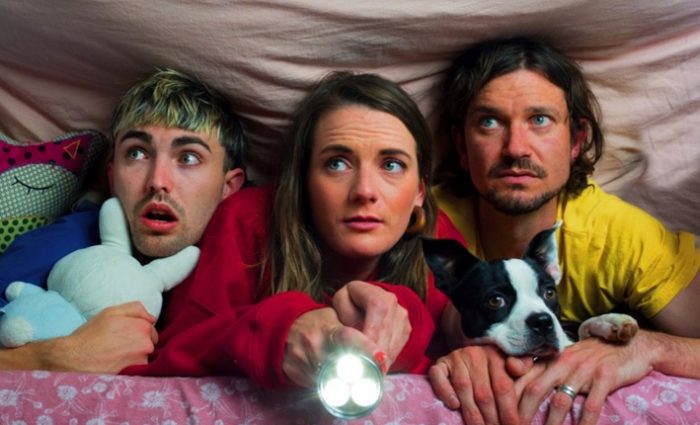 Adelaide locals Heaps Good Friends, known for their bright, down-to-earth persona, have made their highly anticipated return with ‘Fold Laundry Together’.

After successes like their track ‘Let’s Hug Longer’ being the 11th most played song on Triple J in 2017, and lively singles ‘Olympic Sneakers’ and ‘I Could Eat A Full Packet Of Yoyos’ in high rotation on Triple J, Heaps Good Friends are about to release their newest single, ‘Fold Laundry Together’.

The Creative Issue: I’d love to hear more about your new single ‘Fold Laundry Together’. What was your inspiration behind the lyrics of this song?

Emma Fradd: I was visiting my brother and his family in Atlanta. He has a big family, lots of laundry to fold. I was helping with my brother’s friend who was especially cute and lovely. We poured a glass of whiskey and got chatting. I realised then that having a task to do as you’re getting to know someone is GENIUS – shaves off any % of possibly awkwardness. But as with all of our songs, sometimes we mesh a few ideas together.

Some of the verses talk about some good friendships of mine. I had this roommate, Maria, a couple years ago – I would always go into HER room to look in HER mirror. Even though I had my own. I just liked the way I felt in her room. I have this other friend, Justine, who came into my life at the perfect time and showed me how to have fun and look forward to things, it was right after two very intense years of my life. That’s where the bridge lyric came from, “You show me I can expect the good things.” Wow our songs totally promote and affirm good friendships! So glad we chose the band name we did.

TCI: You guys recently released an ASMR-esque meditation video that went into detail about removing the wrinkles from a dress (I almost fell asleep to this by the way), what was the thought process behind this video?

EF: First of all, can I just say how much I love ASMR videos. Secondly, this one was all Nick’s idea! He and Dan seem to think I have a soothing voice? To me it just sounds like… probably how your voice sounds to you, like some annoying child or is it just me? The vision was to produce giggles, deep breathing and pointers on laundry folding. I’m glad you liked it! I love the synth behind it, also the YouTube version is the longer version and there is this one quote we keep saying to each other in our group chat, “Tuck a third of the skirt.” It’s just so golden.

TCI: How is your creative process going during the COVID-19 crisis?

EF: Life has slowed down and I like it. There have been some awful new realities for a lot of people, most of which I may never even comprehend, so I am trying my best to be grateful. I am so blessed to be able to work from home and the slower pace of life has been very refreshing. More time to write! Not a lot of pressure either which is essential. Because we live in different cities anyhow, Nick and I are used to ping ponging tracks to each other online.

TCI: Do you have any plans for your next tour? If yes, what are you looking forward to most?

EF: YES WE HAVE PLANS. We just want to tour again! It’s been too long! We miss our fans and playing and sweaty dancing. There’s nothing like it. We will be back out there the second it has been deemed okay! Sharing Airbnb’s with the guys is always a fun time. Sometimes Nick brings his playstation.

TCI: What are some of your goals for the rest of the year?

EF: Honestly, we want to release another track or twelve, and tour!

TCI: Will we be lucky enough to hear a new album from you guys in 2020?

EF: An album? Wowee. What a dream. Maybe one day! We do have like 50 songs/half songs sitting in the bank. I think we could make an album. We might need to write another 50 more to be sure they are the most elite of them all. Thanks for asking, that’s really kind. I have a dream to call our album “Schmeaps Schmood Schmiends”… no one seems to like the name as much as me though.

TCI: Your sound is so unique, I would love to know who you’re inspired by sound-wise and lyric-wise?

EF: It all began on Nick’s Korg Poly 800. A synth originally released in 1983. It was the inspiration for our first HGF track ever written and has continued to be the bedrock for most of our songs! (Since then he has wrapped his arms around a Roland Juno 6.) Nick’s brain is one of a kind. I literally love everything he writes. I’m in a band with my favourite songwriter. It’s the best!

Lyric-wise. I like to record nice / fun things my friends say in passing conversation, on the notes app on my phone. Usually that will make it into the song! – if not that, a version of it. I also enjoy specific lyrics that paint a picture / tell a story. It’s always a good time when we are laughing while we are recording the vocals.

TCI: Do you have any advice for musicians and how they can succeed during this time?

EF: Well, I can only speak from my own experience. I think I get better at songwriting, the more songs I write and the more people I write with. If people are wanting to dive head first, in the deep end, fully clothed into the songwriting realm! Maybe try and write something a day? Whether that be a melody or a set of lyrics or a chorus. And reach out to others to write with them! We need community in this time, it can be easy to forget.

You can keep up to date with Heaps Good Friends over at their Facebook page and check out their tunes at Triple J Unearthed.

5 Brands to Support During COVID-19