“21 bands, 10 DJs, 30 visual artists, no clashes – best weekend ever? Maroochy Music and Arts Festival was in spectacular form this year, with creativity, good vibes and cosmic energy to spare.

Music and art often communicate expressions that are difficult for words to describe. Enjoying live music provides an opportunity to take a break from normalcy, which is why having an entire day dedicated to music allowed this yearâ€™s Maroochy Music and Visual Arts Festival visitors to embrace and relax in the wonders of lifeâ€™s sights and sounds.

Heavy clouds were ominously looming over the fresh greenery of the transformed Horton Park Golf Club, as excited music lovers entered the grounds, prepared with their ponchos and festival-proof footwear, trudging through mud and thick grass towards a location where a heavy shower could simply be transformed into a unifying rain dance with strangers. Possibilities were endless. 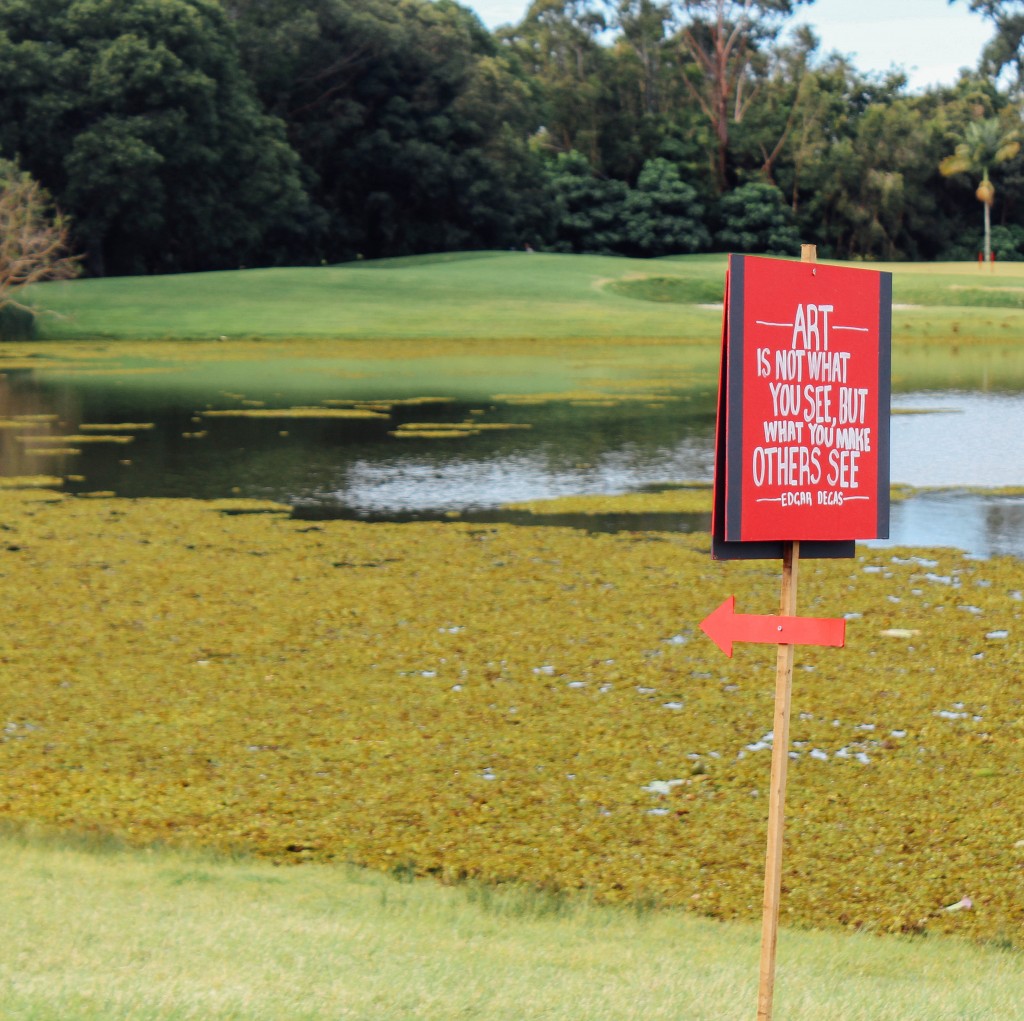 Edgar Degasâ€™ undying words prepared the imagination to expand itself, as the first thing that greeted guests were five magnificent white inflated bunnies created by Amanda Parer, a Sydney artist whose work has been showcased all over the world. They were bouncing with the rhythm of the breeze, inviting its guests to join them in wonderland.

21 bands, 10 DJs, 30 visual artists, no clashes, food stalls showcasing worldwide cuisine, and individuals from all over dressed in an assortment of hats and frilly apparel, with hairstyles that made those with short hair seem like a numbered minority. The atmosphere was relaxed and accommodating, as MMVAF brought together individuals who had come to take a break from the tempo of everyday life and to be welcomed to a setting with a more laidback groove. 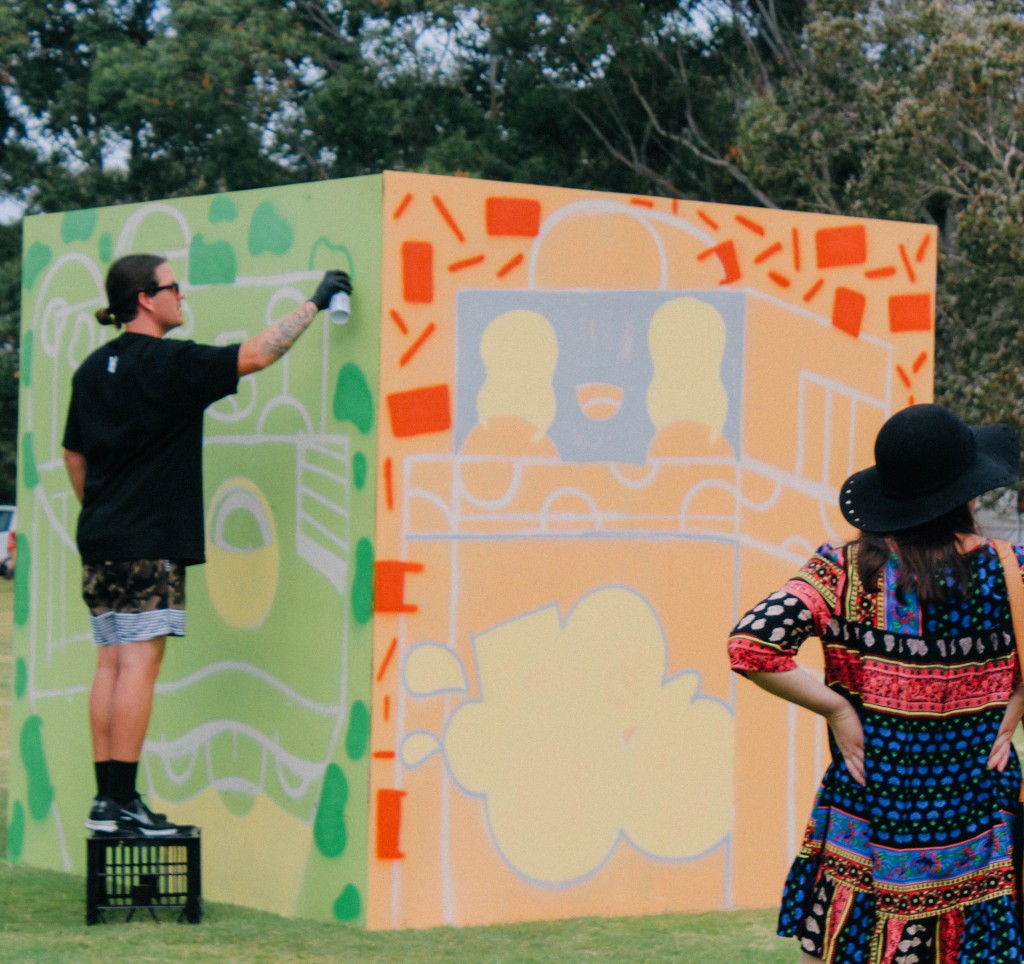 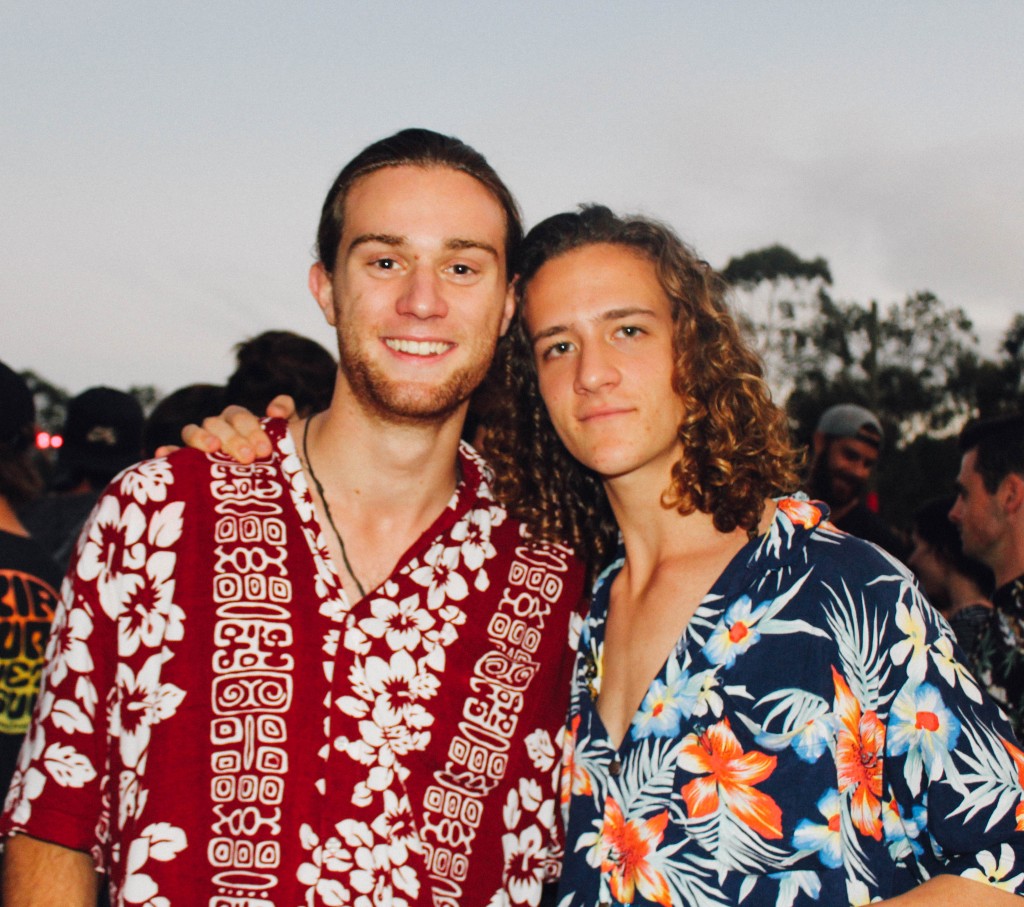 Melbourne band Hiatus Kaiyote exuded the rich jazz-funk-soul sounds of their diverse culmination of genre defying grooves. Vocalist Nai Palm sported incredibly lavish gold hoops and wooed the crowd with her smooth and soulful vocals, while the quartet evoked previously non-existing dance moves that could properly accompany their Grammy-nominated single â€˜Nakamarraâ€™, a song that is linked to the Australian Aboriginal artist Doreen Reid Nakamarra and describes the beauty that comes from loving each other through community and art, which poetically described the exact connections that were being made through every swing, twirl and sway in the crowd. 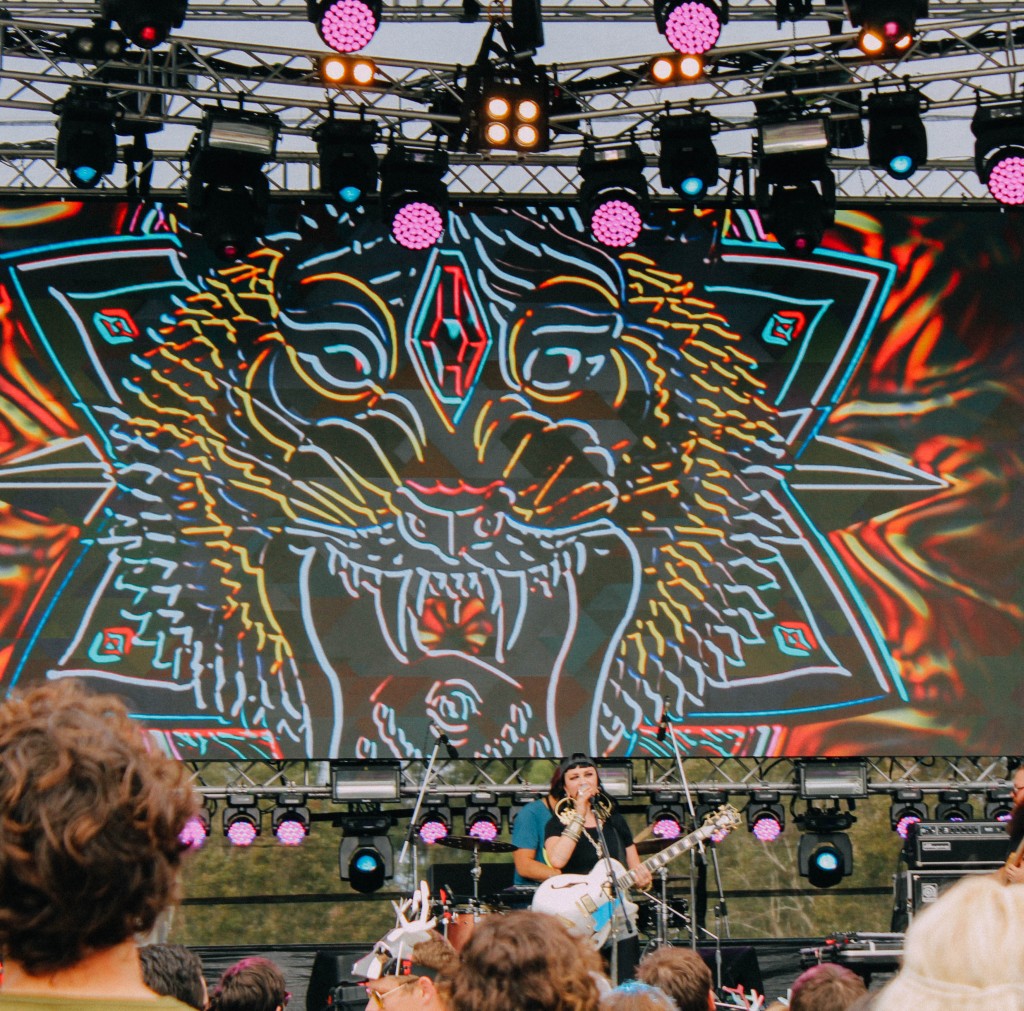 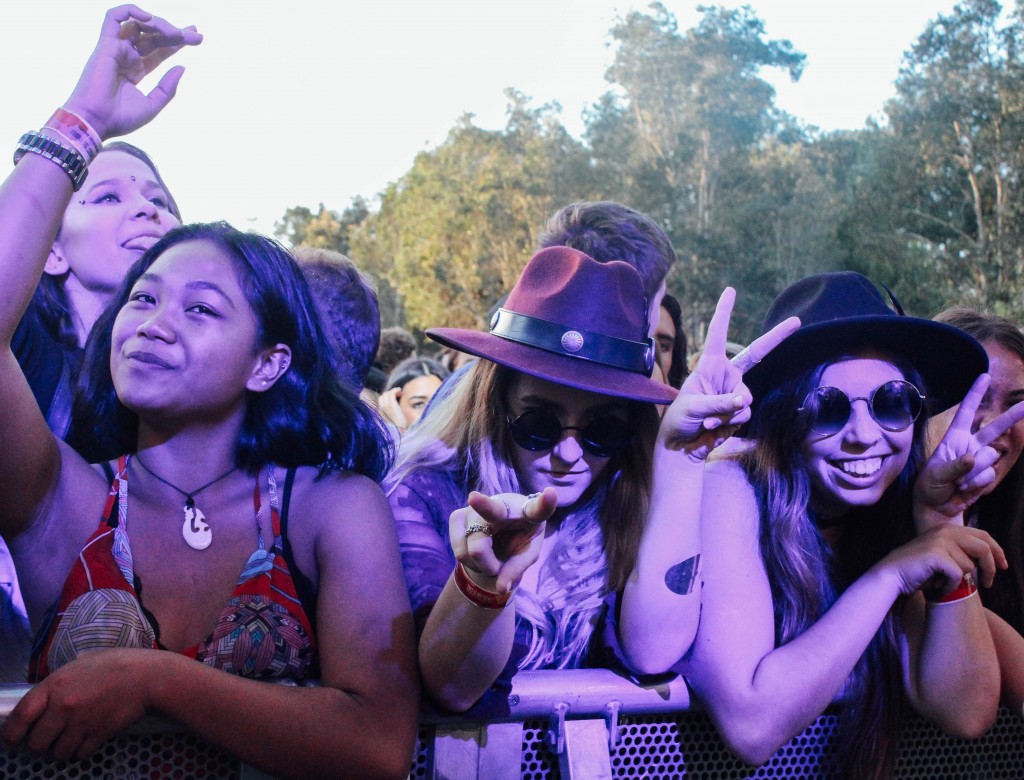 Intervals between each act were one of the best parts of the festival. Unlike many music festivals, MMVAF made sure to spread out its musical acts and only have a singular stage, to ensure guests had plenty of time to explore their meticulously curated surroundings. MMVAF set up an environment where enjoying the intervals was just as important as the musical acts. The visual artists were busy at work, creating live displays of the process of their art making, using huge graffiti cubes as their canvases. The mediums were larger than the artists and gave them creative space to become part of the art; flicking colours, spraying paint, and creating live imagery that was appearing right before the audienceâ€™s eyes. 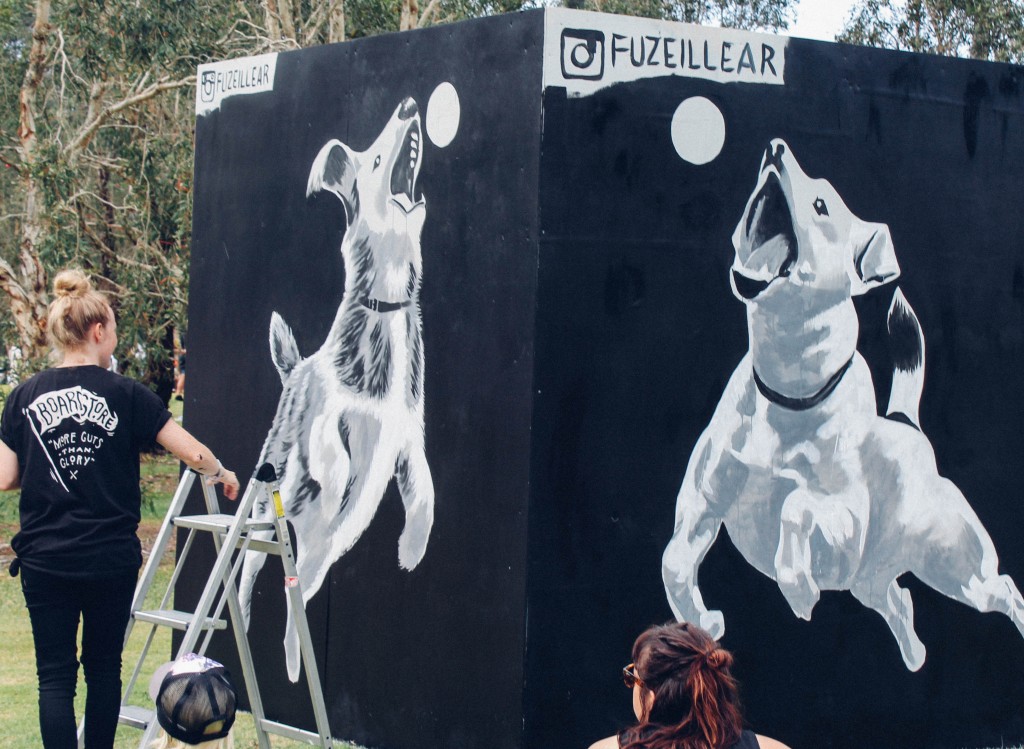 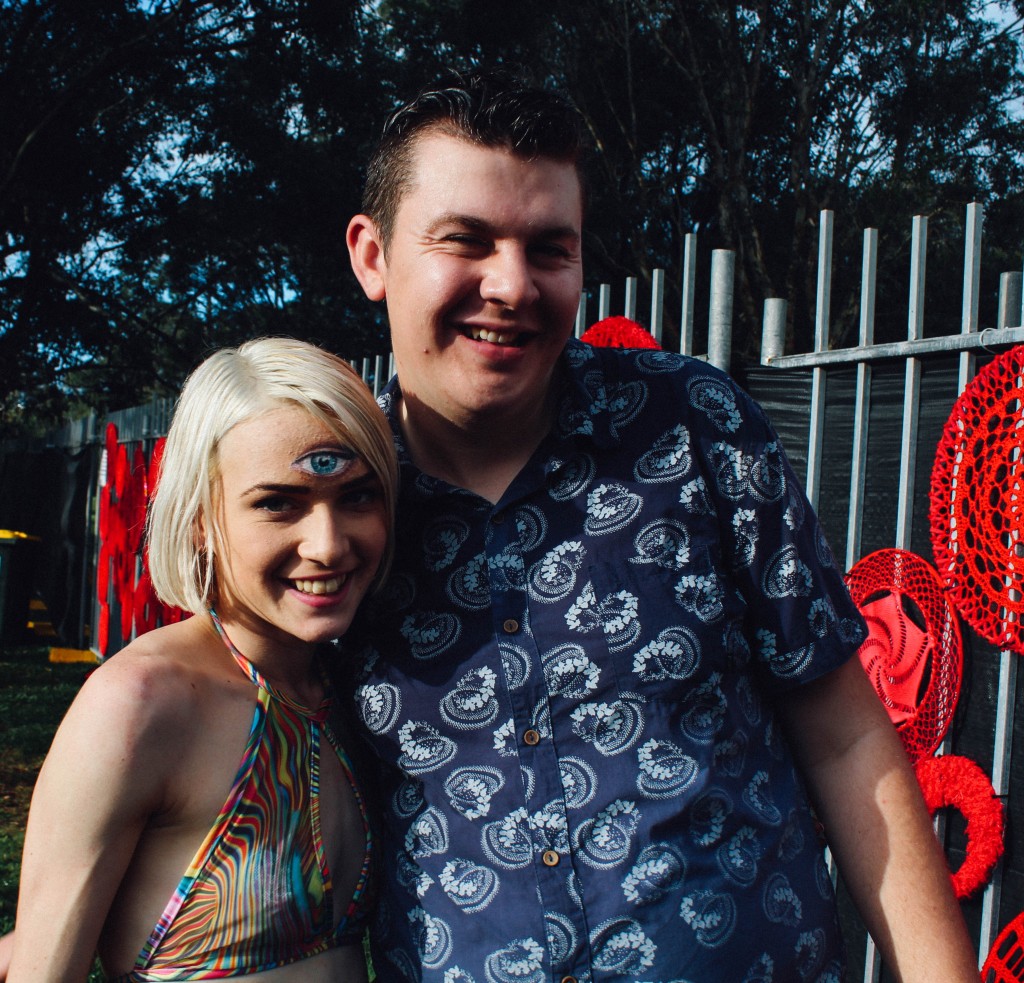 Each detail of the festival set-up allowed guests to wander the grounds and collect their own experiences and stories. The owner of the Mango Shack told stories of his experiences in teaching trust exercises in acrobatics and even provided demonstrations. A booth provided the technology to engage in a dance-off with a feisty hand-drawn animation of a twerking female dancer. Kanye West mash-ups were being blasted from the only other stage at the venue, a small hut that considerately sported a couch for tired dancers to rest their wary feet.

Alpine brought their unique flavour to the scene, providing pop-heavy and dance-friendly beats that were charismatic, complex and easy to get lost in. Lead singers Phoebe Baker and Lou James both brought their own individual and enigmatic energies to the stage, creating perhaps the most memorable stage presence of the day, each dancing with their own intensity but coming together to create complimentary vocals oozing with unforgettable feminine power and raw energy. 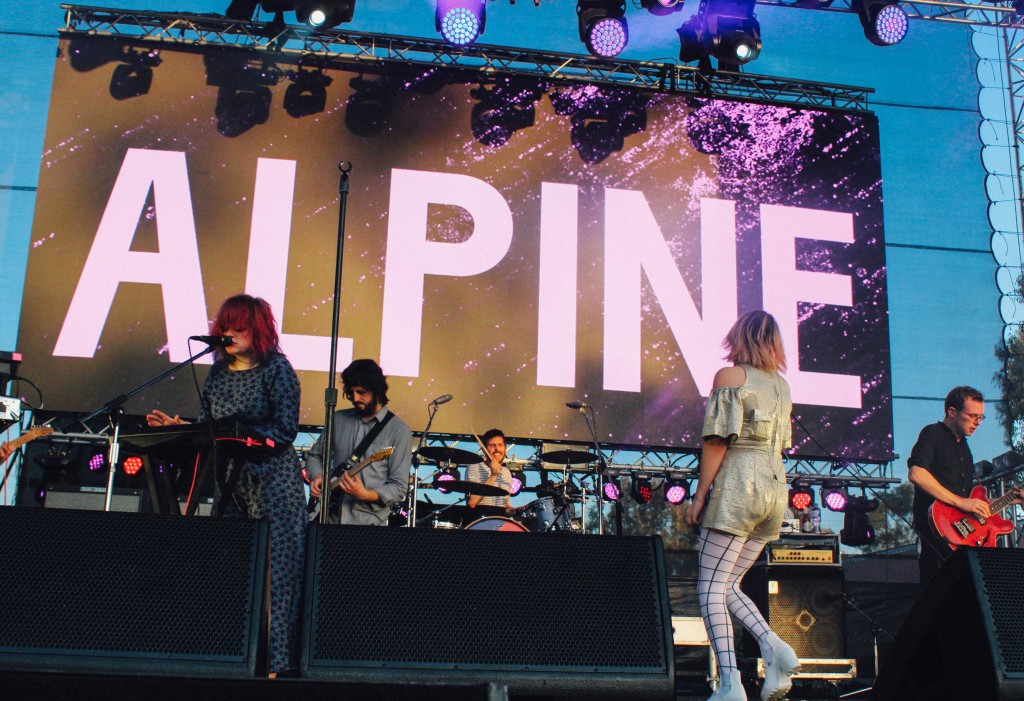 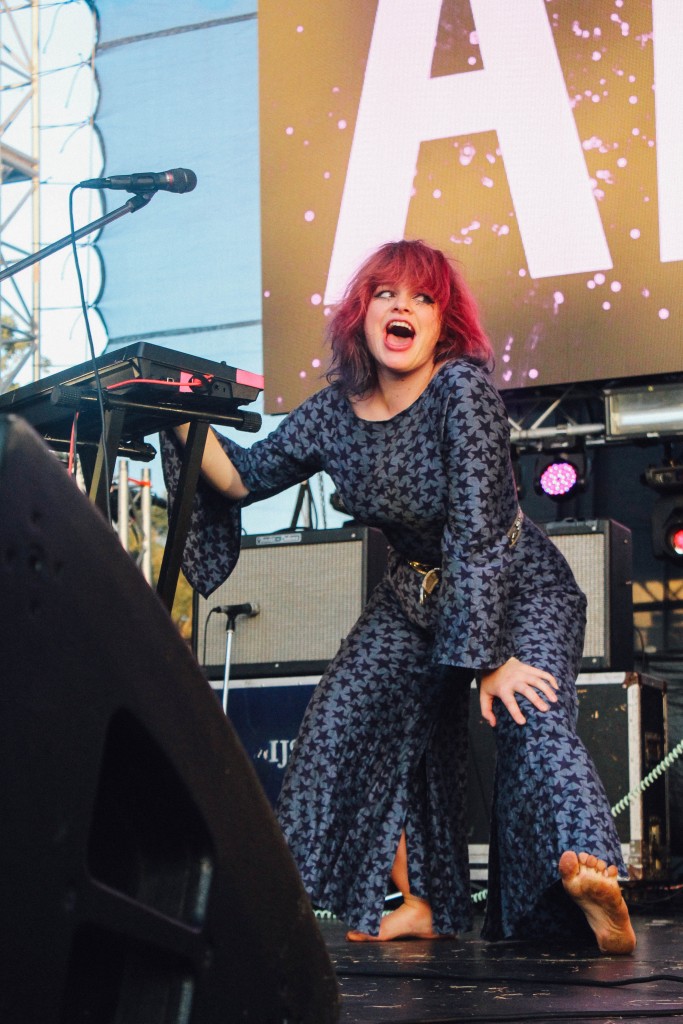 Lou Baker showing off her dance moves with her bare feet

Rockers DZ Deathrays were a crowd favourite, as their performance seemed to challenge its audience. It seemed to dare the crowd to feel their music to the fullest extent, which proved to be successful. There was plenty of hair within the crowd to whip around during the particularly head-banging numbers, and as the lights were fading from orange to red, the Sun set over the stage and created a halo of red fiery passion that clearly burned through the spirit of the set. 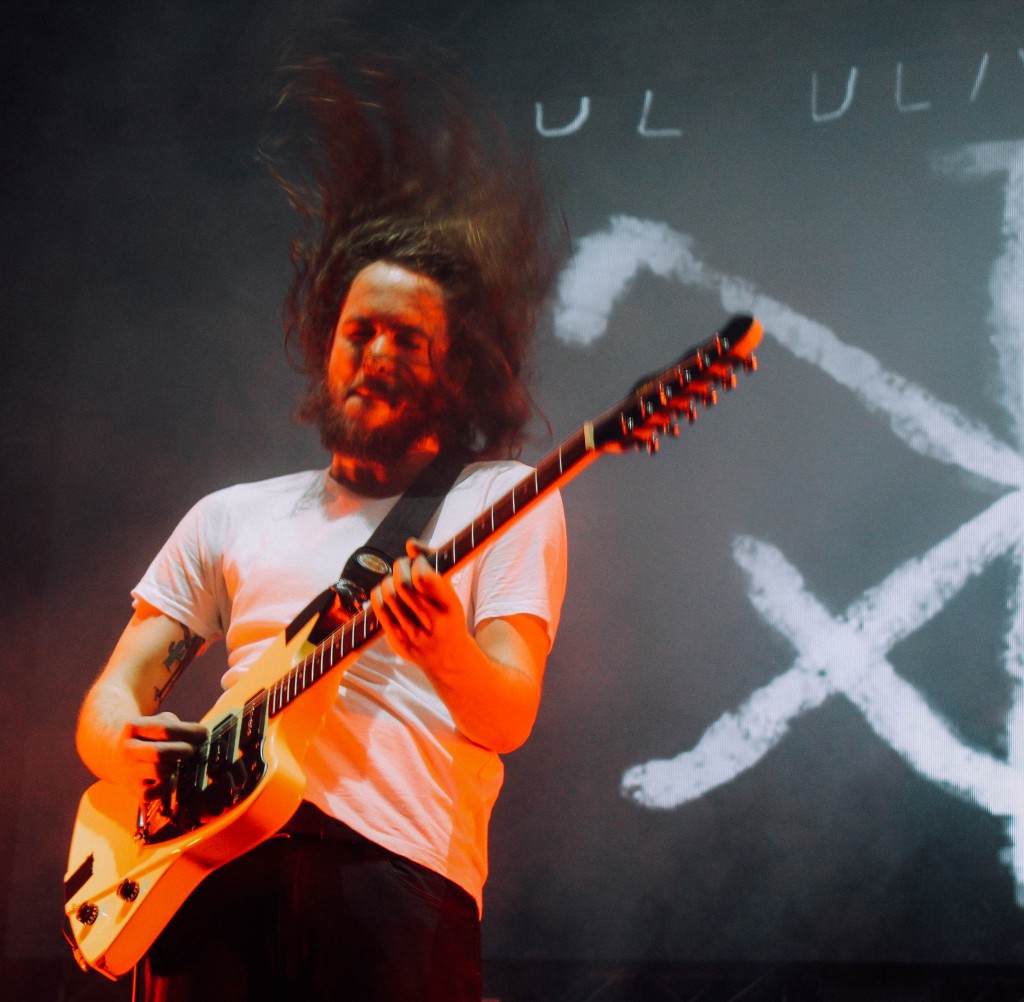 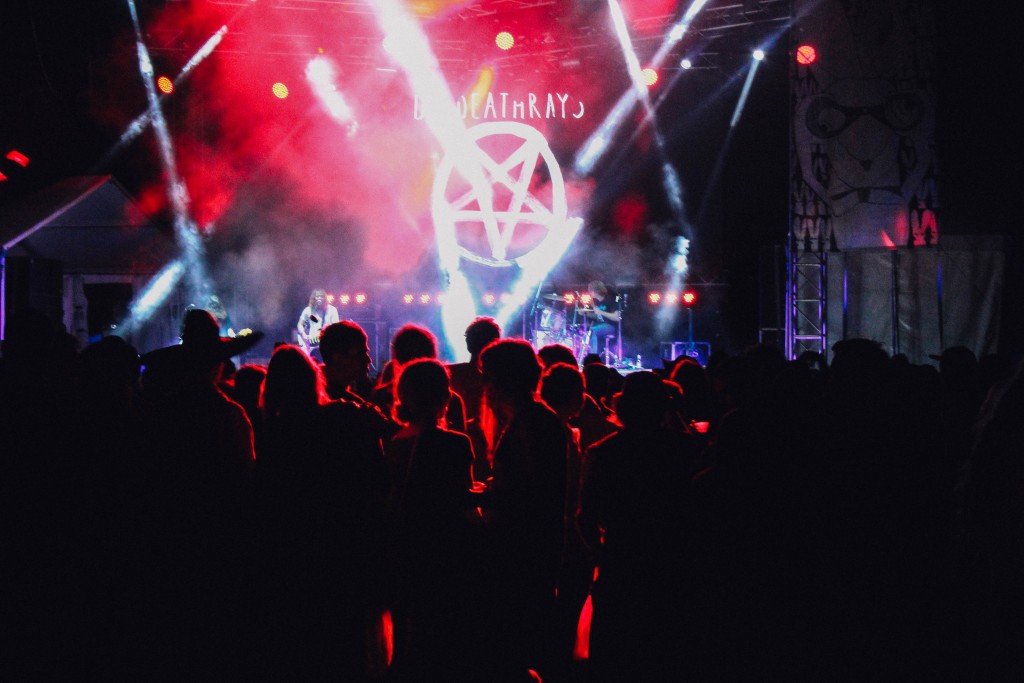 DZ Deathrays ushers in the sunset

The night began to mellow, as The Kite String Tangle soothed its audience with flows that were cosmic and clear, accompanying the night sky as it fell dark like a blanket over the sea of musical euphoria. The visuals stunned the crowd; the music closed the eyes of many and instead opened something from deeper within. 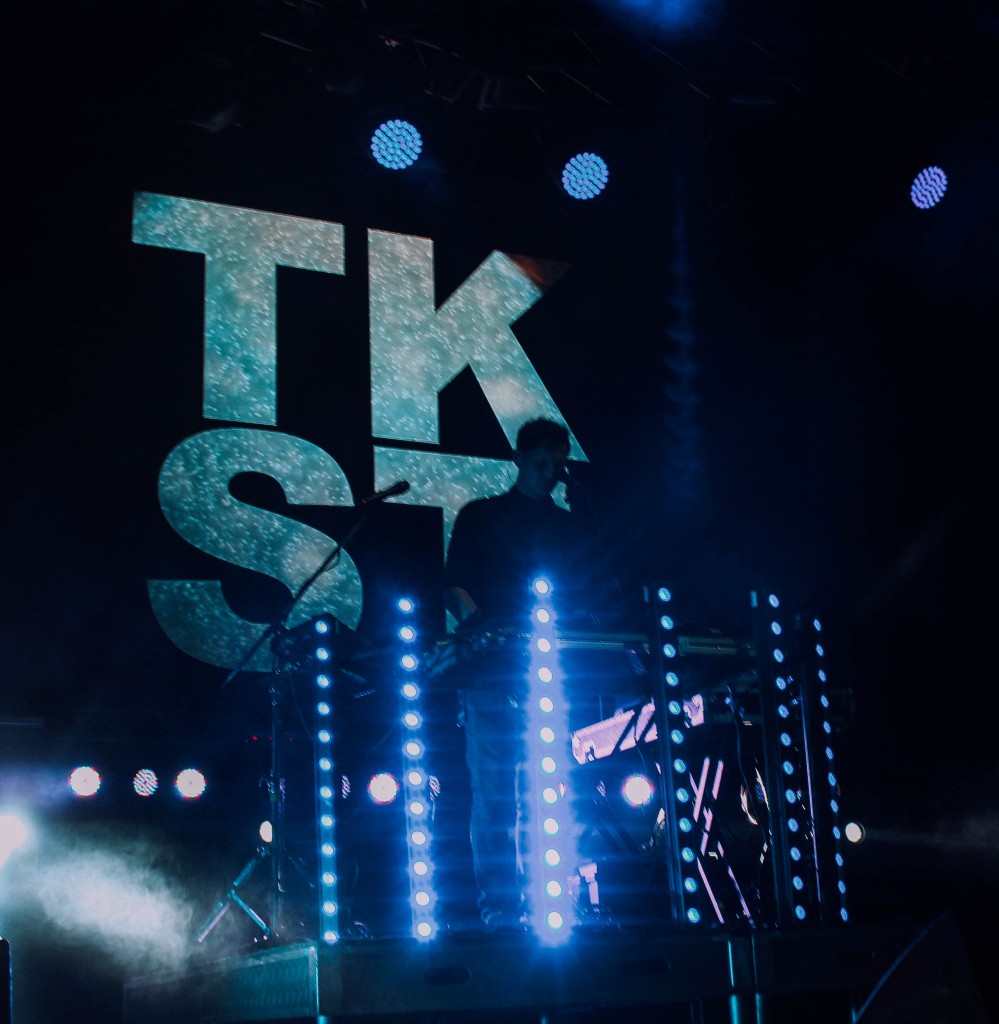 The Kite String Triangle at his DJ Station

Flight Facilities brought the crowd to the peak of the festival, as the globetrotting artists greeted the ecstatic crowd sporting their iconic aviation headgear, landing right in front of thousands of fans who were ready to lose themselves to the infectious sounds of worldwide hits such as â€˜Sunshineâ€™ and â€˜Crave Youâ€™, as they brought out the vocal talents of musical guests and brought the crowd together with the universal emotions of wanting, needing, loving with such passion that you just had to dance to it. 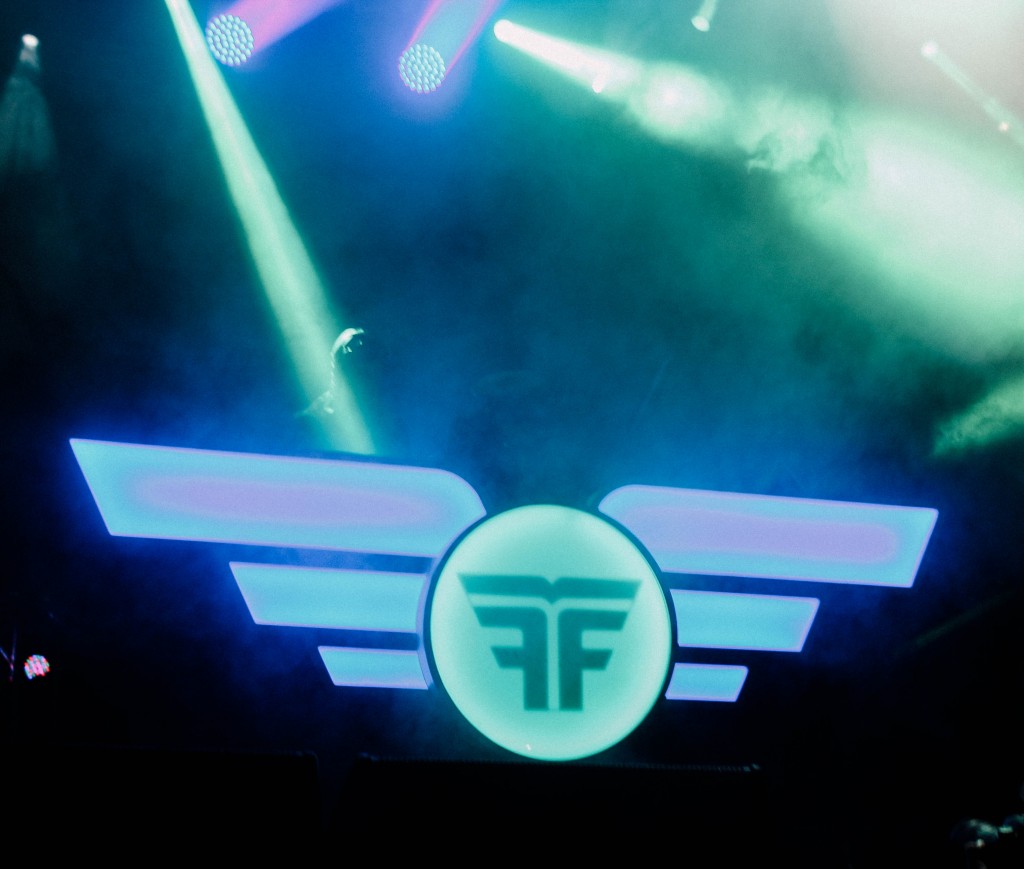 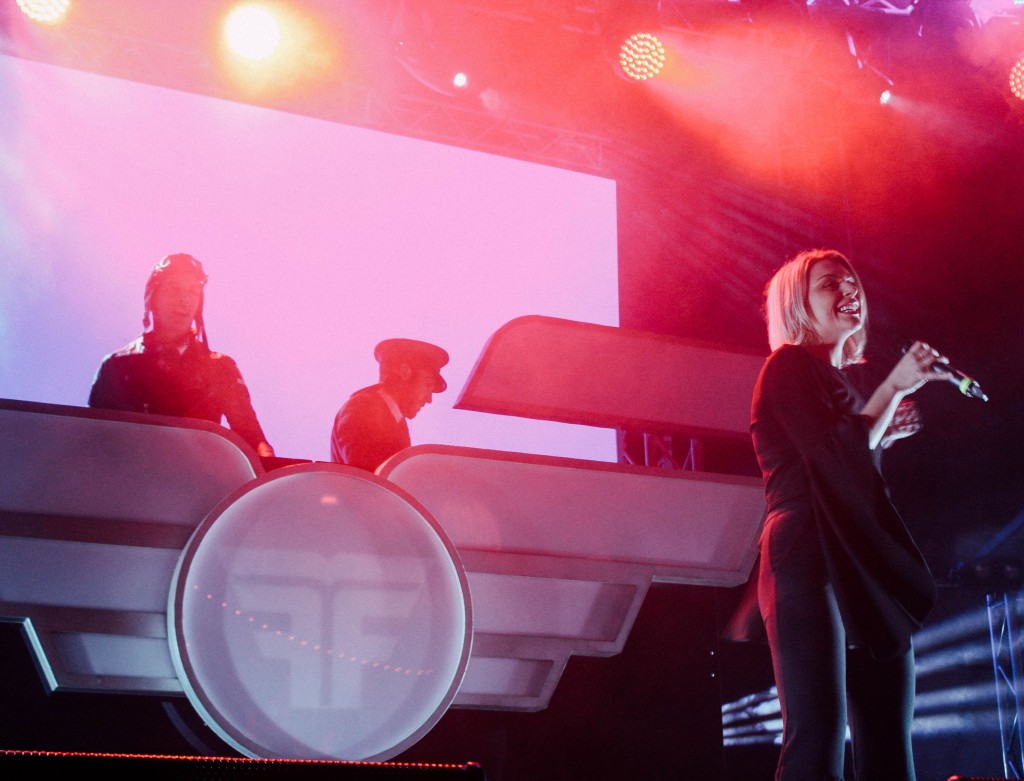 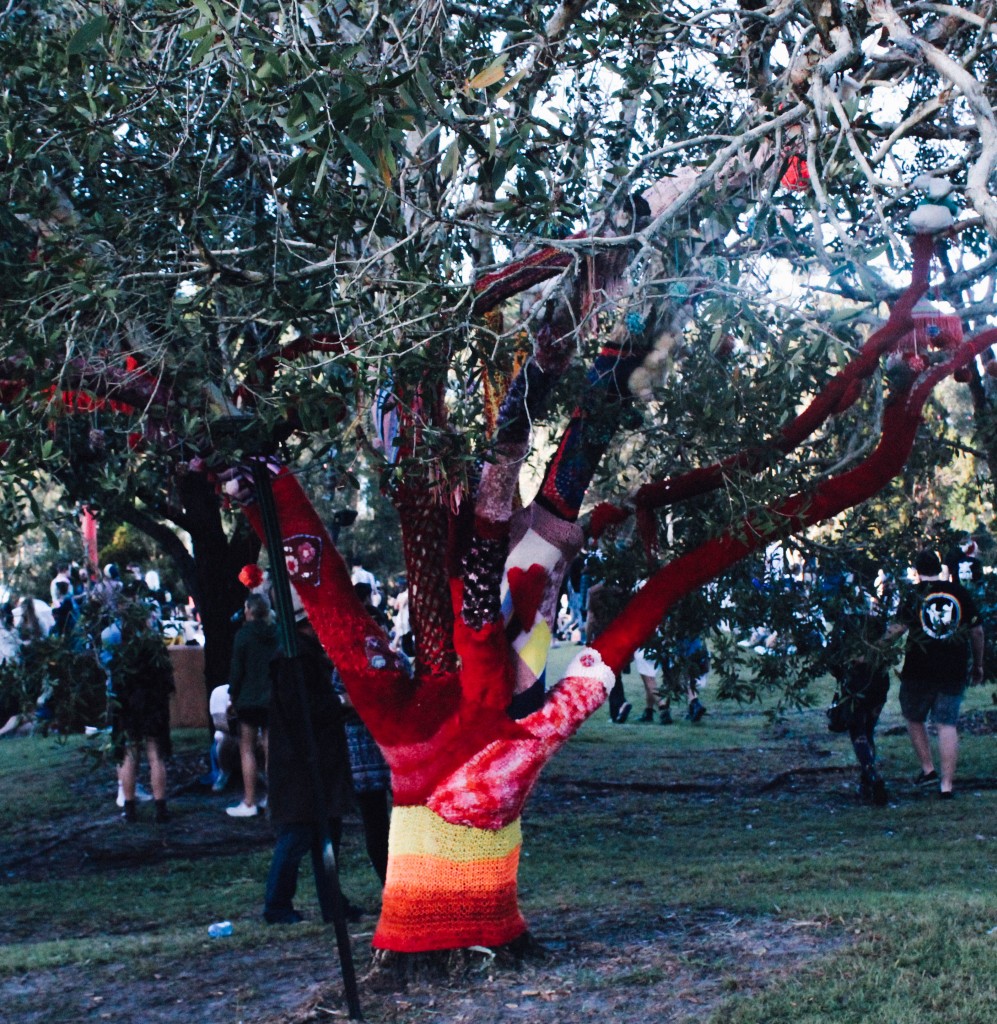 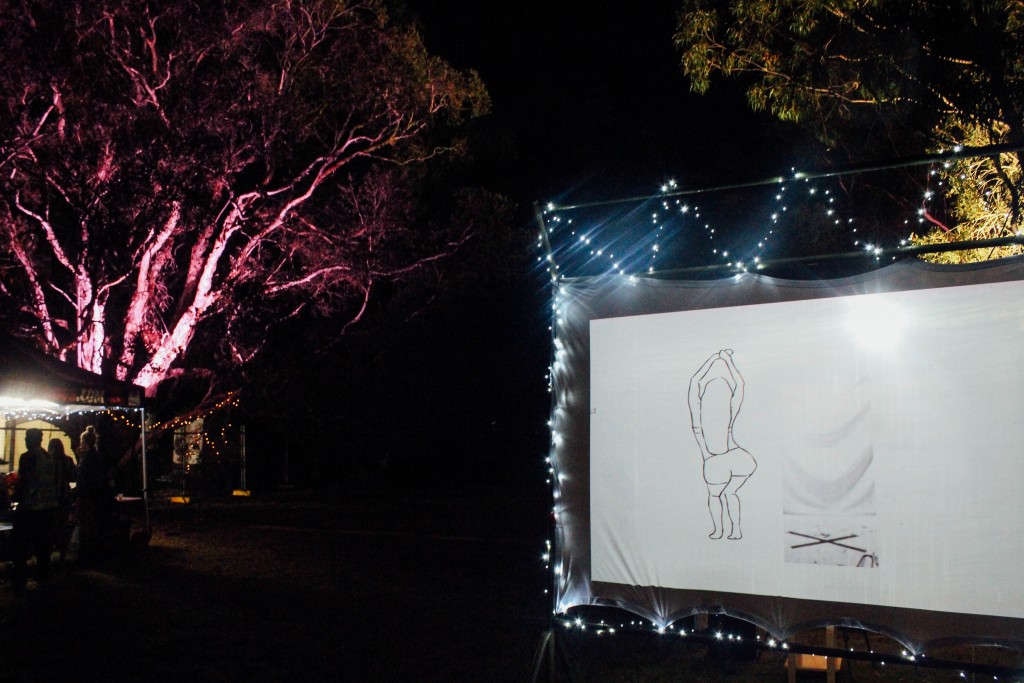 There was a mutual respect for the sight of illuminated white bunnies that seemed like the symbolism of dreams, of trees being hugged by romantic crocheted clothing, of sofas sprawled across lawns and of partaking in the intimate process of hoisting a complete stranger onto your shoulders â€“ it all made sense to be at the MMVAF. 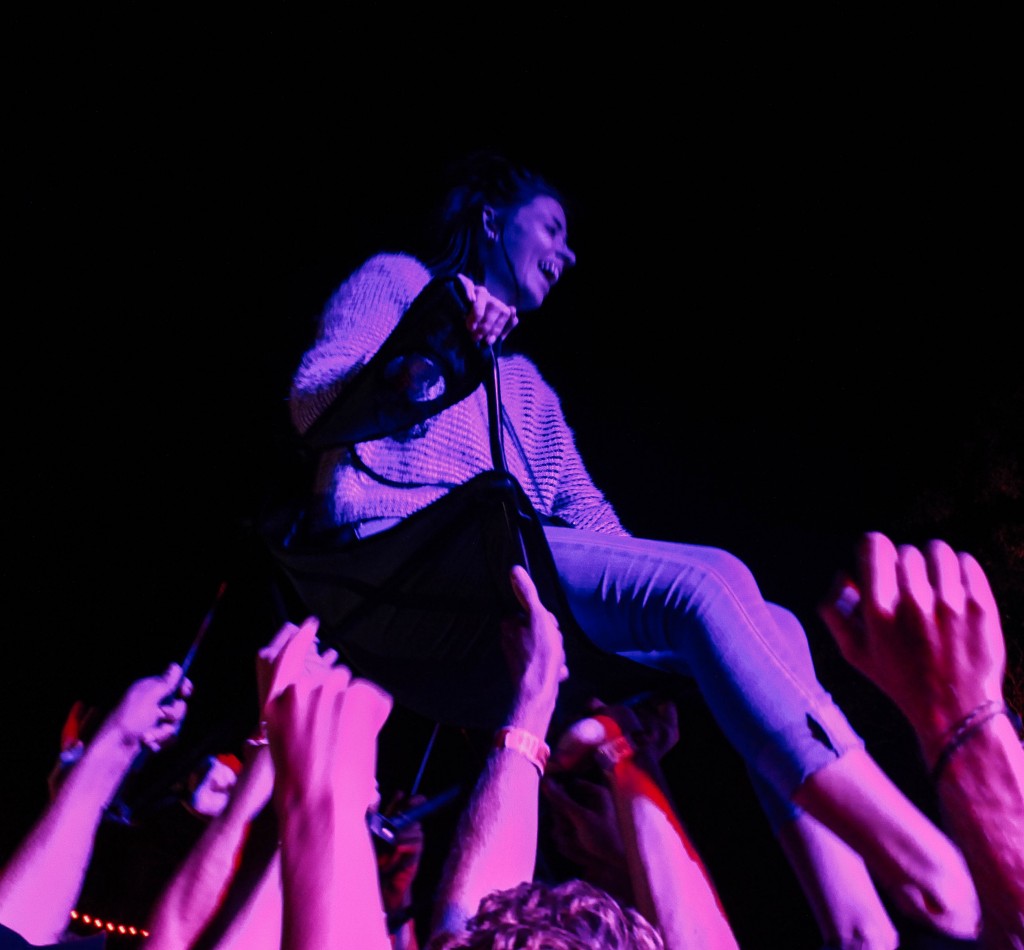 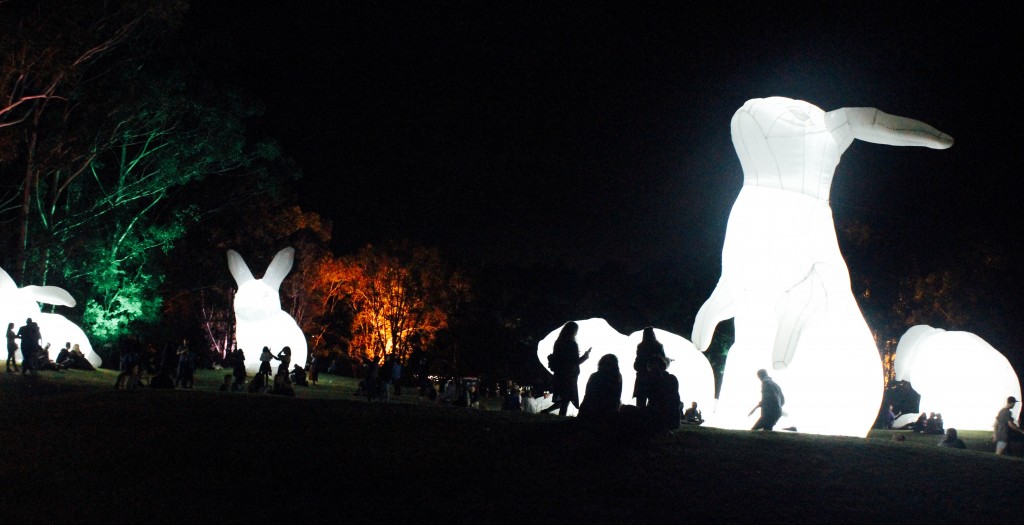 As the day came to a close, it was stirring to observe that the Maroochy Music and Visual Arts festival had melted social boundaries and allowed people to bond over the mutual love and respect of music and arts, simply because they could and wanted to.

It is these experiences where the abstract beauty of lifeâ€™s diverse sights and sounds are encouraged and welcomed. These things are simply not a part of every day life, which is why the Maroochy Music and Visual Arts Festival 2015 will be a day remembered by many. 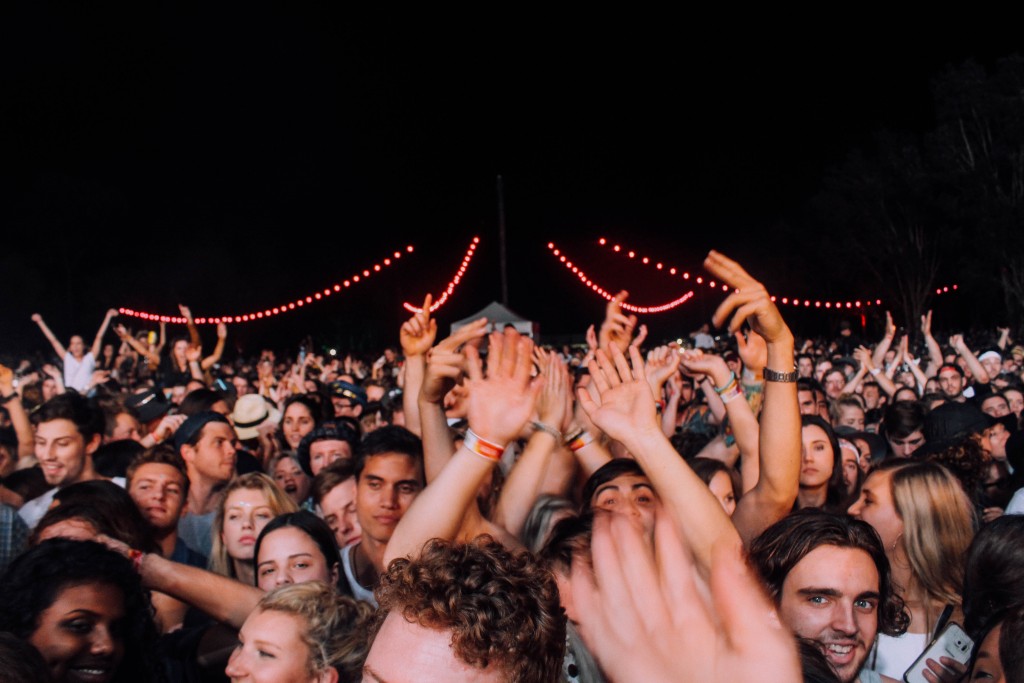