One year ago, two people in America made a video. Armed with bananas, cash and clothing they set out to make a few of the homeless on their streets smile. Fast-forward to 2014 and a small community in Brisbane, Australia are banding together for the same reason.

On Wednesday the 28th, a group of Australian musicians will gather at the RNA Showgrounds to play to a thousand-strong crowd in the hope of making the homeless smile.
The project comes as part of the community-based event, Homeless Connect. Services at the event include free legal advice, medical care, accommodation referral and clothing. At midday, the group will take to the stage and debut their song, Hold On, written and recorded to inspire a simple smile on the faces of thousands.

Originating from humble beginnings, Project Manager, Tanya Miles-Houia noticed the movement was yet to take ground in Australia. Pulling together a group of local musicians, web designers, video producers and service workers, this community of socially conscious humans have taken hold of the idea and run with it. 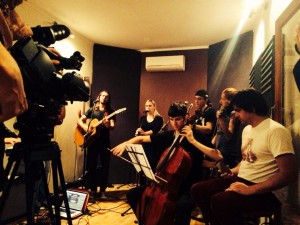 Fronted by three residents of The Green Bar in Coorparoo, Phil Barlow, Donnelle Brooks and Nic Tango form the voices behind the tune. Taking to the stage with them on Wednesday is James Goddard on keys, Michael Clarke on drums and Tim Leayr on bass.

The song, Hold On, is a unique track boasting a moving introduction, a chorus with a powerful meaning and a cheeky rap thrown in for good measure. Played with the same passion with which it was written, the song is one of five to be played to the crowd at the Showgrounds.

â€œWe hope the lyrics in Hold On help people, be they homeless or generally having a bad time, turn feelings of helplessness and despair into those of hope and inner strength,â€ Barlow says.

â€œAbove all we hope it makes you smile, if only for a few minutes.â€

The Brisbane performance however, is only one part of the endeavour. Joining forces with major partners, Surge Media, VMP Production, Joining Hands and Kitty Kitty Bang Bang, Wednesday is only the beginning.

Make The Homeless Smile doesnâ€™t end with the live performance at Homeless Connect. The fast-growing group plan on piling into a bus and heading out of a road trip to spread the love further and make a video of their travels for the rest of the world to see.

â€œThe project has been really organicâ€¦ Music is so powerful, it deeply affects me and this song, ‘Hold On’ gives such a strong message to anyone having a hard time, I look forward to seeing it make people smile,â€ Cobb says.

A recording of Hold On will be released on iTunes after the event with proceeds going to Joining Hands, providing free health services to homeless youth.

Laneway Learning: Classes for Anything and Everything!

Fashion from the Cannes Film Festival