Take a seat and think back, reminiscence of all the memories that make a house a home, your home.

Performed in Queensland Performing Arts Centre’s Playhouse theatre as part of Brisbane Festival 2018, HOME is a stunning blend of choreography, performance, and illusion. Through this combination, HOME is a live documentary of the significant and insignificant moments that transform the walls of a house into the loving embrace of a home.

The performance begins with the work’s creator, Geoff Sobelle, walking across the front of the stage, setting up a pair of construction site lights directed toward the audience, while the theatre’s house lights still glare above our heads. And the audience, without the dim of the house lights to clue them, lingered a moment longer in conversation before realising the audience began. This moment of watching a man on a blank stage, who looked to have just walked out of the audience, while the audience slowly come to realise the performance had begun, was an incredibly humble opening to a fascinatingly humble production.

Sobelle’s HOME is a masterful work of construction, as a bare stage becomes an entire house in a matter of minutes, and a home in the duration of the performance. Through choreography and illusion, cast members step out of vacant showers, emerge from a seemingly empty bed, and back out of a refrigerator, four at a time with lemons in hand. 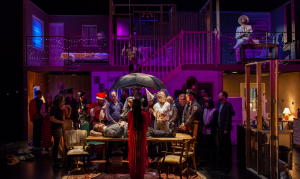 Audience interaction is not an easy feat to achieve, considering our tendency as audience members to resist the spotlight, but the cast of HOME soon included a large number of audience members. After the performance, I had a chance to speak with two of the audience who joined the cast on stage and both attested to the clear, direct instructions whispered to them by the cast. Confidently directed on stage, the audience members soon melded seamlessly into the performance, a testimony to the performers’ competence and the way a nourishing home can bring friends, families, and strangers close together in shared experiences and memories.

HOME is a fantastic and touching production. I entered the theatre uncertain of what to expect, but I left the theatre smiling, with memories of home, my home, on my mind.

David Baddiel – My Family: Not the Sitcom

Queensland Theatre 2019 – A Season of Dreamers