Prince William and Duchess Kate have just wrapped up their Australian tour, and while a lot of focus was on cutie patootie baby George, Kate’s fashion choices were also under the microscope.

So why not have a look at what she wore and how to replicate her gorgeous style? 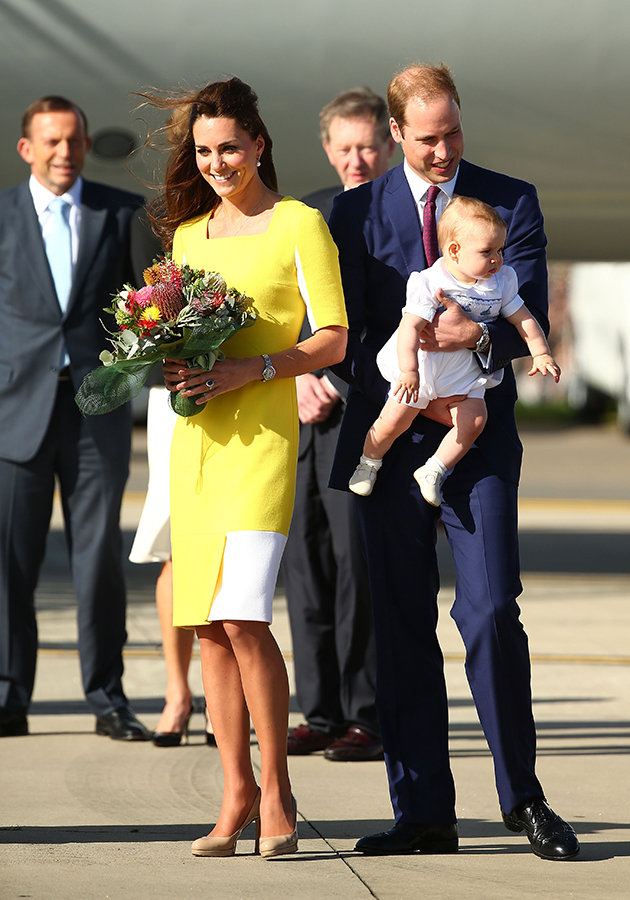 Kate stuns in yellow on the first day in Australia

Kate arrived in Australia wearing a Roksanda Ilincic Ryedale Wool Crepe Dress in bright yellow. Kate’s frocks are famous for selling out as soon as she’s seen in them, so if this one is out of your price range or no longer available, have a look at the Cue Contrast Zip Detail Dress for a very similar shape and cut. Her shoes were these Nude Patent Leather Heels from LK Bennett. 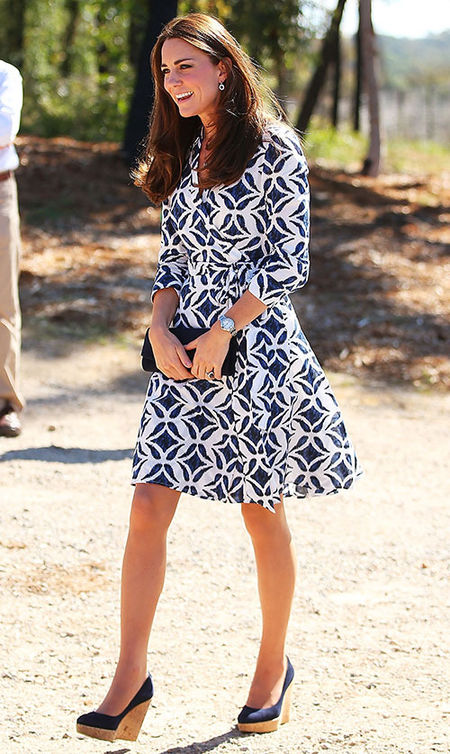 In one of her favourite designers, Diane von Furstenberg

During the Blue Mountains leg of the tour, Kate wore a Diane von Furstenberg (hot tip: one of her favourite designers)Â Patrice Wrap Dress which is sadly no longer available. However you can have a look at the Amelia Silk Combo which incorporates some of the pattern from Kate’s dress. The New Julian Two Silk Jersey is also a similar style.

The third day saw Kate sporting a white Zimmerman dress in eyelet floral lace. It is not available to view on the website, however it is called the Roamer Day Dress.Â For similar designs look at the Forever New Sylvia Lace Tulip Dress or theÂ Minkpink Lace Gathered Side Dress. Shoes were the Stuart Weitzman Minx Wedges, the same brand as her shoes from the 17th.

Kate wore the gorgeous blue and white LK Bennett Lasa Poppy Dress when landing in Brisbane. It’s another one that has sold out but it is also available in a bright orange. She was also seen with an Oroton Indigo Clutch and unidentified Alexander McQueen pumps. Alternatives for the shoes are the Sugarfree Villin Heels. 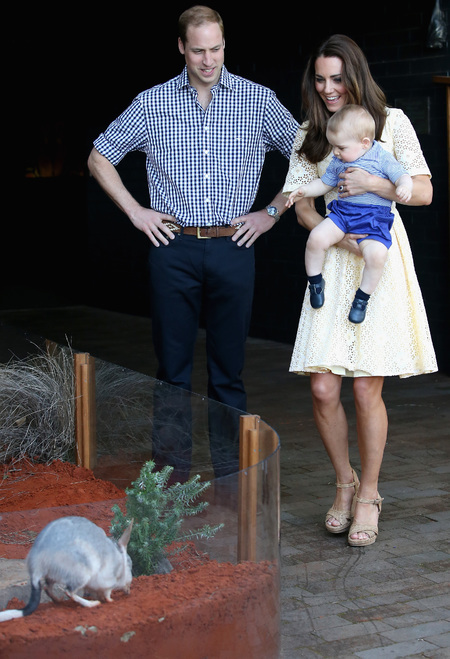 Will, Kate, and George at the zoo

Kate wore three different outfits on the 20th; a custom Alexander McQueen design, another eyelet lace dress, and the Stella McCartney Ridley Stretch Dress which is sold out. The yellow lace dress pictured above is from a dressmaker based in the Solomon Islands which is where Kate got it during her visit there. However for similar dresses try the Whistles Lace DressÂ and the Asos Skater Dress in yellow. 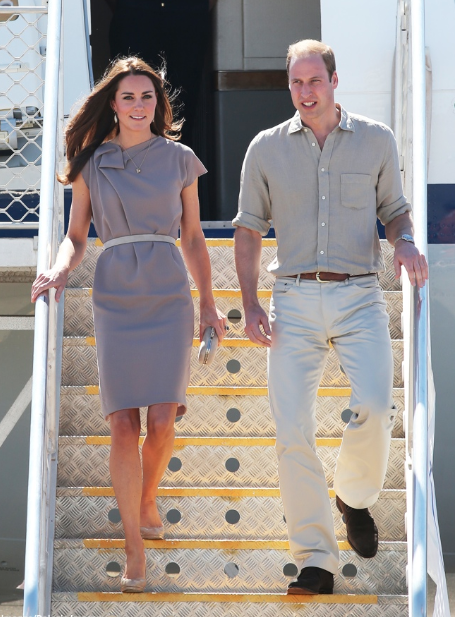 Will and Kate arriving in Uluru

Will and Kate headed to Uluru next, and Kate was seen in anotherÂ Roksanda Ilincic dress, this time theÂ Lovina design. Another sold out design! But the the Diane von Furstenberg Bentley Wrap DressÂ gives off a similar vibe, and as a bonus it is from one of her favourite designers. For a smaller budget be sure to also look at the Cue Asymmetric Peplum in grey. 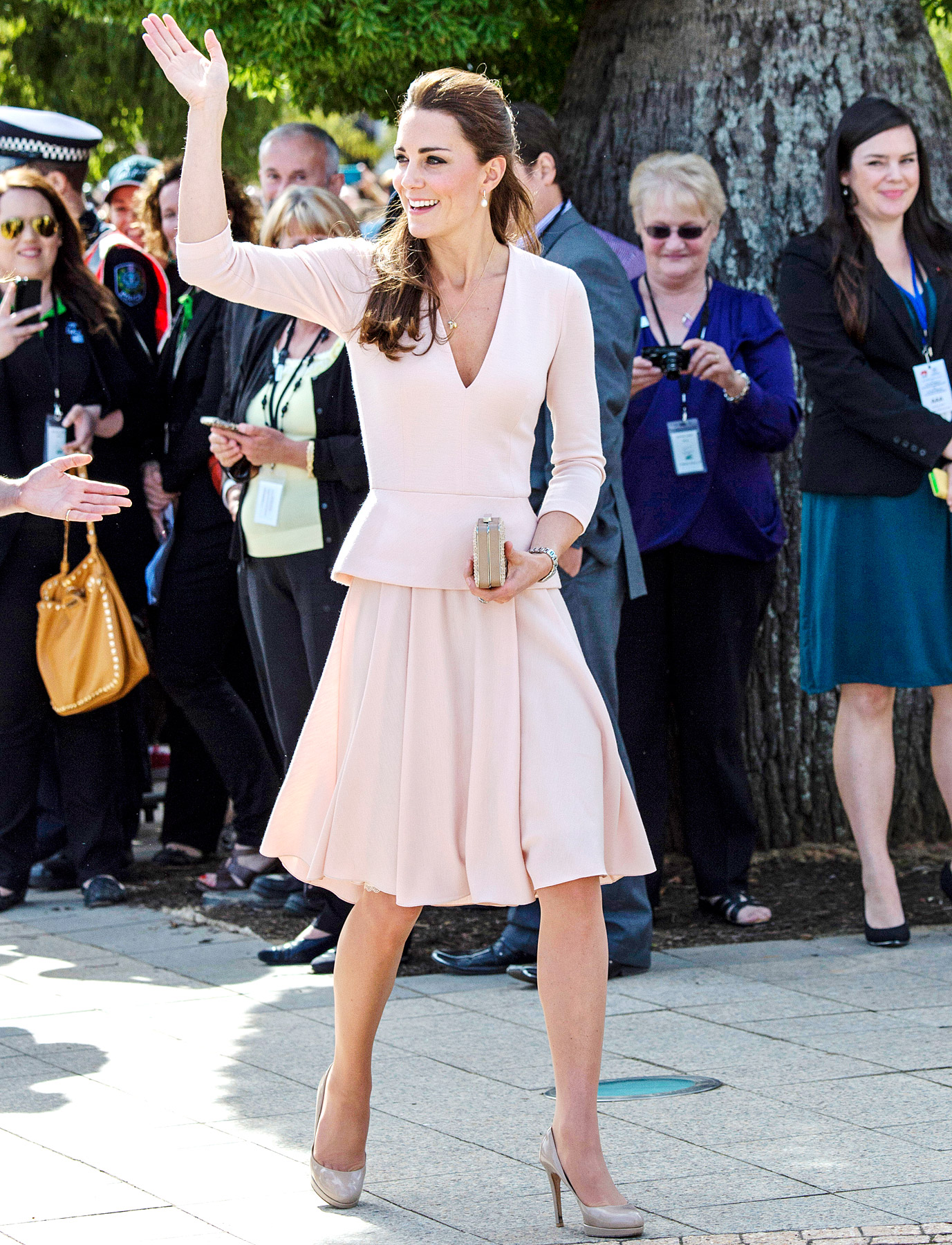 Kate wore pale pink Alexander McQueen separates in Adelaide. The top is the Pique Knit Top, and the skirt is the Box Pleat Skirt. This River Island Box Pleat Midi Skirt in soft pink is a very similar style. Try pairing it with a pale pink jacket for a Kate-esque two-piece look this winter.Â She was back in her nude pumps from LK Bennett. 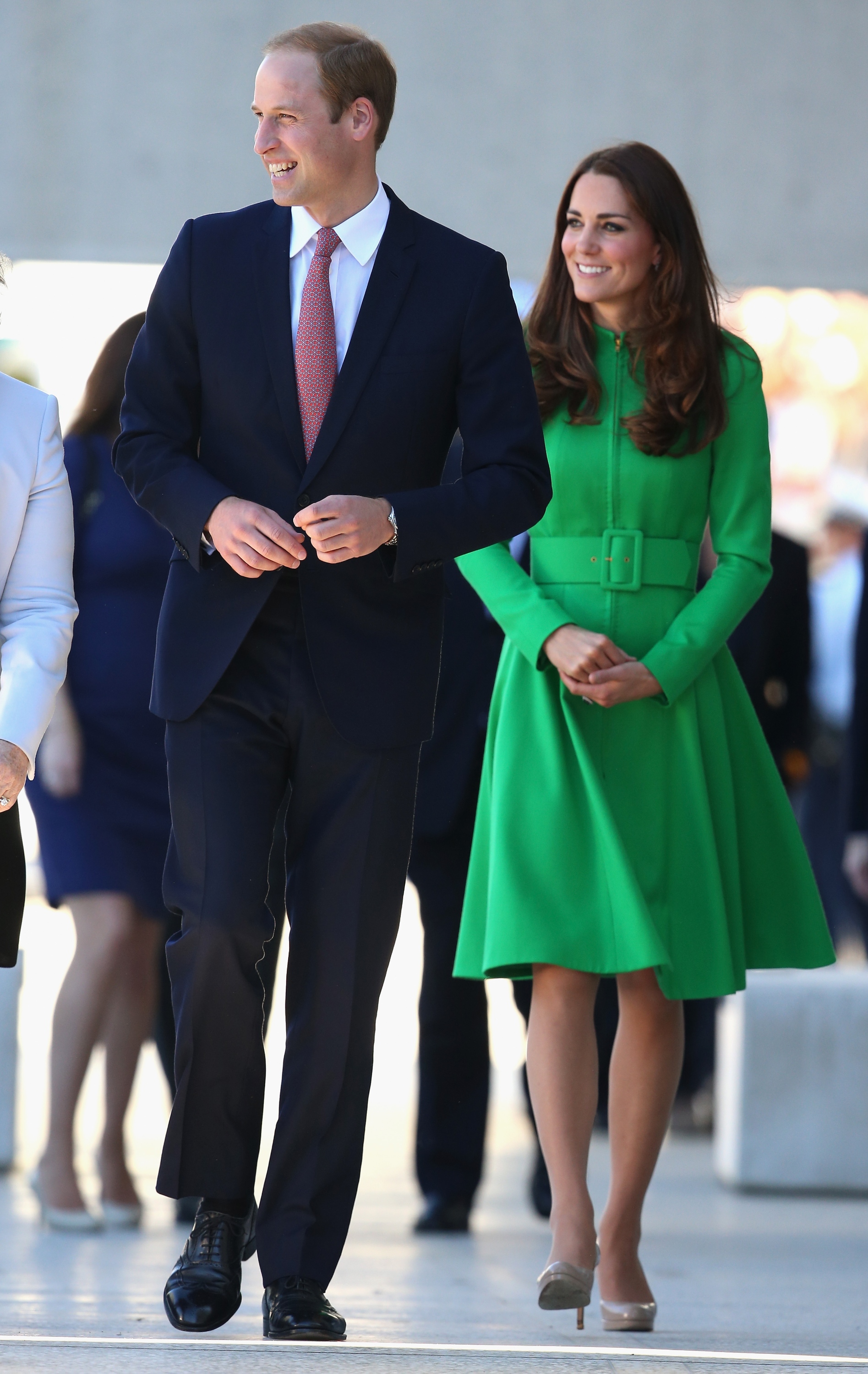 The Royal Couple walking through the capital city

Kate visited Parliament and the Portrait Gallery in bright green, a custom Catherine Walker coat dress. It combines two elements; the top of the Lara DressÂ with the bottom of the Evelyn Coat. Though the exact piece is not for sale, the Chiara Boni Cocktail DressÂ and Jolie Moi Trench Coat are similar shades and cuts.Â Kate also wore the Circle Lace Trim Dress from Lela Rose, which is no longer available online, later in the evening. 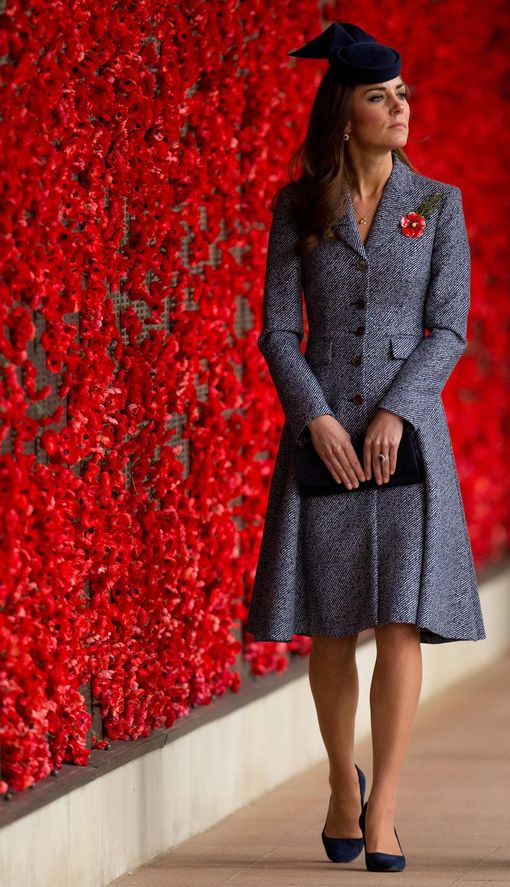 Kate after the National Service

Will and Kate attended the National ANZAC Service at the Australia War Memorial on the last day of their Australian tour. Kate was seen in a Michael Kors coat, part of the latest 2014 collection. The coat is not available online, however other options include the Each X Other Edge to Edge Wool Coat or the Koo Flap Front Trench Coat. Shoes were the same Alexander McQueen pair from the day in Brisbane.

Credit for all images in this post go to Getty Images.