We met up with Eric Abraham, the director of A Southside Love Story which won the 48 Hour Global Film Challenge in the Brisbane group, to chat about the craziness that’s involved with making a film in a single weekend.

I was lounging on a café stool in Tarragindi, enjoying the warmth of my Long Black coffee on a chilly morning, still amazed to be out somewhere again after months of isolation, when Eric Abraham came up to greet me. I looked for weariness in him, as he was only a few weeks removed from one of the busiest weekends of his life – he would later reveal that he had slept for only six of the 48 hours when filmmaking. However, his relaxed demeanour was that of someone filled with cautious optimism, as his team House of the Future had beaten the other dozen Brisbane teams in the 48 Hour Global Film Challenge, and for an aspiring filmmaker, this meant the fatigue was completely worth it.

“Initially, I never thought we would get to a point where we would be competing against Adelaide (the other Australian city who competed),” Eric said while reflecting on his team’s success. “It’s crazy that we did and it’s an awesome feeling. As an up and coming filmmaker, it’s hard to put into words even the little things that happen as you work towards where you want to see yourself.” 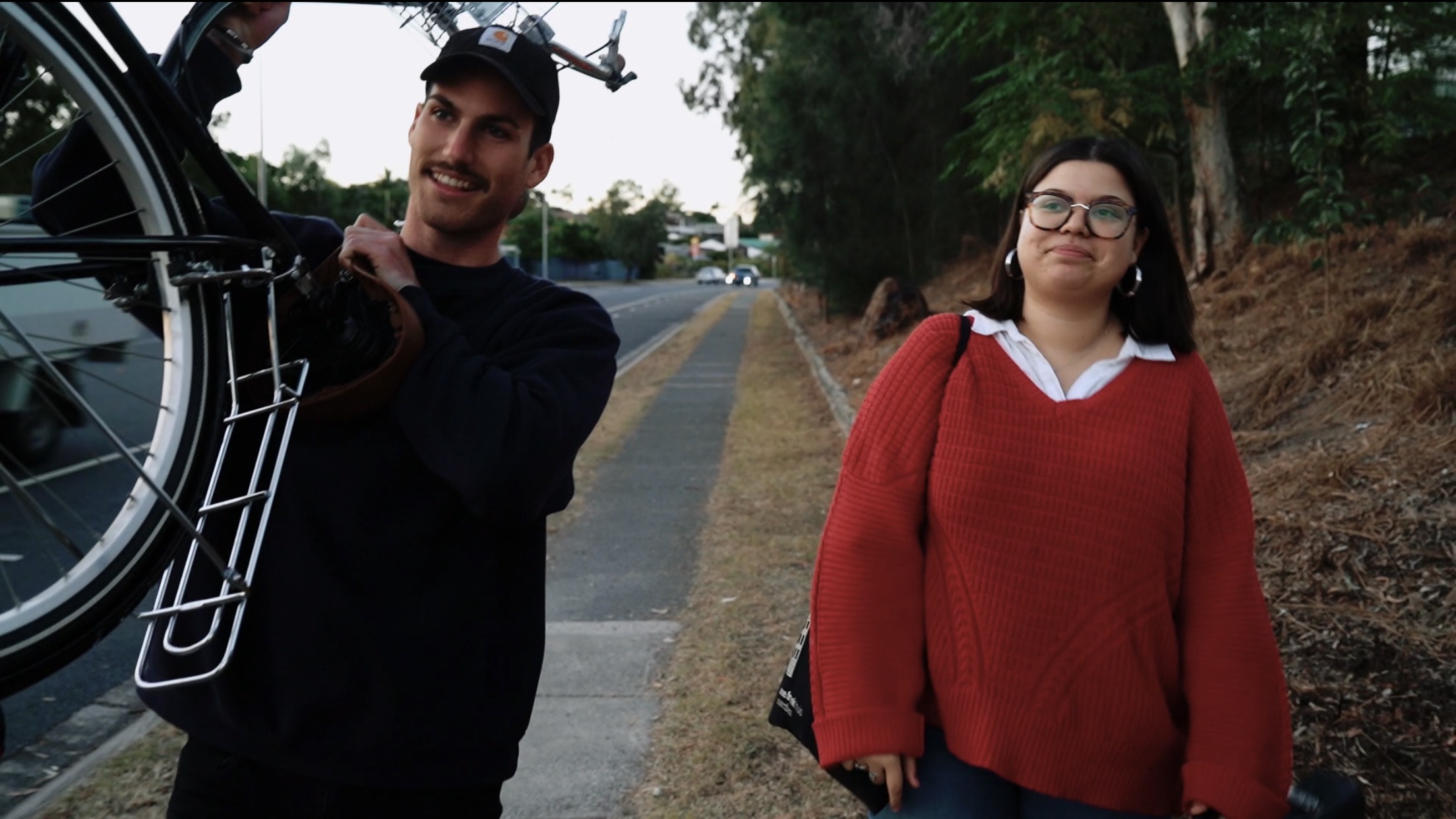 The 48 Hour Global Film Challenge was an event held by the 48 Hour Film Project which challenged filmmaking teams around the world to write, shoot, and edit an entire short film between the hours of 7 pm Friday the 5th of June and 7:30 pm Sunday the 7th of June. Despite their success in the first round of elimination, things didn’t start out smoothly for Eric and his crewmates on that Friday evening. “At about 5:30 pm Friday, we had our main actor pull out who we had organised for the film…and the crazy thing is that at 8 pm, the lead actress let us know that she can’t do it as well.”

In amongst this, the team received their unique details about what needed to be included in their film. For their work to be accepted, the piece needed to feature a spoon, a character playing the violin, the line of dialogue “who’s asking?”, and fit within the “fish out of water” genre. For Eric, this was good news. “In the back of my head, I was thinking the only way this is going to work is if it’s the goofiest, most outrageously satirical film I can possibly come up with. And so, when we got to 7 pm, I was really hoping for something along the lines of romance or comedy – which was fish out of water. So, when that came through, we were pretty ecstatic.”

Acting replacements were made last minute, and with the requirements established, it was time to get to work. Speaking on how much the compulsory conditions influenced the film, Eric said, “we had the creative process to not base it around those certain aspects and to formulate a story that wasn’t constrained by those specific things. The simple route would’ve been to make a story surrounding those specific elements and not trying to do anything creatively insane, but I like to push the limits.” 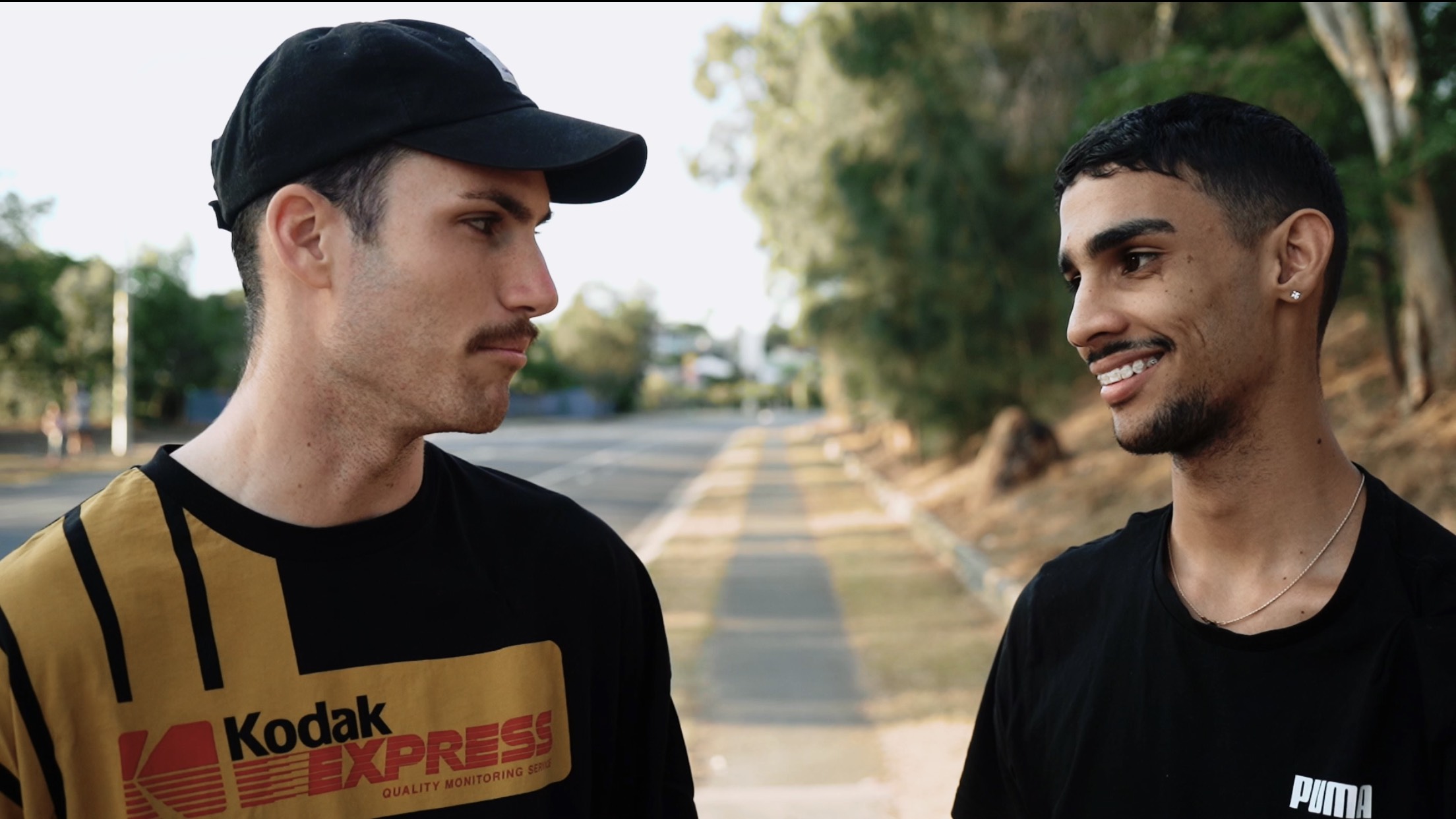 That story would turn into A Southside Love Story, which is about a lovesick Uni student trying to win the heart of a girl, despite the constant taunting from his imaginary alter ego. “At the end of Friday, me and Chris Woodvine (film editor) said to each other: look, this is what we’ve got, we just have to make it silly and it just has to be fun. We only had the one camera, we didn’t even have a boom mic – we had two lapel mics – and we barely had a team to do what we wanted. But I think it worked out for the best in that we just had to do everything over the top and exaggerate our satirical take on romance tropes and all that.”

After a busy Friday night planning and scrambling all the pieces together, Saturday was taken up by shooting the film. The replacement lead actor was a close friend of Eric’s, Lewis Gebbett, who apparently had no prior acting experience. “He did great! He pulled it out of the bag and fit the character perfectly. He was really easy to work with as well – the guy can actually act!” Eric would later state how hilarious and overjoyed he felt when Lewis won the “Best Actor” category for Brisbane.

Shooting A Southside Love Story during that Saturday required some clever structuring of how to best use the time they had. This involved filming certain scenes at different parts of the day to create the illusion of multiple days passing in the film, and choosing nearby locations that weren’t likely to have much interference – a factor aided by the lockdown restrictions that were still in place at the time. 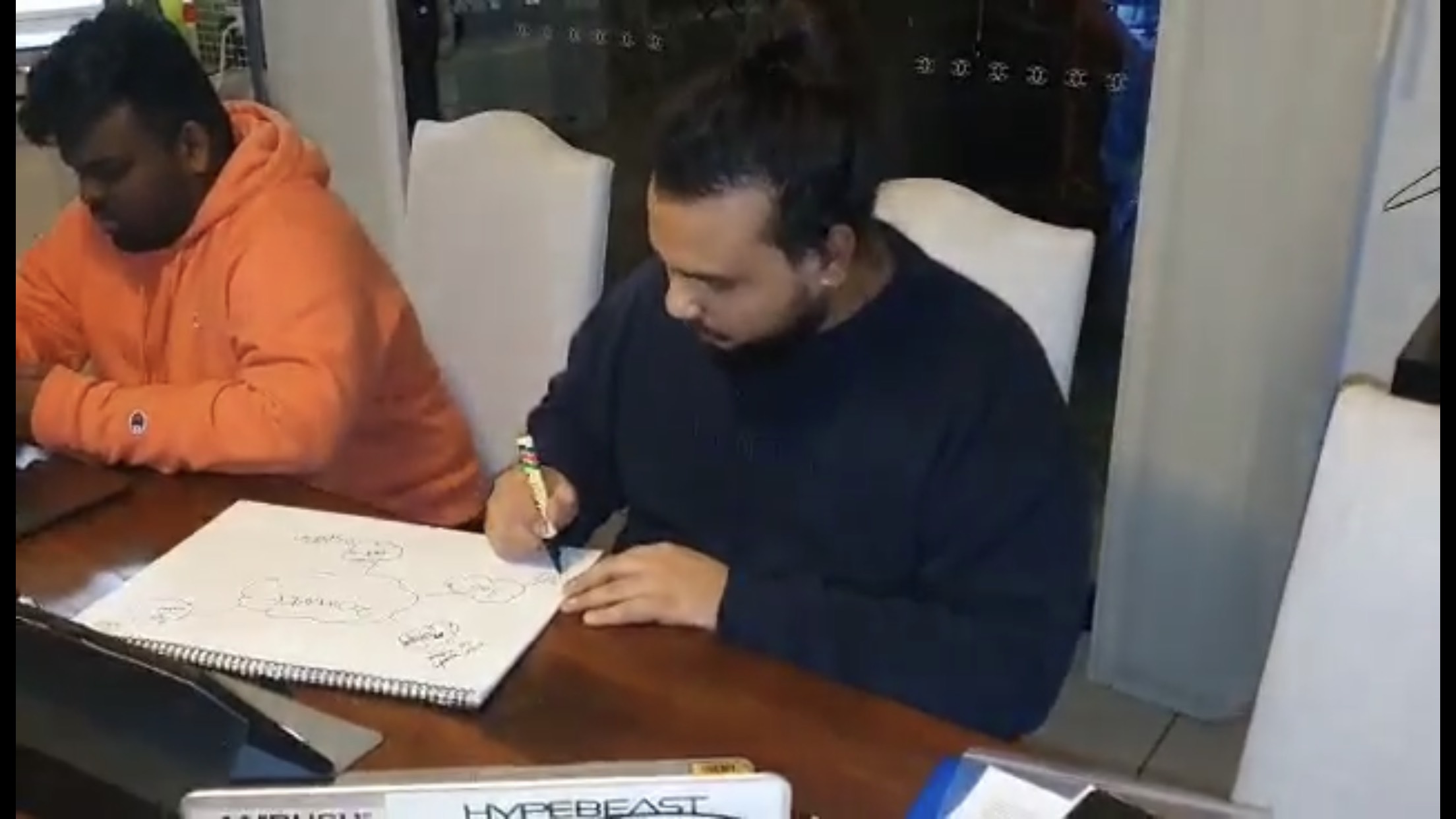 “Saturday came by, and we just had fun with it. Some ideas were written, some ideas we just made up on the fly, and thought they could work well within this part of the story.” And despite the extraordinarily strict conditions and their small team, Eric still wanted the short film to look as professional as possible. “The one thing that we wanted was to make sure that some of it was at least cinematically beautiful so that it wasn’t necessarily super amateur looking at times.”

The team was determined to add some ambitious scenes and elements to their work, which resulted in a romantic montage and fight scene being incorporated into the script. The fight scene, which is fought between the main character and his alter ego, was particularly fun for them to shoot and edit. “We said to the actors ‘have at each other’ for a bit…when I wrote it in, it wasn’t necessarily choreographed or anything. But when it came time to it, one of my favourite films is Scott Pilgrim vs The World, so we took that idea of transporting into a fighting game scene and tried to make it as comical and arcade-like as possible.”

The editing started that Saturday night which naturally bled into Sunday. Eric smiled when remembering those final hours scrambling the film together with Chris Woodvine. “At 3 pm on the Sunday, we were just laughing at all the stupid things that were going on when editing. We are both easily-distracted people, so we would be laughing so hard, and then one of us would snap back to it and be like ‘okay, we have to get back to editing’. And then two minutes later, we would be like ‘we have to add this stupid scene in!’…. and when we hit that delirious point, we just made it the most outrageous, over-the-top, cliched thing we could think of.” 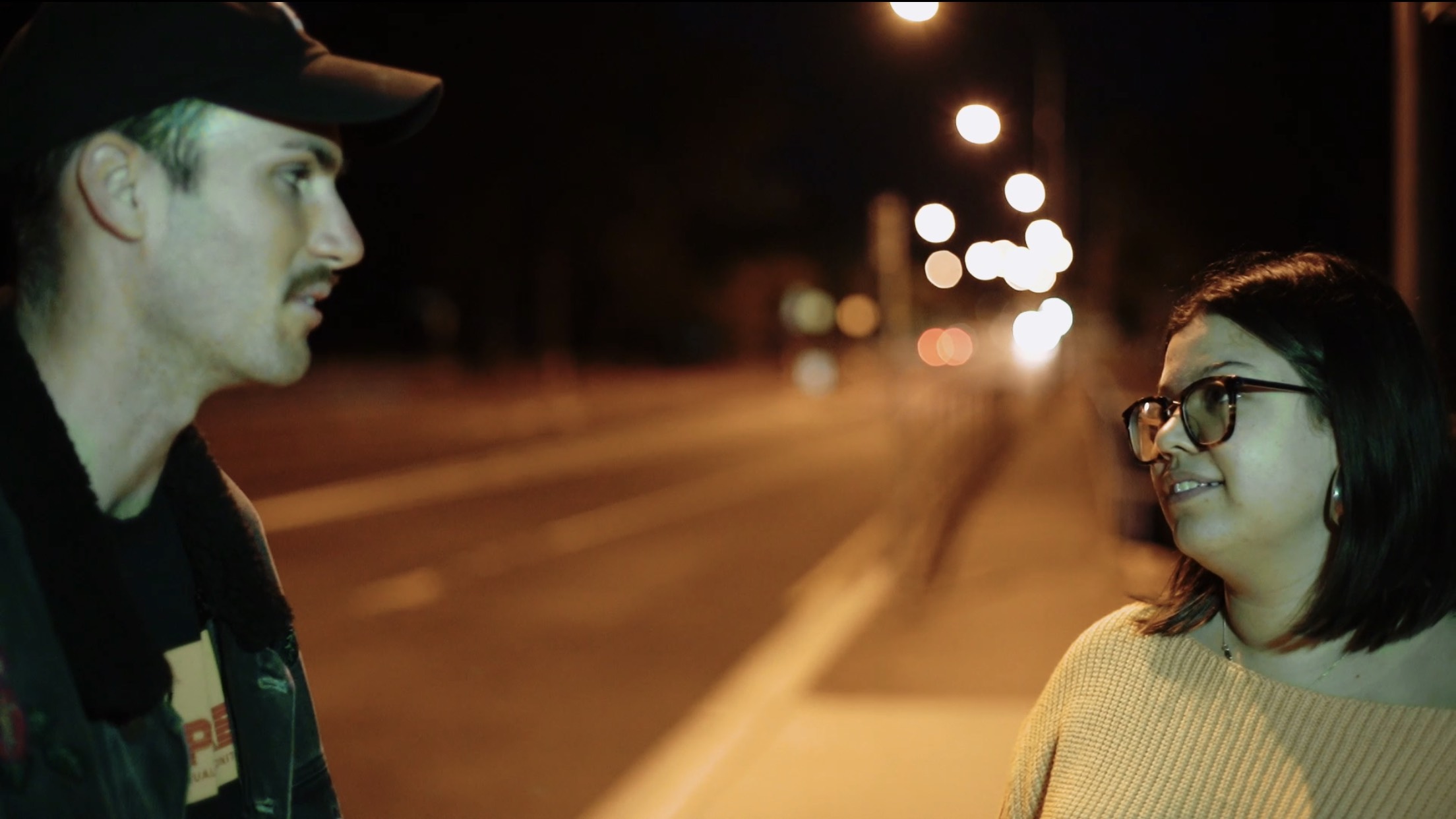 At the end of the exhausting process, Eric was proud of the work that his team had managed. “Somehow, we magically pulled it together,” he said when thinking about that crazy weekend. When I asked him about any advice he would give a team looking to do the challenge next year, he said, “just have the most fun with it. It’s not a competition where you lose any reputation or anything, so don’t be confined to doing something you think is safe. I always say push the boundaries as much as you possibly can… oh, and make sure you have a bigger team.”

A Southside Love Story cleaned up at the 48 Hour Global Film Challenge Brisbane awards, picking up “Best Picture”, “Best Writing”, “Best Editing”, and “Best Actor”. Unfortunately, the film has since not made it past the second stage of elimination. However, Eric is more than happy with what his team has already achieved. “I think winning against the other twelve Brisbane teams was a big enough achievement already… and I’d like to post the film to YouTube so it can be readily available for people to watch it.”

You can continue following the 48 Hour Global Film Challenge here as the voting stages continue and keep an out for A Southside Love Story being published online. For Eric and his team, that weekend was an incredible creative experience in what has been a restrictive year for most. “It was really cool to just break out and unleash a little.”