Bafflement is a fun word to use. It is also the word that describes my state of mind when women completely dissociate themselves with the â€˜fâ€™ word in fear of being ridiculed.

But I will say it. Iâ€™m a feminist and proud to be.

When did feminism become embarrassing? I get irritated that the word has become poisoned and shunned. That itâ€™s constantly met with groans and ignorant â€˜hear we goâ€™sâ€™.

There seems to be this stereotypical, yet completely fabricated definition of a female feminist that makes women not want to identify with the movement. You know the one Iâ€™m talking about. The slightly overweight, aggressive and bra burning woman with unshaven armpits and a delicate fuzz occupying her upper lip. You might find her with the rest of her feminist hussies playing darts where the target is a cut off penis, testicles and all.

Okay, Iâ€™m being slightly overdramatic for effect, but you get the picture. This fake connotation of what a feminist is completely misrepresents the movement. Feminism is not about hating men, or women becoming the superior sex. Feminism is about equality – that men and women are equal in all areas of life. When you start to think of feminism in this way and ignore the stereotypes that fill the media, I think most can agree, who wouldnâ€™t be a feminist? 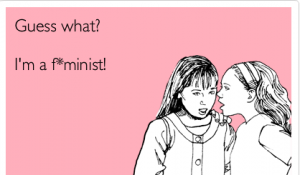 I do understand the unreasonable embarrassment that some young women have with being called a feminist. I remember for most of my high school days I would feel embarrassed to call out misogyny; I didnâ€™t want to be labeled as that complaining, feminist girl. But the truth now is, Iâ€™m going to call it out until Iâ€™ve been heard. Until I witness a change in society where men and women are equal.

I know itâ€™s more comfortable to hide behind the disclaimer, â€œIâ€™m not a feminist, butâ€¦â€ But it is feminism that got us to where we are today and by stopping the movement now we arenâ€™t going to get much further. So if you believe that vaginas are equal to penises, I challenge you to stand up and apart from the crowd and acknowledge that you are a feminist. No ifs and no buts.