The stage is set and the players are ready for a battle between Brisbaneâ€™s best improvisers. This Sunday night Metro Arts will house the clash, with only one question remainingâ€¦ who will be crowned the Maestro of the stage?

Impromafia is a non-for-profit theatre company whose aim is to promote improvisation in Queensland. Along with the performance aspects to the business, Impromarfia also has a large training program attached which caters for everyone from beginners hoping to build their confidence, to those wishing to pursue a career on the stage.

This week The Creative Issue had the chance to sit down with one of Impromafia’s directors, Camilla Percy, to chat about why people flock to, and fall in love with, improvisation, and why some quiver in its presence.

TCI: How long have you been with Impromafia?

CP: I took my first class, in a beginners class, about seven or eight years ago and then just kept going. My progress was kind of performing a lot in the weekly show and then being cast in a few main shows and then just got addicted to improvisation. I went to the improvisation festival in Canberra, I joined the board so I could have more of a decision making capacity and then, due to my teaching background as a primary school teacher, I started teaching classes and directing my own shows.

TCI: The group formed in 2004 and since then you have gone from strength to strength. You are so well known in the improvisation community and have even gone overseas to participate in festivals. Do you think that is because improvised theatre has become more widely appreciated?

CP: It is hard to tell, and I think we have definitely seen an increase toÂ the training part of the association but think a lot of it comes down to consistency. Consistently being there, performing shows, and shows, and shows so that more people hear about you. Then people will be like â€˜oh Iâ€™ve heard about Impromafia, Iâ€™ll go see that showâ€™ or â€˜Impromafia do classes donâ€™t they, and then look it upâ€™. We definitely just get a lot of traffic simply through people wanting to do an improvisation class because it is getting better known as a good way to improve your public speaking skills, presentation and academic ability. There seems to be more publicity about how improvisation helps to improve those kind of soft skills, and as the focus on those soft skills in the corporate world has increased, I think it has sent a lot of people our way.

TCI: Running creative businesses these days is very tough, so what drives you to continue working in this field? Â

CP: Iâ€™m involved in a lot of aspects and I think I have different motivations for each aspect. In terms of the teaching side of it, I guess impro changed my life and I really believe in it as a positive force in the world, and through teaching the classes Iâ€™ve seen it bring so much joy to people and I guess if thatâ€™s the only thing it brings people, then thatâ€™s amazing. Iâ€™ve also seen peopleâ€™s confidence increase though, and Iâ€™ve had people come back the next week and say they had the confidence to ask that guy out or apply for that position at workâ€¦ so thatâ€™s all side benefits as well. I think the main thing people come away with though is being okay with failure. You know, you fail all the time in impro but as long as youâ€™re okay with it, so is the audience, so for a lot of people getting over that fear is a really big thing.

TCI: Throughout high school I had plenty of friends that participated in Theatre Sports but I was always way too scared and used to love a good script. Why do you think improvisation is so polarising – people seem to love it or hate it?

CP: I would challenge anyone who thinks they will hate it to give it a go. The classes are very nurturing and safe, and you form a little community of people that trust each other. I have people that turn up all the time and are absolutely terrified but all you have to do is disarm that personâ€™s fear and make them comfortable, and I donâ€™t think Iâ€™ve ever had anyone that has hated itâ€¦ or at least no one that has told me they have anyway. There will be people that continually push themselves to come every week and will do the performance and not like it but are still glad they did it and see the benefits. Itâ€™s like walking a tightropeâ€¦ afterwards you feel amazing because you did it.

TCI: What would you classify as success for Impromafia? Is itÂ mainly about the training aspect or is it about the performances and putting smiles on peopleâ€™s faces, or is it both?

CP: Yeah it is both. I think to keep it fresh, to keep it growing, to not stagnate in what we are doing and to always be trying new things is success for me. I think itâ€™s also about continually building our audience and getting new people to come and see what we are doing. For me itâ€™s not about selling out shows. 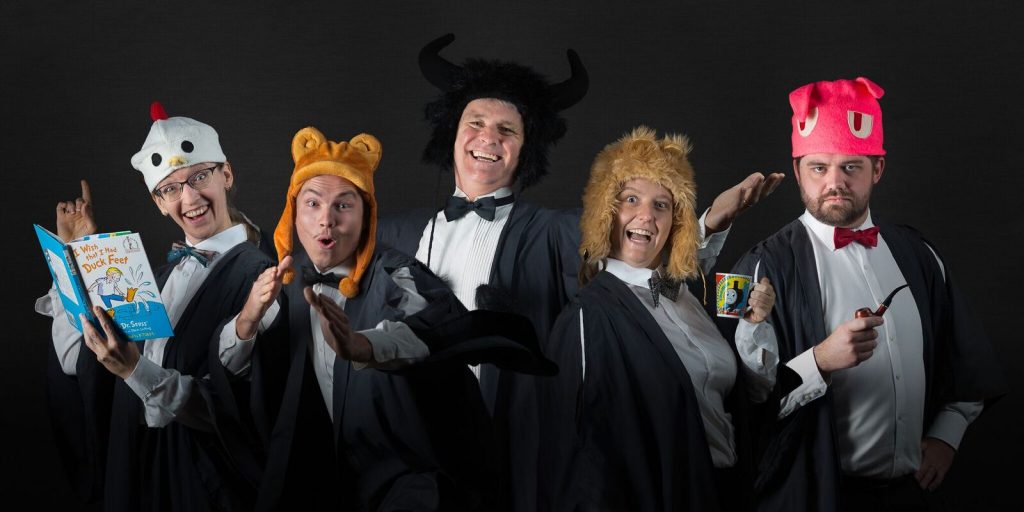 TCI: So I know you do corporate workshops as well as weekly classes, so how do you find people usually react to these workshops? Â

CP: The corporate people are actually loving improvisation at time moment but it definitely does push them. When you do a corporate workshop itâ€™s not about explaining a game and getting them to play to it, you have to build the level of comfort and disarm the fear. It is all about getting rid of the fear. So if you do that in a gradual and sequential manner youâ€™ll have people at the beginning of the class that are looking at the ground and shy, but by the end they might be running around being chickens or something. Itâ€™s almost like a frog in a pot of cold water on the stoveâ€¦ if you increase the intensity so gradually it doesnâ€™t realise itâ€™s being boiled alive.

TCI: What do you see as being the benefits of doing these workshops in company environments?

CP: People do it for all different reasons but one of the big ones is spontaneity. They want people to be able to think on their feet and be creative. Working in teams is also another draw card, and impro does build teams. Just the skills of learning to accept ideas and being able to build on those ideas is very important to team work. To be honest though, a lot of people just enjoy it because itâ€™s fun, but at the end they can see how it applies to their work.

TCI: Â Your new show Maestro really goes back to the roots of improvisation and uses a similar format to Theatre Sports. So for people that have never experienced that before, what can people expect to see on Sunday night?

CP: What people can expect isÂ really a night of variety. There will be a bunch of short scenes, all scenes that youâ€™ve never seen before and that youâ€™ll never seen again. In a way itâ€™s a bit like a snowflake that meltsâ€¦ a fleeting moment when you get to see this beautiful thing before it melts and you never see it again. I guess that is the beauty of improvisation though. The audience turns up and you donâ€™t know what you are going to see and the performers donâ€™t know what they are going to do. In this particular format there will be 16 players and the directorâ€™s aim is to craft scenes with those players to create a night of variety. So there might be a love scene, followed by a song about peanuts, followed by a death bed confession. So audiences can basically expect a night of laughs, hopefully some moving scenes and maybe even something thought provoking.

TCI: Now finally, this is a question I have always been dying to askâ€¦ how you prepare for a show that is entirely improvised?

CP: Everyone always asks thatâ€¦ it is the most common question I think. So my personal approach is to get everyone comfortable with each other. Some people may not have ever worked together before, particularly with bigger casts like Maestro. You really need the cast to learn to be silly together and learn to trust each other. We run through the format so people know where to stand. Doing some activities to prepare for the spirit of the show, so that is like activities to encourage people to be sillyâ€¦ to be okay with physical closenessâ€¦ to take direction as sometimes directors will intervene in scenes. When we do more themed shows we spend time learning about that particular universe so you are comfortable with things that might come up. I mean basically I think it just comes down to trusting that you are prepared enough to be unprepared reallyâ€¦

TCI: Well thank you so much chatting with me today, it was so great to get an insight into impro and I cannot wait to see what Maestro will have in store for me on Sunday night.

CP: Thank you, and I hope you enjoy it.