In the Heart of the Sea - The Tale of Moby Dick

Director Ron Howard did what he does best â€“ telling a historic story through a candid first-person perspective. Anthony Dod Mantleâ€™s cinematography not only matched the pace of Charles Leavitt’sÂ (Blood Diamond) screenplay but provided the audience with a captivating insight into life aboard a 19th Century whaling ship.

The story began in 1850, as an aged Thomas Nickerson (Brenden Gleeson) reluctantly recounts the horrors he witnessed as a boy on the doomed voyage of the Essex to novelist Herman Melville (Ben Whishaw). 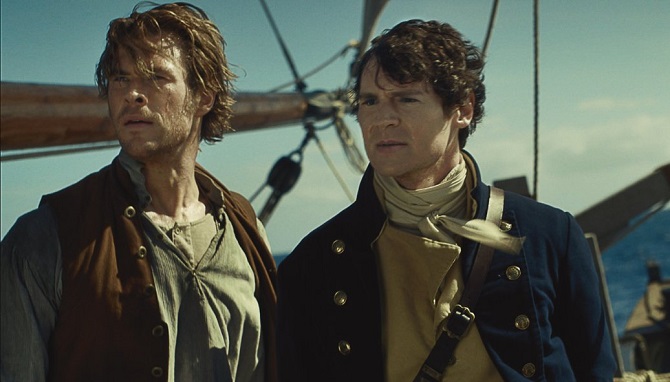 Howardâ€™s vision sets up the harsh realities of a class system, commenting on manâ€™s unfathomable belief of â€˜superior beingsâ€™ and defining a life of privilege. Deeply engrained into the fibres of the Nantucket scene was the supposition that wealth corrupts. This brought the two main characters (Chris Hemsworth and Benjamin Walker) to a tipping point over how to best manage the expedition.

Hemsworth starred as the vesselâ€™s first mate Owen Chase, an experienced whaler, a knowledgeable seaman and a well-respected, all-round good guy. He served as a leader, a teacher and a man of his word which was refreshing against figures who twisted the truth for monetary gains. Hemsworth was able to inspire his crew whilst demonstrating strength, humour and determination in his acting method.

Supported by a cast of critically acclaimed actors which included Cillian Murphy (Red Eye) and Tom Holland (The Impossible),Â the crew shared a bond that transcended beyond the screen. Themes of mateship as well as survival were prevalent. The physical dedication in transforming into lost seaman further enhanced the filmâ€™s themes of desperation and despair, making their sacrifices more meaningful and their endurance more incredible.

In the Heart of the Sea was more than a tale of man versus beast. It questioned manâ€™s conscience, touching on political messages and taboo topics that are still relevant today.

In the Heart of the Sea is now showing in cinemas