The Merry Widow was launched way back in the distant marauding dust of January 2018. Sydney’s then recently reopened Opera House saw an operetta that can live up to the grand expectations of its domicile. With a show that was as spectacle as it was accessible. The fin de siecle love story is opulent and huge in scope. It toured Sydney, Melbourne, Perth and now will hit Brisbane this June. With some tickets reaching well over $100 audiences are promised an experience worth the expense.

Jason Baron-Smith plays Baron Mirko Zeta. A comic fop as rich and classic as lemon cheesecake. He’s verbose, charming and possesses a naturally witty piquant. “I have performed the role of Danilo many times. So now I have graduated to the old fart role” he quips. His affable demeanor denotes the kind of show we are getting here. He’s relaxed, jocund and excited to be performing an opera that conveys the joys of life. 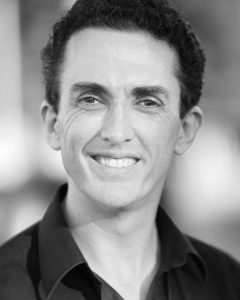 “Yes, well its lovely to have a light one isn’t it? An operetta where no one dies, a light opera in the tradition of Gilbert and Sullivan.” Opera has an elevated quality to it and a wonderful tragic tradition but this doesn’t always make casual theatre go-ers run to the ticket offices. “The elevated thing of opera is something that can seem for a lot of people inaccessible. But this opera is not at all inaccessible. Its sung in English with a story people will totally get into. A production that is very user friendly.” He laughs. “Its very like a music theatre production.” Prescient that Jason mentions this as much of the advertising for The Merry Widow identifies the production as a musical. This is grasp to be contemporary then asserts The Merry Widow as a production that wants audiences to see it.

Perhaps one of the differentiating instruments between Opera and Musical Theatre is the artistic demand that the former requires. Singers must possess the technical skills for the roles, dancers are oftentimes straight from Ballet cores, actors are classically trained. “Everyone in this production are incredible triple threats. They can sing, dance and act. David Hobson who plays Danilo is an opera and music theatre icon. Christie Peluso [who plays Hanna Glavari] is someone who is an absolute star. She sings Vilja like she was born for it.” 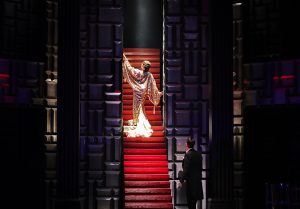 The Merry Widow is both meticulously orchestrated but something free enough to entertain audiences. I suggest people get too uptight about how protected pieces of the Theatre cannon are. “I agree! For gods sake let go of tradition. Tradition tends to make [Theatre] feel like its some sort of museum. A Theatre is a place for right here and right now.”

Justin Flemings translation makes it a particularly contemporary production as well. I ask him what his version compares to the other three versions he has performed in his career. “What makes it lovely is Justin is in the room with us as well.” He chuckles: “This never happens. Usually people who write words for things you sing are dead. He has an implicit understanding of the text and he has flexibility. This production has also been performed in Sydney, Perth and Melbourne so it has received an updated version to earlier this year. There are also some very naughty jokes in this. Its a very funny show.”

Jason himself is not only a tenor singer and actor but an arranger and composer. Did those creative leadership qualities come out during this production? “I think everything you do informs every else you do. I have been lucky to have a career which is an Artistic career. So take Vanessa Scramble who is conducting. I now totally understand where she is coming from and what she is trying to achieve. We can have a shorthand to each other as artists.”

To join The Merry Widow for the production are The Queensland Symphony Orchestra and the Opera Queensland Chorus. I ask him what its like to witness such an incredible coalescing of talent?

“Hugh Parker who is playing Njegus was listening to the chorus rehearse and just said” He stops. “I won’t say the word he said.” Laughing. “But my god the amount of work that has gone in to make them sound that amazing for rehearsal is quite extraordinary and its the same for the orchestra. Then we all come together. The first chorus call and the first rehearsal with the orchestra are always very special moments.” 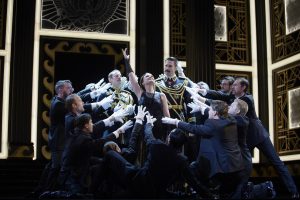 If the cast can be awed by the band and chorus then audiences will surely be overwhelmed.

“You have the visual arts, technical arts, principal arts, orchestra. Seeing this all at the same time is kinda overwhelming. Being in the same room as the Theatre is a totally different experience to watching something on the television. There’s magic to seeing it in the Theatre. The audience gives back energy in their laughter, applause and sometimes just in their absolute attention.”

I then finally ask him if Brisbane is the grand curtain call or will further audiences be privy to this kind of magic?

“I don’t know whats happening after the Brisbane shows. I hope so. This show has legs for ages. This is a particularly pertinent story for men. For them put aside all of the bullshit artifice men put up… you know that’s Theatre!”

What: The Merry Widow is an Opera by Franz Laher

When: It will be performed for seven shows from the 22nd of June until the 30th.

Where: The Lyric Theatre, QPAC