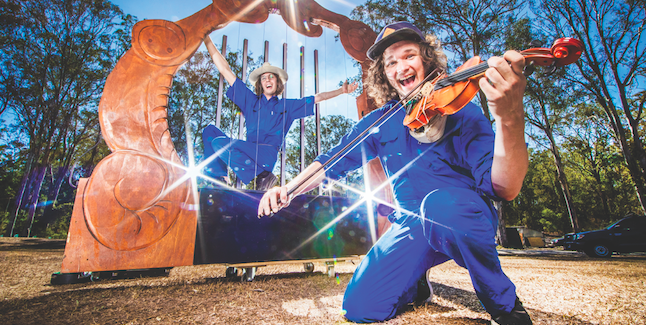 Moving to Australia 8 years ago to work in producing documentaries, Joseph explains that he has always been artistically inclined. “I started making things explode in 3D and I have since then always been working in visual and construction related art.”

For Josh, he studied Design at university with a focus on interactive installations. “I’ve just been concerned with and investigating how to take sound design into an interactive festival space and make it accessible, meaningful, and also raise public art up a little bit more. Rather than just passively looking at things that are big, making them interactive and more meaningfully interactive.”

Joseph and Josh joke that their relationship is similar to one of a work wife, and their humorous and calm demeanours seemingly complement one another.

For their latest installation, which was due to be apart of Brisbane’s Curiocity Festival this April, they had created 13 giant interactive harps.

“They each have their own character, their own carving, they all look different.” Made out of wood and natural materials the installation has a series of strings that when you pluck, produce a different noise each, and simultaneously a light show.

These 2.7 meter high installations, are an in-depth construction, with a process that took 3-4 months. This project, which is a fusion of Arts and Technology, links to their passion of music.

“There is something really nice and magical that happens when you play an instrument. But most people don’t know how to play an instrument, or they are put off by how good other people are. I was trying to create something that was really accessible and easy to just play, and give a little bit of that sense of playing an instrument and playing it with other people,” said Joseph.

“I’m a musician and I know that feeling, but I don’t know if people who don’t play instruments have ever experienced that. So I wanted to give that experience to the general public in an easily accessible way.” 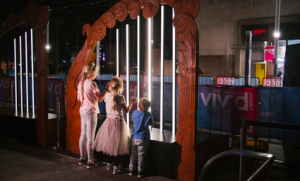 Technology-wise, to make this work, as each string gets plucked the electrical signal turns into a wave. “And then we read that wave and configure it to the micro controller, which is a little computer with speakers, and then you generate the amount of volume and power to work with the string.”

For the pair, who both work across an interdisciplinary range of work, they relay music as the theme commonly in their work. “From music projects, to other large builds, to more software stuff,” Joseph explains that for him personally it always comes back to music and gets related to music in some way.

Josh and Joseph’s interactive installations have, and continue to feature in festivals around the country.

Let Us Introduce: The Syrup Sound