Interview and Review: OXV: The Manual

OXV: The Manual explores the alternate world where peopleâ€™s luckiness is not only gauged, but ultimately affects their life.

Considered a scientific, philosophical romance, OXV: The Manual follows the lives of Zak and Marie, two people who have significantly different luck values, measured in frequencies.

Zak is a low frequency, disallowing him to spend much time with high frequencies, especially the abnormally high frequency of Marie.

After spending over a minute a year together, these two conjure a negative reaction, causing unfortunate events aimed towards Zak.

OXV: The Manual can be like Romeo and Juliet, but instead of families trying to keep them apart, itâ€™s their luck. 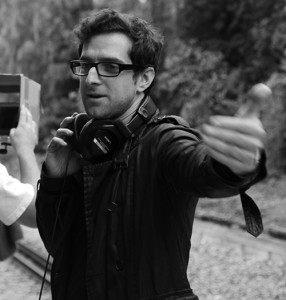 Darren Paul Fisher, writer, director and producer explains it was his way of exploring why we never win at raffles.

â€œThere was literally a moment over ten years ago, I was going out with a girl and we were asked to buy some raffle tickets,â€ Fisher said.

When it came time to leave, his date wanted to stay and see whether or not they had won the raffle.

â€œSo we sat and tried it out and she won something. I won nothing,â€ Fisher said.

â€œI suddenly realised she existed in another universe to me.

â€œShe had a genuine expectation of winning this thing, and thatâ€™s how her life went.â€

With that in mind, Fisher began to wonder if he could quantify it.

â€œWe all know people who have good timing,â€ Fisher said.

Setting aside the fictional aspect of frequencies and luck, a majority of the filmâ€™s science is based on reality.

The film is packed with textures and layers, from the scientist names and in-jokes.

Thereâ€™s an off-handed comment when the Nikola Telsa of the movie exclaims how Thomas Edison stole his (or â€˜herâ€™ in this case) idea.

The parents of the children in this particular community of this alternate reality name their kids after famous scientists, as a person in our reality may name their child after a famous rock star or pop culture figure.

The character of Marie required a different sort of acting skill, where she has withdrawn emotions but is not a robot.

When it comes to acting these emotions, Fisher brings it down to good casting, which is evident in the three age groups Marie is seen in; child, teen and adult.

â€œThey get that imprint of emotion, even if you tell them to draw it all back,â€ Fisher said.

OXV: The Manual is truly a heart warming scientific, philosophical romance Fisher set it out to be.

With a magnificent cast and very unique concept, Fisher has successfully portrayed an alternate reality with enough textures and layers to keep his audience intrigued.

Already in the talks of American distribution, Fisher sees potential in an Australian cinema release during next year.

BIFF: Q&A with the makers of The Railway Man