Thereâ€™s no denying it: acapella is on the rise. With the runaway success of international groups like Pentatonix, the genre is very much hitting the mainstream. We sat down with Brisbane trio ConChord to discuss the finer points of acapella music and working in the Brisbane scene.

I meet Clare Purcell, Tiff Botwright and Claudia Allard in their nominal home at the Conservatorium of Music. In the foyer, a new soundscape is being installed and a menacing, placeless clicking that echoes around the room makes it seem like we could be attacked by West Side Story at any moment. The Con is a tremendously musically diverse and deeply rich environment, and slightly left-of-field groups like ConChord are its natural product.

When I ask how they first came together, Tiff is quick to answer. â€œI chased â€˜em down,â€ she says. â€œI really wanted to start an acapella group.â€

â€œI said yes straight away,â€ Clare chimes in. From there it was simply a matter of stealing Claudia away from a number of other ensembles she was involved in, and the rest (as they say) was very nicely harmonised history. Their first engagement was, fittingly, at the premiere of the second Pitch Perfect film, only a little over a week after Claudia first joined. After that, Clare says, â€œit just took off.â€

While they are frequently a traditional acapella group, ConChord arenâ€™t averse to mixing up their style. â€œWe like to look for unusual repertoire,â€ Tiff says. â€œWe like to use a mixture of vocal techniques â€“African body percussion and some looping as well, so that we can build our songs how we want to build them. So some we like to be really stripped back and we just like to have voice for that impact and other times we like to put some rhythms in there and put [in] some unusual sound.â€

â€œThe whole purpose of it is just building harmonics within the three of us,â€ Clare adds. â€œHaving something in background like percussion or the African beats just gives it that little bit of oomph.â€

Despite an eclectic set of influences and source material, the true style of this group might well be versatility. From working with a full band, to providing backing vocals, to collaborating with a range of other groups, thereâ€™s very little ConChord canâ€™t (or wonâ€™t) do. â€œWe say yes,â€ Tiff laughs. â€œWeâ€™re even looking at some burlesque â€“ but we havenâ€™t quite decided how weâ€™d do it!â€

Weâ€™re meeting during the groupâ€™s usual rehearsal time, and I ask what would normally be happening if I werenâ€™t here. The answer is a testament to just how in-demand the trio are. Holding onto a fixed rehearsal program seems to be an impossibility â€“ instead whatever gig or collaboration is next on the docket takes precedence from week to week.

â€œI think lately weâ€™ve had so much stuff on that weâ€™ve been preparing for that thing solely and then thatâ€™s done and weâ€™re thinking about what we need to do for the next thing,â€ says Claudia. â€œWe never really have time to just sit down and go over everything that weâ€™ve ever done.â€

At the heart of their time together, however, is the fact that ConChord arrange all their own music. From the outside, this process looks rather a lot like sorcery and I ask them to step me through the process of turning a pop song into a gorgeous vocals-only piece.

â€œOne of us will sit at the piano – usually Clare – and we work out vocal harmonies, usually thirds and things,â€ explains Tiff, â€œand then we have a think about how weâ€™d like it to sound, to emphasise different parts of the song. Itâ€™s very much a process of us sitting down and working together.â€

â€œWe pretty much strip the song back completely,â€ Clare adds. â€œStart with a melody, usually and then add the harmonies in either side.â€

â€œWe like to listen to guitar lines and bass lines, especially when weâ€™re laying stuff on the looper â€“ even sax lines in a jazz song â€“ and then we like to sing those â€“ â€ Tiff freestyles some jazz vocals to demonstrate. â€œSo we like to put that side of it in as well. Become a guitar or a keyboard.â€ Â The result is incredibly clever and lovely arrangements of the most unlikely songs â€“ currently, the group have a wonderful cover of Crazy in Love circulating the internet. 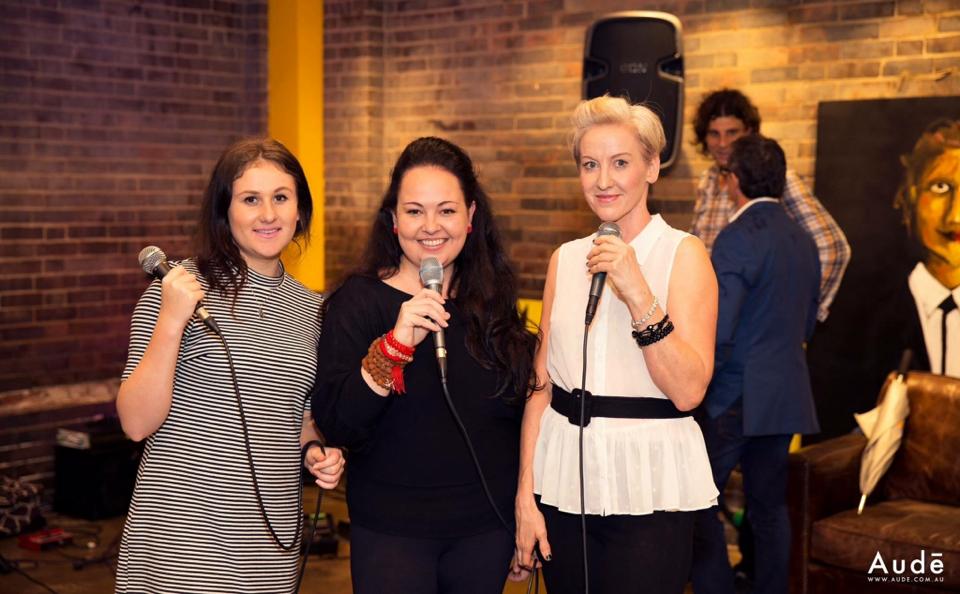 I arrived ready to ask if it was a challenge to book gigs or find work as such a unique group, but itâ€™s quickly become apparent that this is the opposite of the problem ConChord faces. We chat briefly instead about making music in Brisbane, and the increasingly dated perception that the city is second-rate. â€œI think Brisbane has really come of age, musically,â€ Tiff says, and on the evidence, weâ€™re all inclined to agree. Certainly the local arts scene is broad enough to support endeavours like ConChord and support them well. Alongside all their other work, the group have been taking part in the councilâ€™s City Sounds initiative, bringing their music to the streets. I ask what the reception has been like â€“ the answer is resoundingly positive. From children to retirees, it seems as though Conchord has had the mall transfixed.

Putting a busy year behind them, ConChord are looking towards an equally packed 2016â€”with Claudia leaving for America for the first six months, the new year is going to feature a lot of Skype rehearsals for the trio and the tantalising prospect of some international performances. On top of this, Tiff tells me, 2016 is the year they hope to start writing original music. Like everybody else, though, theyâ€™ve got to get through the Christmas season first.

â€œWeâ€™ve got one,â€ Clare says, â€œwe need to get another thirty.â€

If anyone can pull it off, however, itâ€™s probably these ladies. With ConChordâ€™s star firmly on the rise, we can look forward to hearing a lot more from this group, both at home and abroad.

To check out more of ConChordâ€™s work, head to their webpage here.

The “Secret Art” of Dr Seuss

Dani Cabs – Behind the Orange Poncho