Making waves both locally and internationally with his emergence into the music scene, Dean Lewis hit number 12 on the ARIA charts within just 9 months of releasing his first song.Â

Inspired by the likes of Oasis, The Verve and other British bands, Deanâ€™s music and lyricism has become a fine blend of British and Australian waters. He loves how the â€œEnglish have a beautiful way of phrasing thingsâ€. We recently had the chance to have a chat to him about his journey so far and first headline tour!

The Creative Issue: How has your tour been so far and how did your first ever Melbourne show go!?

Dean Lewis: It has been incredible! Mind-blowing stuff, considering about 9 months ago I supported Lisa Mitchell at Howler and then to sell it out the other night for two nights in a row was just crazy.Â To go out on stage and hear screams was just such a moment for me. I donâ€™t usually have those sorts of moments because Iâ€™m quite focused on whatâ€™s next, but for me to go â€˜oh wow this actually is really movingâ€™ was really big. The shows have been incredible

TCI: How do you feel people have been receiving Same Kind of Different since its release?

DL: It has done really well on the radio, and screen numbers have been insane. Itâ€™s just really crazy. When you write a song in your bedroom you donâ€™t really know or think about how much impact it could make. You donâ€™t know itâ€™s going get these numbers, you donâ€™t know that people are going to hear it. In regards to Riverdale coming along and using my song for such an important theme kind of blew everything up a lot.

TCI: How did it feel having your music on Television shows (Riverdale and Shadowhunters)?

DL: It was weird. My publisher sent me a request and approval proposal and I didnâ€™t really know much about it since the show wasnâ€™t out yet. So I said yes, and then the show gained a cult following. I was definitely naÃ¯ve to how much impact it could have. It was really weird and cool at the same time. It almost felt as though that song (Waves) was written for the scene it was in, it was crazy how it related to the actual theme. I think thatâ€™s why it was so impactful, because they just lined up so well. 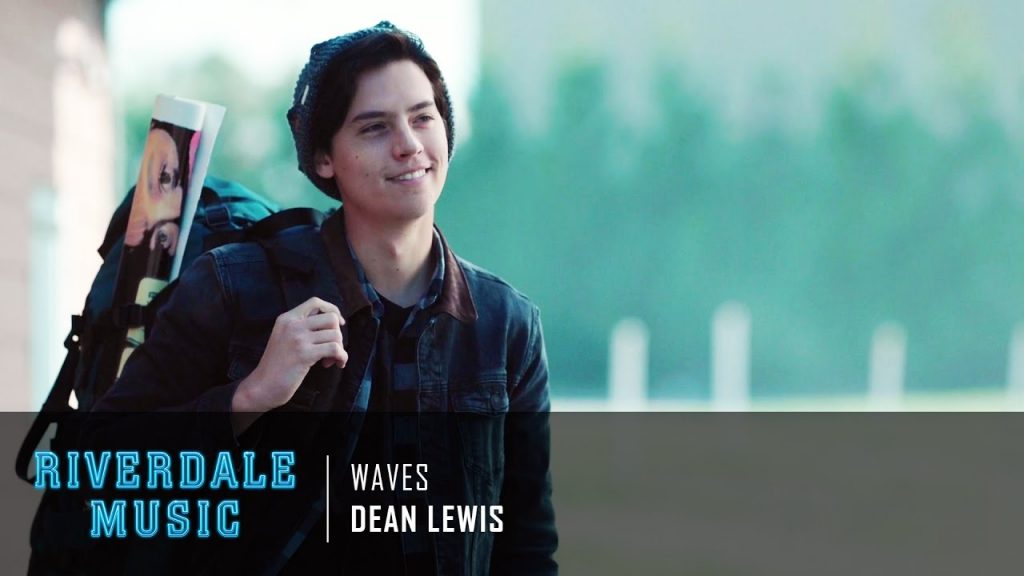 TCI: What would you say is the overarching concept behind Same Kind of Different?

DL:Â Iâ€™m not trying to reinvent the wheel or anything. My goal is to write good songs. I just feel like a lot of people come out maybe saying that they are the newest thing and Iâ€™m just me and Iâ€™m doing my own thing, not trying to do anything crazy or weird, Iâ€™m just doing me. That was why I called the album Same Kind of Different.

The songs are quite different, for instance the overarching theme ofÂ Waves is about trying to get that feeling and excitement of youth back, and some of the other songs are about love and lost love. I just write whatever is happening really. Try to start it with something real.

TCI: We heard that waves was written in one sitting, is this true?

DL: I had the idea for half of this song and took it in, kind of sketched out (like most of my songs), and a day and a half later it was basically demoed. In this place called Hitchen which is a town north of London. I remember putting my iphone in front of the speaker (as producers usually take a bit of time before they send you the track) and then got a train back from Hitchen to London and I was listening to this recording of the song and I messaged my manager and was like â€œhey, this actually feels pretty coolâ€, and then we got the song back and that was pretty much it. I got it mixed and then released it.

The funny thing is, it was just supposed to be the introduction track and it just hasnâ€™t stopped 9 months later. It never stops and itâ€™s really exciting.

TCI: Do you prefer to write and record your music in the UK or Aus?

DL: Both. The guys (UK) that produced Waves are doing half, maybe three quarters of the album because I work really well with them and I can be honest with them. Thereâ€™s also a real vibe in Hitchen. The place I record is on an English farm, itâ€™s all green and thereâ€™s lots pf nature. In saying that, I recorded a bunch of my EP, and next single Lose My Mind with John Castle which was in Melbourne. To me, if I can just be honest with someone and trust them, I can be comfortable recording with them.

TCI: Â When did your management discover you? Or did you find them?

DL: I remember 4 years ago, I emailed about 30 managers from the industry and no one got back to me.Â What happened was (this was about 3 years ago), one of my best mates was one a boat cruise and this girl who used to manage Savage Garden was one the boat cruise and he was like â€˜hey, you should listen to my friendâ€™s songâ€™ and she has a publishing company and her name is Leonie Connolly and she basically met me, heard some of my stuff and signed me to a publishing deal and I started writing songs for other people. She then introduced me to everyone including managers, then the record label started getting excited. So it was basically just a chance encounter.

Iâ€™m not even trying to be humble, but if youâ€™re a songwriter you donâ€™t really think what youâ€™ve done is good enough, you might not like your voice or the songs you write, but maybe they are good enough. I found that I needed that team around me to be like â€œyou can do thisâ€. Then I just started putting songs away and then one thing lead to another and then a song would open a door, and then another song would open another door. So thatâ€™s how it kind of happened for me. 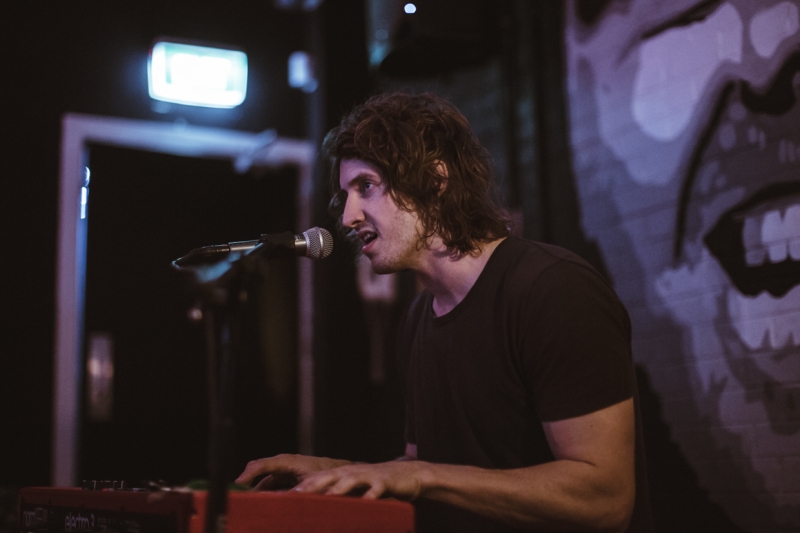 TCI: Where does your love of Oasis alongside other British bands stem from? Was it a family appreciation or did you discover them on your own?

DL: My Dad is a massive Oasis fan and we always had music playing growing up. He showed me and my brother this Oasis live 2005 DVD of them playing at Manchester and I can just remember me and my brother sitting there watching it and it just blew our minds. It was crazy how cool they were and the songs they were doing. I spent so many years (maybe 3 or 4) where Iâ€™d get home and just watch Oasis videos and all the acoustic videos and just Noel Gallagher playing live in Torquey

I donâ€™t think I really knew it but I feel like thatâ€™s when I hit the 10 000 hours, like in the 10 000 Hour Rule. I was subconsciously absorbing everything and I picked up a guitar and started learning and covering their songs. I feel like he taught me how to song-write.

TCI: Was that when you first learnt guitar and realised that music was something that you wanted to pursue?

DL: My Dad got us guitar lessons when we were quite young (about 10 or 11) and I did them for a little while but like anything I kind of put it away. I think you needed to find it, something canâ€™t be forced on you just like with writing songs. Later on, when I found Oasis, I chose to pick it up again but I remembered some of the chords and Dad brushed me up on the rest.

TCI: Do you find more inspiration from UK artists?

DL: I think so. At least at the start. I basically grew up just listening to English bands like The Verve and Oasis. Now Iâ€™ve kind of branched out a little bit, but Iâ€™m still a big fan of English music. And since I spend so much time over there recording I think that really comes out in my music.

TCI: Do you have any pre-show rituals that you like to do before going on stage?

DL: Yeah! I do this thing called power posing because I watched this TED Talk about it! And I was showing Jacob from PLGRMSÂ (the guys that have been supporting me) backstage.Â I love it because it gives you this great confidence! You basically just look in the mirror for 30 seconds and put your hands up or do a star jump and just hold it. It gives me this fake sense of confidence and I feel pretty good when I go on stage. And then I just do some vocal warm ups.

TCI: How did shooting for a new music video go a few days ago? Are you allowed to tell us a little bit about the concept?

DL:Â Itâ€™s a really interesting concept! With music videos, I donâ€™t mind if the concept is different to the song. It doesnâ€™t have to be literal as long as thereâ€™s an emotion there. So for instance Need you Now includes a guy thatâ€™s addicted to drugs, but for me, thatâ€™s not what the song was about.

And for this one â€“ Lose my Mind, weâ€™ve got an actor in a scuba suit. I canâ€™t say too much about it but itâ€™s really out there and makes you think and itâ€™s quite emotionally powerful as well.Â Iâ€™m not starring in it either because I donâ€™t like being in my music videos, I find it more powerful this way.

TCI: Have you got any other songs in the works at the moment?

DL: Yeah! Thereâ€™s so many new songs, and for this tour Iâ€™m playing 5 of them. The album is pretty much done, Iâ€™ve just got to record 3 more… Itâ€™s all coming together

TCI: Whatâ€™s the rest of the year looking like for you?

DL: Iâ€™m going to America for a bunch of shows and then just getting the album ready and doing these tours and some festivals in-between. Itâ€™s going to be crazy!

Dean will be doing a headline tour around Australia after his return from America. You can catch him live at these venues and is also set to play Spilt Milk and Vanfest this yearâ€¦ 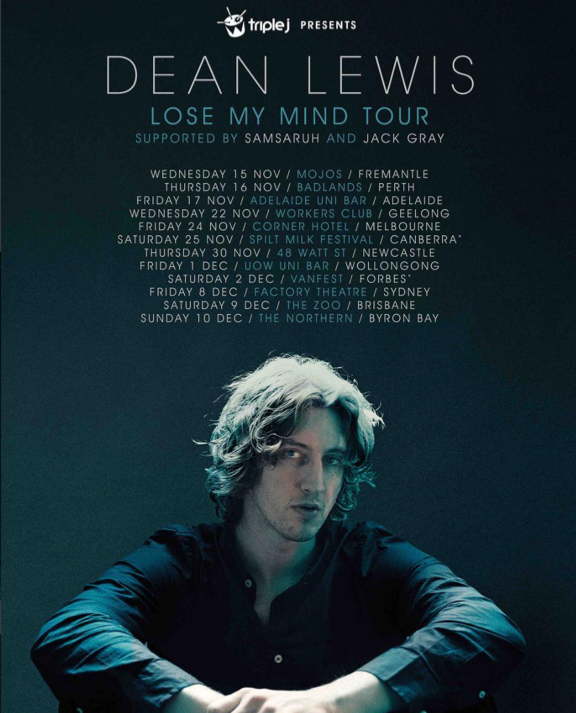