Renowned chef Josue “Josh” Lopez has a passion for using Australian native produce in his cooking. From being named Young Chef of the Year in 2010 for his work at Brisbane’s Two Small Rooms,Â working with Gordon Ramsay at Maze in London, to becoming part of the team at four-time world’s best restaurant winner,Â Noma, Josue Lopez is truly a force to be reckoned with in the kitchen. On the 18th of July as part of Brisbane’s Good Food Month Lopez joinedÂ Ben Shewry and James Viles for “My Country, My Cuisine” which tackled the age old question: can Australian cuisine be defined? The Creative Issue had the privilege of speaking with the chef in his preparation for the festival.

TCI: In three words, what does food mean to you?

TCI: What influences and inspires your work?

Josue Lopez: Definitely the arts, and produce in general. You know, a love of ingredient.

TCI: Can you tell us a bit about your role as executive chef at GOMA?

Josue Lopez: It is very diverse and ever-changing. We creative menus to adapt to each exhibition which is very unique and a lot of fun. It is a wonderful challenge and involves a lot of teamwork. I have twenty-one chefs across three venues plus catering seven days a week. It really couldn’t be done without amazing teamwork.

TCI: How do you go about creating your menus and what can diners expect?

Josue Lopez: Seasonality is first and foremost. Using that as my starting block I then look to the current exhibitions or even just to things that have inspired me throughout life. But most importantly each dish, particularly for the GOMA restaurant, has to have a story. A tangible dialogue on why each element is on the plate. For example we had the Harvest exhibition last year and it was fantastic to see artists tackle issues like food waste. Using food wastage as a starting point I was able to create a dish of cauliflower thatÂ utilised not only the florets but also the stalk and outer leaves, pairing that with some pine nuts and raisins. It was a beautiful dish and one of my favourites because it really captured how all of the plant was edible and that each of the components are wonderful in their own right. Something like that would not have been possible without the context of the gallery.

TCI: It must have been an amazing experience to cook for the world leaders at the G20, could you describe your experience?

Josue Lopez: There was six months worth of planning involved. It was one of those dinners where it’s not about you it’s about everyone else and my brief was to showcase Brisbane and Queensland and what makes us unique. Hervey Bay scallops featured, using coastal herbs, Moolooloobah squid, and for main course we used arguably Australia’s best wagyu from Kenilworth, supplied by Pete Cabassi. And if you can imagine the backdrop of the gallery really makes everything pop. Everyone also tried the signature dish from the restaurant which is the wattle seed custard. It takes it’s cues from indigenous dot paintings. Native ingredients are pivotal in my exploration of cuisine because I believe it is really what makes us unique and different.

TCI: You use Australian native produce in your cooking, what are some of your go-to ingredients to work with?

Josue Lopez: Definitely wattle seed. The wattle seed custard dish has become a signature so that will never leave. I also use lemon myrtle quite regularly. I can’t wait until native Australian produce are used as everyday ingredients. And for people to use them in the correct way, like seasoning fish with lemon myrtle. You know, everyone is pretty comfortable picking up curry powder but not so much lemon myrtle. Things are becoming better though and more mainstream. All it takes is one of the big supermarket chains to support it. 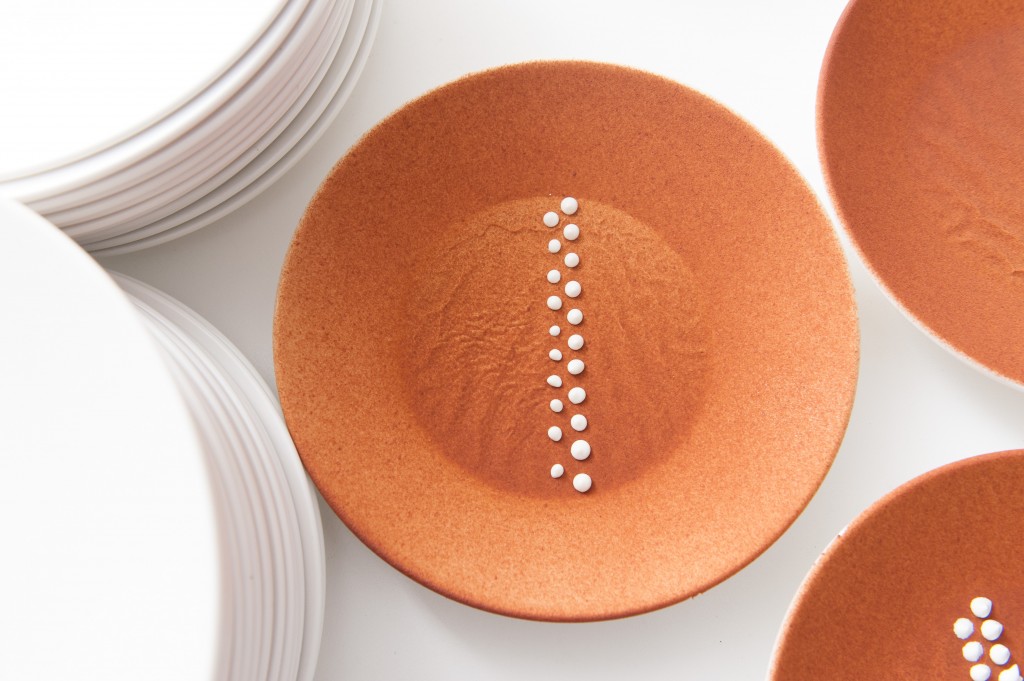 TCI: Could you tell us a bit about your history as a chef and your personal experiences with Australian cuisine?

Josue Lopez: I completed my apprenticeship at Otello on Oxford in Bulimba cooking northern Italian food. The small kitchen and family-orientated environment allowed me to cook with love and I didn’t realise how pivotal that would be for me, just for my love of food. I didn’t know what a Michelin star was, I was just doing it because I loved it. In 2007 my wife and I travelled to London where I worked with Gordon Ramsay at Maze and at the time it won restaurant of the year. It was a crucible of not only creativity but energy – it was an incredible time. But it wasn’t going to be forever, Brisbane is my home, I want to make it work and we’ve got amazing produce. I came back as head chef at Two Small Rooms and ended up winning Young Chef of the Year in 2010. After which I wanted to spread my wings a little bit so I joined Javier Codina working as his head chef for what is now known as Moda. But I knew I had one more Michelin star experience left to have and I was very blessed to work at Noma. At the time they had just won their second world bestÂ title and in the three months that I contributed they went on to hold that number one ranking. It really made me appreciate using local food and using what is around you, and it inspired me to explore our cuisine. I never use imported products because it’s just out of context. We have to celebrate what makes us unique.

TCI: For the segment “My Country, My Cuisine” as part of Good Food Month you tackled the age old question: is there such thing as Australian cuisine? I’d love to hear some of your insights on such a widely debated topic.

Josue Lopez: I certainly think that what makes Australia unique and something which we should be proud of is our open-mindedness. Australia is a melting pot of cultures and cuisines. Like the fact that Thai food may as well be Australian. In other words we use Australian produce and enhance it with Asian sauces or Asian techniques. It’s almost like a fusion. Further to that, the fact that we don’t have hundreds of years of developing the food language and the fact we are a colonised state meant settlers planted their own produce without much investigation of what was actually around. So immediately no one was forced to look at what was local. Which I guess is a little bit of a shame but that is all changing now. As information becomes more easily transferred through social media it’s a really exciting time and I think we’re starting to develop and forge something that is really Australian.

TCI: Where do you see Australian cuisine heading in the future?

Josue Lopez: It is always going to be a balancing act. Food is about story telling and the most successful dishes are the ones with a profound story. Not necessarily complex though, sometimes it’s the most simple. Australia will keep developing and telling our own stories.

TCI: Good Food Month is an exciting time for passionate foodies, how important are these types of festivals for the food industry?

Josue Lopez: Absolutely pivotal. People become a lot more connected with food and that’s really wonderful. Above all people really just want to learn and get better. It’s fabulous for promoting local ingredients. One thing that I’ve noticed is that it’s just as much about entertainment. People really want to be pushed and experience new things. As long as there is a good balance of entertainment and content I think that these festivals are really relevant and will only continue to develop.

TCI: What is your favourite part of the festival?

Josue Lopez: The dinner with James Viles is really important to me and of course the lead up with Ben Shewry. It’s really humbling to have him [Ben Shewry] talk about what food means to him. I think for Brisbane to have an audience with him is great. It’s humbling for me just to be on the panel working next to him. Having someone like that [Ben Shewry] sharing profound knowledge and stories of what they do is amazing. And working with someone like James Viles and collaborating and developing the menu has been a wonderful, creative process. It seems like it’s a real age for collaboration between chefs. Long gone are the times when chefs wouldn’t share recipes for fear of being outdone. It’s through beautiful collaborations that make amazing food. I’m sure the people that will come to the festival will experience something truly unique.