Last week we caught up with Australiaâ€™s hip-hop hero ILLY ahead of his Two Degrees Regional Tour! Pumping out music faster than he can spit a beat, this 2016 album is in fact his 5th studio album.

To celebrate this, Illy is playing over 30 venues across Australia which will include Queensland, New South Wales, Tasmania, Western Australia and South Australia. He will also be appearing at festivals such as Yours and Owls and is set to headline at Sprung Festival and will be headlining Sweaty Palms on the Central Coast.Â Support acts Citizen Kay and Kuren have also been released and will be appearing at select shows.

Amongst talk of tours, new music and inspiration, a very serious question had to be clarifiedâ€¦

The Creative Issue: We have quite an odd question for youâ€¦ In the music video for Tightrope, was it hard to mouth the words to your rap whilst rowing a boat in the middle of a lake?

ILLY: It got harder as the day went on [laughing]. It was filmed in Sydney and the start of the day was really cold, but after 10 hours of rowing that darn boat I was sweating. Thereâ€™s a scene in the video where I throw the oars away and that was a legitimate outtake of me cracking the shits and we ended up using it in the final thing.

TCI: How are you feeling about your upcoming shows as part of The Two Degrees Regional Tour?

I: Iâ€™m really looking forward to them. The tour is off to a flyer so far with almost all of the shows being sold out, and itâ€™s looking like itâ€™s a trend thatâ€™s hopefully going to continue. So thatâ€™s really awesome!

TCI: Congratulations on this being your 5th studio album! Do you believe that Two Degrees particularly reflects your growth as an artist?

I: Yeah, I do! I think itâ€™s definitely the most developed of the albums in terms of what Iâ€™ve put out so far. I definitely went in a different direction with the song writing, and wanting to make it less of a hip hop album and more of a broad album with elements of pop and electronic. So yeah, I really do feel like itâ€™s the best album that Iâ€™ve put out to this date. It really sets everything up for whatâ€™s to come. 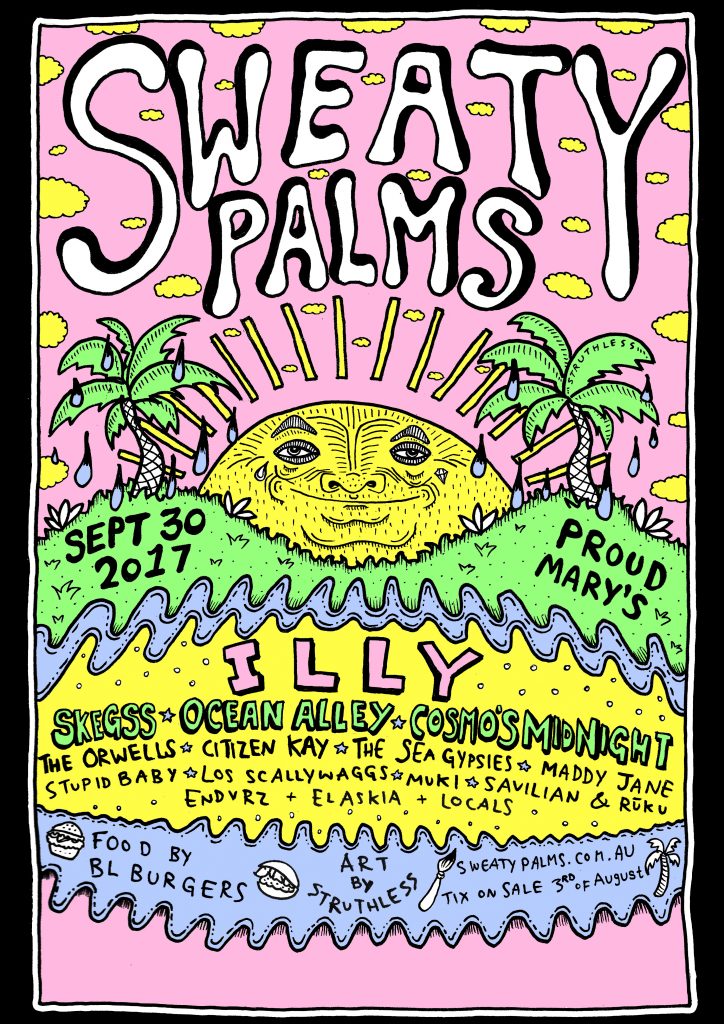 TCI: Whatâ€™s the concept and inspiration behind this new album?

I: Thereâ€™s no real overarching concept, I was just wanting to push myself in new directions. Iâ€™ve always had a lot of melodies in my songs and I have always loved writing hooks but I’ve lacked the confidence to really go for it. WithÂ Two Degrees was coming off the back of Tightrope which was a really big success, I had a lot of confidence in going in that direction. So following this new challenging direction would probably be the main focus or theme throughout the album.

I: Wherever to be honest. I have a lot of friends, particularly in Australia that are making amazing music, which is hard not to be inspired by. And then obviously I listen to stuff from all over the world. Wherever the inspiration comes from Iâ€™m happy to latch onto it.

TCI: We had a chat to Vera Blue a few weeks ago who has been really into incorporating more of those electronic sounds. What is it like collaborating with artists such as Vera Blue?

I: Itâ€™s awesome! I love her, sheâ€™s such a great girl and an incredible talent. Iâ€™m still very thankful that when I showed her the demo with my vocals on it, she actually managed to see that it was going to sound good when she sang it…I write the stuff but I donâ€™t have anywhere near the voices that these artists do, so when I send it to them and hear their take on what Iâ€™ve written, it really brings the track to life. Thatâ€™s one of my favourite things about music, is getting these collaborations to happen and seeing the thing I had in my head actually happen. Itâ€™s an amazing experience. 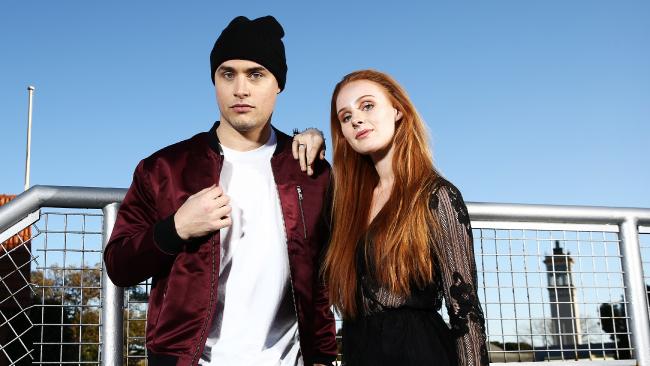 TCI: What would be your dream collaboration?

I: Song writing wise it would probably have to be someone like Sia. Or another song writer thatâ€™s quite ubiquitous at the moment. I feel as though I could really learn from them. Producing wise there is too many to name, but working with the Hilltop Hoods was a long-time ambition of mine since I was about 12, so getting to do that a couple of albums ago really ticked that one off.

TCI: We hear that you have finished a law degree! Was music still your end goal whilst you were completing your degree?

I: Music was always the goal. Iâ€™ve been writing raps since I was 12 and Iâ€™ve been touring, playing shows and working on music well before I got into law. By the time I graduated I was two and a half albums in and was already touring around the country off my own back. So law was always a fall back, I wasnâ€™t great at it and I was never a good student which made it really tough, but music was always my passion and I was just lucky that at the time I graduated, I didnâ€™t really have to worry about it. I was able to put all of my eggs into the music basket which worked out so well.

TCI: Did your knowledge of the law help you at all when starting your own record label?

I: Not directly. I learnt enough from studying law to know that I could never be my own lawyer. The one thing that I did take away from the course more than anything is discipline, not taking shortcuts and having a good work ethic. Thatâ€™s something that I probably didnâ€™t have before I started the degree, but I definitely have now. Itâ€™s an expensive way to learn that lesson, but that would be the thing that I apply in everyday life now and Iâ€™m so happy to be doing exactly what I want to do right now.

TCI: Have you got any new songs in the works?

I: Yeah, I do! Iâ€™ve been working on demos this year, Iâ€™ve got a few pretty good ideas. Iâ€™d like to have another new song out before the end of the year, weâ€™ll see how that goes. So yeah, thereâ€™s a few things in the works, nothing that close to being finished, but now that this tour is underway, I can sort of have one eye on what happens after itâ€™s done, so in a couple of months Iâ€™ll have a better answer.

TCI: What kind of genres and sounds have you been enjoying incorporating more recently?

I: Definitely more electronic and pop. Since I want to start writing for more people, and I think that my strongest suit is pop, Iâ€™m paying a lot more attention to that now. I think really on the whole, you listen to most modern music and thereâ€™s a lot of overlap between hip-hop, pop and electronic. Those would be the three genres that Iâ€™m listening to and incorporating at the moment.

TCI: And finally, whatâ€™s your next 6 months looking like?

I: This tour goes until early December, then probably working on music and playing some more shows over the summer. Then Iâ€™ll hopefully have some new music ready to rock, leading towards another album.

You can find tickets for Illyâ€™s Aussie tour here, or catch him headlining at Sprung FestivalÂ or Yours and Owlâ€™s festival, and Sweaty Palms.Â Stay tuned for more content from ILLY as his musicÂ is about to get a whole lot more than two degrees hotter. 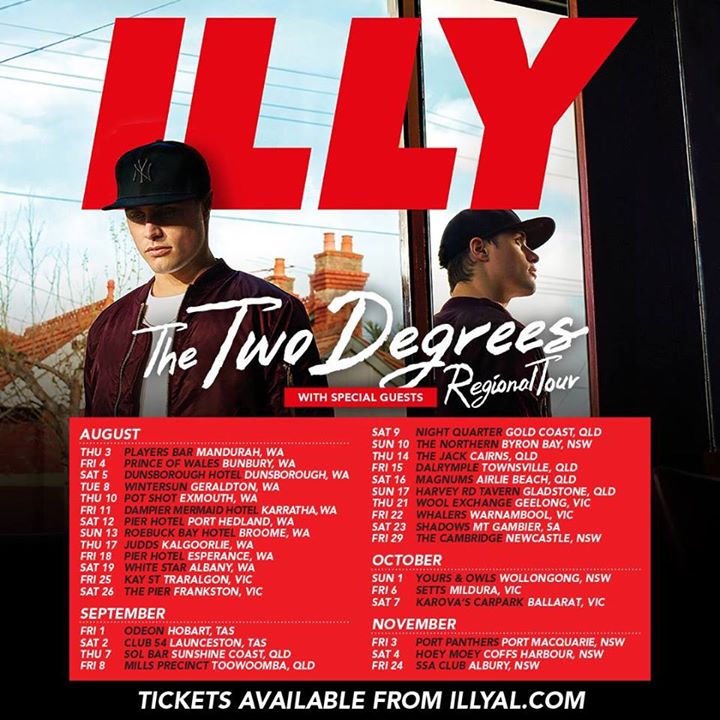 Dune Rats on Their Biggest Year Yet