Isabella Jacuzzi, the electric wunderkind of the fashion world, is living your childhood dream.

Still a student, the 22-year-old already has an impressive stack of accolades behind her; from having her art exhibited at GOMA for the Creative Generation Exhibit, to being the QUT Fashion Front Rowers Travel Bursary recipient last year.

This week, JacuzziÂ was kind enough to slow down just long enough to have a chat!

TCI:Â Where do you draw inspiration?

Isabella Jacuzzi:Â I think it comes down to what Iâ€™m wearing, my aesthetic at the time, and it sounds really broad, but bits and pieces of colours and shapes. It can be anything. It can be inspiration from another designer or clothes that you already have. Or like [my friend told me] she wanted me to aesthetically match her Zimmerman [outfit for her party]. But yeah it just depends, it can be anything, anything that takes my fancy I guess. Itâ€™s all really subconscious too, I donâ€™t think I set out to do it, it just kind of happens and evolves. 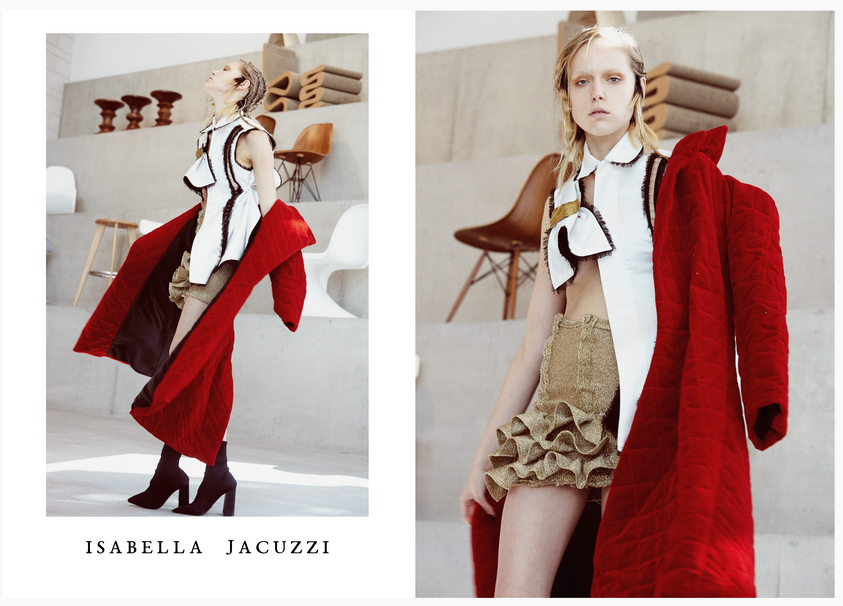 TCI:Â Do you surround yourself with creative sources? Or following your favourite designers on instagram or something?

IJ:Â Yep I do, I have a separate instagram, like a private account and I just follow designers and aesthetic looking instagrams and then I have my own account which I try to include a social aspect to. People want to see a face, they want to recognise someone and they want to follow your journey and be part of it, so I guess Iâ€™ve always placed a huge emphasis on my instagram. In high school I got quite a lot of shit for it, even when I graduated. I donâ€™t think people really understood that it was my career and I had to put my name out there, I have to get people to see what Iâ€™m doing to get further recognition and all of that.

TCI:Â So you obviously do all the designing, but you also do the photography, marketing, and you even model some of the clothes. Do you think thatâ€™s necessary for young emerging designers?

IJ:Â Yeah, I think everyone is going to have their own way of trying to break into this industry but as far as Iâ€™m concerned a great portfolio and a great graduate collection isnâ€™t enough. Nothingâ€™s enough in our industry, you have to go above and beyond, and you have to make it your life. Thatâ€™s pretty much what Iâ€™m trying to do. Live it and breathe it. No one takes you seriously unless you give it everything and itâ€™s a sad reality because it takes over every aspect of your life.

TCI:Â You spend so much time in the studio – what makes it all worth it?

IJ:Â Recognition I guess, people love it. I thrive off people recognising that I made that. People love seeing that you physically made that from start to finish, you designed it, you pattern made it, you made the fabric, and then wore it. I feel like people just find that so intriguing, they saw the whole process. Especially with fast fashion these days, you donâ€™t see where the clothes come from and even though itâ€™s so cheap, they still donâ€™t really want to pay. But if they see the whole process, theyâ€™re more connected to the garment and they want to pay for it. I guess Iâ€™m trying to bring some sentimental value to garments.

TCI:Â So youâ€™ve designed for some pretty big names, George Maple, Emma Shepherd, and Nicole Miller – how did you come into contact with them?

IJ:Â All of them did, they all contacted me personally. Jess (George Maple) messages me every couple of days, sending me inspo, like â€˜what are we doing next?â€™, Iâ€™m like, alright love calm down, one piece at a time! But sheâ€™s so into pushing Australian talent. I think theyâ€™re keen to make this unique look for themselves and again drawing back to sentimentality, people love it, youâ€™re collaborating, youâ€™re working together, itâ€™s personal. People thrive off it, I guess.

TCI:Â Whatâ€™s your favourite piece that youâ€™ve made so far?

IJ:Â I think it would be one for [my friendâ€™s party (pictured below)]. Itâ€™s weird because I would never want to wear that sort of style – but now Iâ€™m like “Well, maybe I should.” I was actually scared that I was going to get kicked out, because it was at a Brisbane club and they have really strict regulations. I got there and I just wore high-cut underwear underneath it and no bra, I was trying to get past with that. Guys who werenâ€™t in a suit jacket got pulled aside, and I was like, “Iâ€™m literally like naked right now!”. 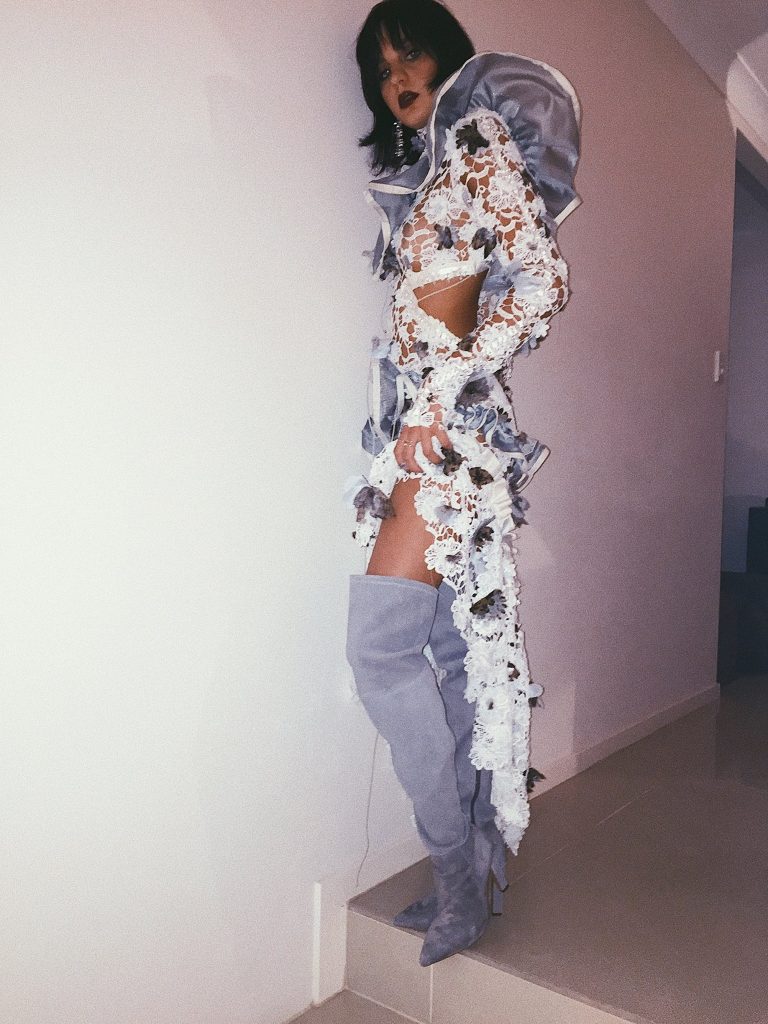 TCI:Â How has your work evolved since you started designing?

IJ:Â My work was really out there, I donâ€™t think I really knew what I was doing when I started. I think I found a way to channel that in a different way. At first I was trying to change the way that people perceive clothes but then I realised that thatâ€™s never going to change. People like comfort, and even I like comfort and I think I came to terms with that and accepted that you have to wear it and you have to keep wearing it. So I tried to channel that craziness in other ways, like material developments and more the styling side of it, but I think when I started it was just all over the shop, poorly put together, poorly sewn, I had no idea. But I think itâ€™s definitely more refined now and definitely more mature.

TCI:Â Is there anyone you would love to design for?

IJ:Â Oh yeah, I would love to obviously work for like Balenciaga and Gucci and Prada and all of them but yeah thatâ€™s going to be a road in itself so weâ€™ll see about that. I want to work for someone who I can play with big budgets and have fun [with]. I donâ€™t think Iâ€™m ready to do my own thing – people wouldnâ€™t be able to pay for the stuff that I want to do. And Iâ€™m not trying to say that in a bad way, itâ€™s just reality, it costs too much and I canâ€™t afford it. So I want to work for someone where I can play around with different ideas and it doesnâ€™t matter to them, because theyâ€™ve got the budget for it. 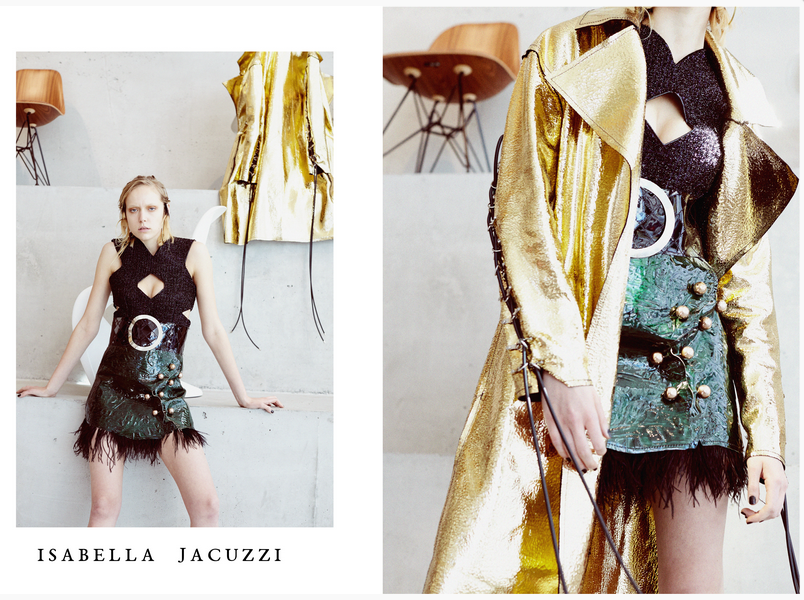 TCI:Â So what is your first priority when designing, is it comfort or just self-expression?

IJ:Â Yeah definitely self-expression. Comfort only kind of comes into it like – “Can I actually wear this?” And I think I learnt that the hard way, a lot of wasted material and a lot of wasted garments that I made when I was younger. They are just so poorly made. I made a couple of dresses out of vinyl and thereâ€™s just no way that I could wear them.

TCI:Â So your skills have evolved with your work?

IJ:Â Yep – it all goes together, it all has to evolve, you have to keep evolving to stay in fashion, and stay relevant and you know keep people watching you. if you stay the same, people donâ€™t like that, people want change.

TCI:Â You lived in Berlin for a bit – how does that compare to the Brisbane fashion industry?

IJ:Â Yeah I do, I think it’s definitely changing. I was talking about this with someone the other day, itâ€™s very bright here and thereâ€™s so much colour because itâ€™s always so sunny and weâ€™ve got so much greenery around. Itâ€™s a very liveable city and everyone is really happy so that draws positive vibes and positive colours, which subconsciously affects you when youâ€™re designing. I donâ€™t know how, it just happens. Berlin [is] such a dark city, itâ€™s very grungy and dirty and I think that drew a completely different side out of me.

TCI:Â So what got you into fashion – you said youâ€™d been doing it for ages?

IJ:Â I always wanted to be a designer. I remember the first sketch I did when I was five, when I first figured out how to draw a T-shirt on a body. I remember it so clearly, it was just like this moment, it was like â€œoh my god, Iâ€™ve figured it out, Iâ€™ve solved the world, watch me go now!â€. I woke up from a nap because I saw it in my head and just followed what I did in my head and it worked, I was mind blown! Iâ€™ve got sketches of little mini collections, theyâ€™re so funny, Iâ€™d even annotated how to style it, like â€˜black skirt, velvet bootsâ€™, itâ€™s so funny. But in school I donâ€™t think they really encourage that industry, especially going to a private girls school. I didnâ€™t do [fashion as a subject] because, (I mean, it might have changed now), but when I was there, it was looked down on. So I did art, and I was going pretty well and my teachers put me forward for this competition to go into GOMA. And then I ended up being one of thirty in Queensland chosen to exhibit. And then that moment I was like I think I should go into something creative and hands-on.

TCI:Â Where do you want to go with your career in fashion?

IJ:Â I have to finish a portfolio first of some kind, but hopefully overseas and if not, Sydney. I graduate in July so just kind of winging it I guess and trying to apply for jobs and get some connections. At the moment itâ€™s just a waiting game for me. Just trying to save as much as I can, working in retail and living at home. Got pushed into the garage with my studio because Mum and Dad are trying to get me out of the house. Theyâ€™re like â€˜I wonder if we put her sewing machine in the garage then sheâ€™ll eventually move outâ€™ – but yeah theyâ€™re really supportive of me!

TCI:Â Do you have any advice for other new young designers?

IJ:Â I think obviously, you have to put time into it and it doesnâ€™t just come like “that”. Youâ€™ve just got to be patient, super, super patient. I guess thatâ€™s it – it’s just time, patience, and determination. If you really want to do it, do it. But donâ€™t expect it to be easy because it’s not, itâ€™s not glamorous. When youâ€™re in the studio, itâ€™s really long hours and I guess thatâ€™s like any job, but I think it kind of gets overlooked a bit.

TCI: Where can people find you?Â

INTERVIEW: Bands Playing A Weekend At The Triffid