CD: How would you describe the Willow Beats sound?

Narayana: Nature inspires our music, something spiritual and ambient sounding. I like working with the sounds of water in particular and incorporating that into our tracks. Just in general we try to get our own samples.

CD: What bands or artists do people liken Willow Beats to?

Narayana: The most common one obviously is Flume just because he is an Australian producer and we are as well. I guess everyone always says â€œoh another band like Flumeâ€ but I wouldnâ€™t say we were particularly like him. I would say we were a little bit more like Purity Ring and we really like Mountkimbie, but I donâ€™t know if that comes through. Like everyone else we arenâ€™t trying to sound like anyone, but there is definitely dubstep influences in there. The half time laid back wonkey feel of dubstep but no growling bases or anything .

CD: How would you describe your live show?

Narayana: Basically Iâ€™m triggering loops which I can glitch up and kind of mix things together and throw some effects on them. Kalyani sings live and we also do a lot of vocal glitching. We also use drum pad where we can drum out and do vocal chops and things like that. I guess itâ€™s just us going nuts on stage as well and putting a lot of energy into our shows.

Narayana: Ah, I head bang quite a lot and we tend to jump up and down.

CD: Whatâ€™s the thought you want your audience to leave with after seeing a Willow Beats show?

Narayana: I feel like a Willowâ€™s show is kind of like a journey. We have a lot of variety in our music, which allows us to go heavy for a little bit and then move to something cruisey and beautiful and then maybe climb back up again. We want people to feel they went on that journey with us, that they were part of a story.

CD: What type of story will you be taking people on at your Alhambra Lounge show this week?

CD: Do you enjoy playing in Brisbane?

Narayana: Yeah we have played in Brisbane a fair few times before, and the Alhambra Lounge. They just put in a new stage, well I wouldnâ€™t say recently but within the last couple of months. Itâ€™s turned it into a really cool venue now. Now itâ€™s just perfect itâ€™s got a really big stage and a really great sound system. 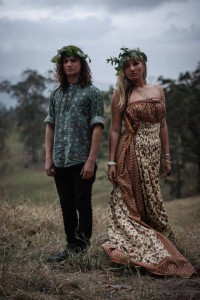 CD: So who is the main song writer out Kalyani and yourself?

Narayana: Well itâ€™s collaboration. Generally Kalyani writes the lyrics whenever she is singing, and she is singing all of the time. Sometimes she will play the piano write a song, then bring it to me and we will record it and I build the music around it.Â  But sometimes itâ€™s the other way where I will build a beat and she will come over and write a bit for that. Â I guess itâ€™s different for every song but we both write about the same amount.

CD: What your favourite of Willow Beats song?

Narayana: Personally I like Blue because I get to sing in it. Itâ€™s kind of a chilled out track and I also like Alchemy a lot.

CD: The term Queensland comes up quite a bit, any special reason?

Narayana: Ah actually it’s â€˜queens laughâ€™ like hahaha. I do think it sounds like queenâ€™s love but a lot of people do get it mixed up for Queensland and ask what we are singing about Queensland for. Â But we are originally from Murwillumbah, NSW which is close to the boarder so I guess it could make sense.

CD: Can you tell me about the history of Willow Beats?

Narayana: Well Kalyani is my niece, I was there when she was born so I guess I have been around her whole life.

CD: Would you say your whole family was quite musical then?

Narayana: Yeah well my dad wrote that song, â€œGive me a home amongst the gum trees.â€ So he was like a blues guitarist type of guy.

CD: What do you draw inspiration from?

Narayana: Well we were both born into a Hare Krishna community and I guess all our lives we have grown up with the Hare Krishna legends of magical weapons and demons and monsters. Different incarnations of god and all these amazing stories, so I guess I would say that was our biggest influence with those ties to the Indian culture.

CD: Are you and Kalyani working on anything at the moment?

Narayana: Yeah our next EP, hasnâ€™t be named yet but we are really stoked on it so far. Every EP we try and step it up and to take it to new levels. We definitely like the new songs more than our old stuff. We are stepping up in song writing and electronic music as well. We would like to get a bigger live show with some crazy visuals and stuff. Nature wise images like a time-lapse of plants growing, different underwater animals, jellyfish and stuff like that.

CD: Are you enjoying your current tour with Owl Eyes?

Narayana: This is our first tour together and we played two Tassie shows last weekend and those were the first gigs we had with her and it was very, very cool.