Kris Stewart’s online biography is both tersely written and quite lengthy, the sure sign of a high achiever (or career criminal). Luckily for the Brisbane Powerhouse, their new(ish) artistic director is very definitely the former.

He is also a theatrical polymath.

He kick-started the New York Music Theatre Festival in 2004 and steered it to the $100,000 Jujamcyn Theaters Prize just one year later.

I was lucky enough to catch up with Stewart over the phone. 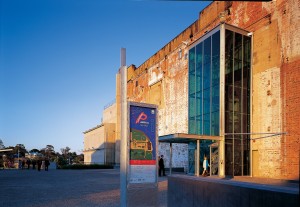 CD: Not many kids want to become artistic directors. Have you always been interested in arts management?

Kris: I went into college thinking I was going to be an actor, but just got offered more directing gigs than acting gigs â€“ and probably took that as a hint.

I like building things. There’s a version of my life where I’m managing a new sub-development on the Gold Coast, and I’m probably equally as happy.

CD: How did you get into major events?

Kris: There has been literally no strategy to my career. I’ve just wandered arse-backwards through life and tried to say yes more than I say no.

In the late ’90s there was a lot of major festivals in the lead up to the Olympics and the millennium. There was just a lot going on, and not an enormous range of people willing to put their hand up and say, â€œI don’t know what I’m talking about but I’m willing to take it on.â€

CD: How do you see the relationship between the Powerhouse and emerging artists?

Kris: We have a moral obligation to ask if we’re creating barriers of entry for artists to use these spaces. What can we do to break those?

It’s important that we stand for a pathway for Queensland artists. There needs to be a strategy for this instead of just thinking show-to-show, person-to-person.

CD: What does that mean specifically?

Kris: We have a reasonable luxury of having a number of spaces, some of which during the year aren’t activated for performance. What’s stopping us making that space available 100 nights each year for as close to zero cost as we can?

CD: Any chance of cheaper beer at the Powerhouse?

Kris: Somewhat embarrassingly, one of the first things I wanted to change when I started this job was making it easier for people to have a bloody beer.

I’ve never had a night at the theatre that wouldn’t have been improved by a drink in my hand.

We want the Powerhouse to be a social environment. I don’t ever want cost to be the reason people don’t do things here, whether it’s the cost of beer or the cost of renting a theatre.

The Brazilian BBQ feast that is Mundo Churrasco

App of the month – Facetune