Brisbane’s buzzing for Prize Fighter to hit La Boite on September 5 as a part of the Brisbane Festival – we spoke to actor Thuso Lekwape about what the show means to him.

Early though the morning is when we meet for coffee, Thuso’s beaming and full of energy. It’s hard to tell that he, and the rest of the cast, have been undergoing gruelling physical training to live out the stories of professional boxers at La Boite’s Roundhouse on September 4. I’m eager to know more, and he fills me in over a chat on what we can expect from the show.

“One thing that attracted me to this play was the physicality, because I’m a physical character myself,” says Tsuso on his choice to audition for Prize Fighter straight out of graduating from Sydney’s world-renowned dramatic arts institute NIDA.

Prize Fighter follows  former Congolese child soldier Isa (fellow NIDA graduate Pacharo Mzembe) on his path to boxing greatness, while coming to terms with his violent past – written by La Boite Artist-in-Residence Future D. Fidel, himself a former Tanzanian refugee. Thuso couldn’t believe his luck when he had the opportunity to audition for the role of a boxer, and was also excited to tell the stories of his home continent, and the people he grew up around. 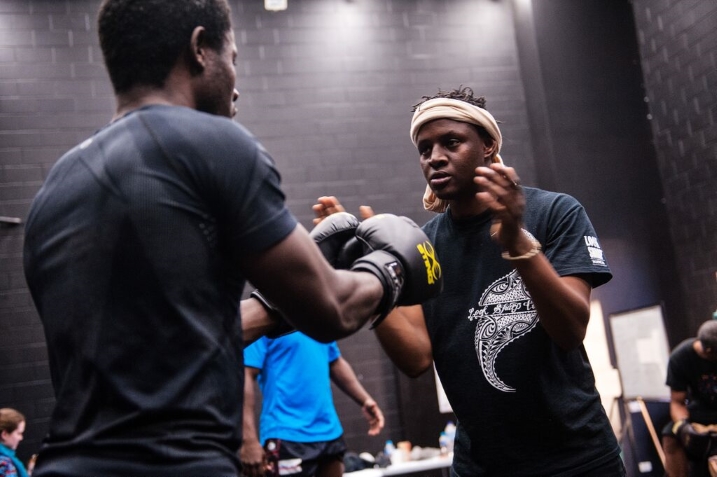 Thuso was born in Johannesburg into relative poverty, and later came to Australia to study acting, funded and supported by Australian journalists Sharon Davis and Geoff Parish. He still maintains a strong connection with his homeland, returning at least once a year to see his family.  “It’s the first play I’ve read from my continent, because I’m South African originally. I grew up around Congolese and Nigerians and this story felt really important for me to be a be a part of.”

“People train for years to get ready for one fight – and we’ve got one month to put up a play and get to that physical level – it’s about the passion.”

Thuso also currently puts his seemingly boundless energy and charisma to work as host of children’s television program Imagination Train. With upcoming roles in a handful of projects, including feature horror film 2:22 and television drama The Principal, Thuso’s passion in acting that unites all of these projects is creating characters.

He speaks of his character in Prize Fighter: “I think he’s a tortured soul, in a sense. He’s a child soldier who pretty much follows the same story that a lot of these children who have come from the Congo have – the thing that I think is going to be hard is the idea of being so young and innocent but at the same time willing to just kill. As an actor myself, I have to find that within I come from a very comfortable place, – you need to be to able to understand the psychology of it.”

On finding work straight out of NIDA, he spoke confidently. “It is scary because when you’re straight out of training, you feel you have to impress people – because you’re so eager after three years of training, like in every profession, you’re willing to go there and meet it. It is a bit scary, but it’s a good thing because it’s hard to find work at times.” Though working constantly and meeting people is key to getting started as a young actor, he says NIDA played a vital role in preparing him for productions like Prize Fighter as well. “For what I want to achieve and to have the technique to explore characters – NIDA gives you that palette of colours.”

He grins when I ask him what he thinks about networking, the do-or-die in the life of every creative on the rise. “It’s all about experience and meeting people. I’m slowly getting in to it. I like it, but I don’t like the term networking – I do it without knowing that I’m doing it. I find people very interesting and I think it’s important just to be friendly.” 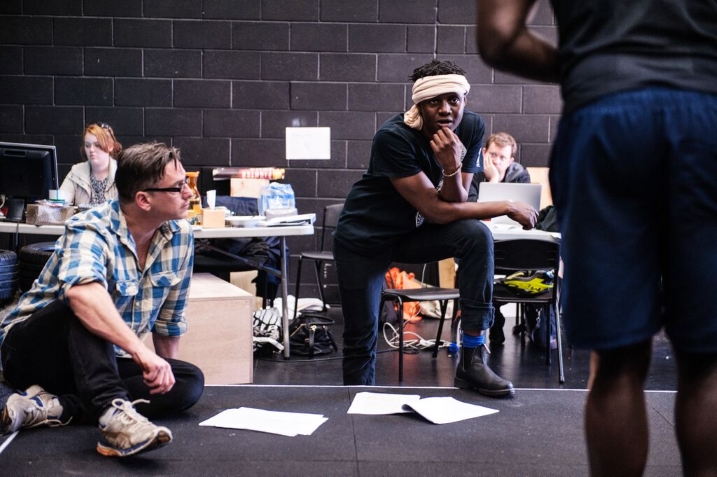 Gideon Mzembe, another actor in the show, passes by midway through our interview, and they exchange playful banter for several minutes (“Did you pay for that coffee?”) – the feeling in the air is definitely of bottled energy, and of athletes limbering up for competition, even while still in the rehearsal stage.

Thuso is optimistic about Prize Fighter’s debut and future prospects, pending the availability of so many talented young actors down the line. “Our director Todd is a blessing- I learn so much from him every day. Everyone has their own taste of what they want expect it to be – this crosses so many levels, from performative to physical theatre. There’s so much truth under a lot of this. It’s shocking, but at the same time, freeing.”

“When you read the greats, they’re writing about their society and their time and right now what Future D has gone and done is wrote about the Congo and their situation but specifically what kids are going through – he’s put that life into a young man who wants to find something.”

Once he recovers from Prize Fighter, Thuso seems set for roles in the immediate future, but he admits his sights could be poised – one day – on playing one of his greatest heroes from his homeland onscreen.

“Right now my dream role has been played, but I think once I mature, I can replay this role – and that’s Nelson Mandela. It’s my background, it’s where I come from – he’s been my hero (besides Sharon and Geoff). I’d really like to put myself in his shoes and understand his psychology and how he was able to make the decisions he made – I heard Morgan Freeman was even hesitant to take it on – but that’s a dream role, a role that scares you.”

“There’s another character that hasn’t been written and he goes by the name of Oliver Tambo -he was one of the forgotten heroes. In apartheid there was some people who were fighting for the struggle that never really got to see the end of it, he’s one of those people he’s like Steve Beaker in a way.”

He expresses an eagerness to begin writing these stories himself one day, partially inspired by his work on Prize Fighter.

“It asks the question of us – why did these big, great sportsmen willing to go into this ring and throw punches at one another? There has to be so much drive and belief behind it, and you get to explore that too. I get to speak in a different language – when I grew up, all around me there were different languages, and I didn’t even think about it. To come here and then be presented with that play – it’s a great experience. Brisbane is lucky to have a play like this as a part of this festival.”