For the past 15 years the Melbourne Underground Film Festival has run parallel to the government funded MIFF, screening their fill of local independent film talent. We had a chat with director and founder Richard Wolstencroft to see whatâ€™s on in this yearâ€™s festival.

CD: So Richard, youâ€™re only a few weeks out from the festival now, how have you been keeping busy?

Things are going really well! Everythingâ€™s been coming together. I was overseas a bit in July organising a feature film shot in England called The Second Coming starring Pete Doherty from the Libertines and a number of other underground celebrities. So thatâ€™s been keeping me pretty busy.

And then I was in Los Angeles having an interview about a feature film I could be doing over there, so I have my own film career thatâ€™s been running parallel to the festival.

CD: Youâ€™re both the director and the founder for the Melbourne Underground Film Festival, how did it first start? 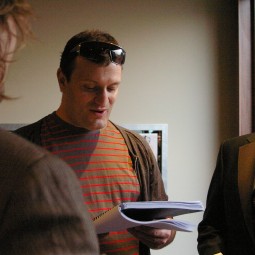 It started because I was unhappy with the state of affairs in the local film industry. I made a film called Pearls Before Swine that was sent into the Melbourne International Film Festival (MIFF) but got rejected from there.

It played overseas at a number of international film festivals, and I was like, ‘why the hell canâ€™t it play at a local film festival?’ It was shot in Melbourne and had a highly Australian cast.

So I write this outraged letter to an online film magazine and received a barrage of emails from other independent filmmakers like James Wan (Saw, The Conjuring) who they wouldnâ€™t play at MIFF, as well as LGBT and Science Fiction filmmakers; all these people out there that wanted to show their stuff. It all sounded very exciting.

CD: So it started very much as a criticism of the local film industry. Has your goal or purpose changed since then?

Well I think itâ€™s definitely always had a critique of the local industry and the kind of films that get funded and played at MIFF, but thatâ€™s not all we are about. We provide another, much needed avenue in that area of cinema.

Filmmakers have these $5-10k up to $100k micro-budget features, and they donâ€™t often get played at all the major film festivals. Weâ€™re all about aggressive and exciting genre cinema thatâ€™s a bit edgy and a bit different.

CD: Do you see MUFF as a success in that regard?

Weâ€™ve played heaps of people who have gone on to have really incredible careers.

Recently Patrick Hughes directed the new Expendables 3; we played all his earlier films at MUFF. We played the early films of Greg McQueen who did the Wolf Creek films. James Wan, the Spierig Brothers, we played all their early shorts. This has been our mandate, to discover all this new talent, and weâ€™ve found a way to do it somehow.

I think this year we will continue to discover new talent. People like Stewart Simpson who made the film Chocolate, Strawberry, Vanilla which is on closing night, and Chris Mitchell who has the opening film Start, Options, Exit, two filmmakers who will probably be crossing over into mainstream Hollywood in the next 5 years Iâ€™d say.

CD: Whatâ€™s special about this yearâ€™s festival? Your theme this year is Evolve or Die. Where did that come from?

Well we did a whole â€œdeath of filmâ€ thing a few years ago, with cinemas like the Astor closing down, chances to see actual film on film are really dwindling.

The whole landscape of what used to be called â€˜moviesâ€™ and â€˜filmâ€™ has really changed. Itâ€™s all video projected now. Thereâ€™s a paradigm change, and with the internet and people downloading films the economic model is under threat. So now is the time to evolve or die, basically.

Itâ€™s an exciting time, equally as important as the birth of cinema, and we are going to see a drastic change in what films are produced and how they are produced in the next 15-20 years.

CD: What films are you most excited about presenting this year?

Obviously Iâ€™m very excited about our opening and closing night films I told you about, but Iâ€™m really excited about a film called The Suicide Theory directed by Dru Brown from Brisbane, itâ€™s really awesome. As well as a film from Italy called The Naked Rose by Giovanni Coda who is trying to get out here for the festival. Itâ€™s a really fascinating and amazing piece of international cinema.

Plus thereâ€™s all the films in Mini MUFF. Mini MUFF is basically the anti-Tropfest, with everything a bit too risquÃ© or crazy and over-the-top for Tropfest. Hussein Khoder is our shorts programmer and heâ€™s put together five shorts of really amazing films over five days, itâ€™s definitely worth checking out as well.

CD: On that note, why do you choose not to back down from films normally considered too offensive or repulsive for the general audience, such as L.A Zombie?

I have always taken a very strong anti-censorship position. I think any film that is made legally deserves to be played. I support freedom of speech.

So when the film L.A Zombie was banned, I really disagreed with that. So we organised a little illegal screening as a sort of protest, which we got into some trouble for a few years ago. Iâ€™m not entirely sure Iâ€™d defy the censor in that way again, but it was an interesting protest in support of free speech.

CD: What can we expect in the future for the Melbourne Underground Film Festival?

Well we are doing a really interesting side-bar event at this yearâ€™s Earthcore. We are doing a thing called the Muffplex which is going to be like a 3-day cinema marathon.

It will be like a chillout area for once youâ€™re sick of dancing your ass off and listening to DJâ€™s you can just sit down and relax. We have films from classic cinema, cult cinema, and a selection of the best of MUFF. The program for that will be up before the festival in late November.

After that we will be thinking about MUFF 16 if we are crazy enough. Every year I do it I say â€œIâ€™m never doing it again!â€ and yet here I am.

The Joy Of Melancholia