Sam Perry Reflects On Life After "The Voice"

I got to catch up with Sam Perry, who has gone from reality TV winner to touring artist. He’s embarking on a national tour starting in Melbourne in November.

The Creative Issue: Sam, you’re already a seasoned performer, but much newer to playing and singing by yourself. What is the biggest difference and hardest challenge when it comes to making the sound all by yourself, as opposed to having other people performing with you?

Sam Perry: It can be a lonely road. I have a real love hate relationship with my loop pedal. Performing onstage can be exhausting as all eyes are on me constantly, so it’s so important to keep my energy up and engage with the audience throughout the whole performance. But off stage, I have a solid team of people around me helping in all areas. So I’m only by myself half the time.

TCI: Your tour starts mid-November. What kind of act have we got to look forward to?

S: Yes! I can’t wait to get touring around Australia. My live show is constantly evolving but you can absolutely expect some big beatbox and phat basslines in a 100% vocal performance.

TCI: What parts of the tour are YOU most excited about?

S: I’ve never toured as a solo artist before so it’s a real achievement for me. But there is no better feeling than having a whole room moving to your energy. It’s all about that connection.

TCI: You’re running a competition for new artists to support you on your tour. What are you looking for in a support act?

S: The main point of the competition is to find artists we wouldn’t normally find and put them in the spotlight. Giving the little guy a go, because I am still the little guy too! There are no rules to it really. I love out of the box thinking and good showmanship – on and off stage. 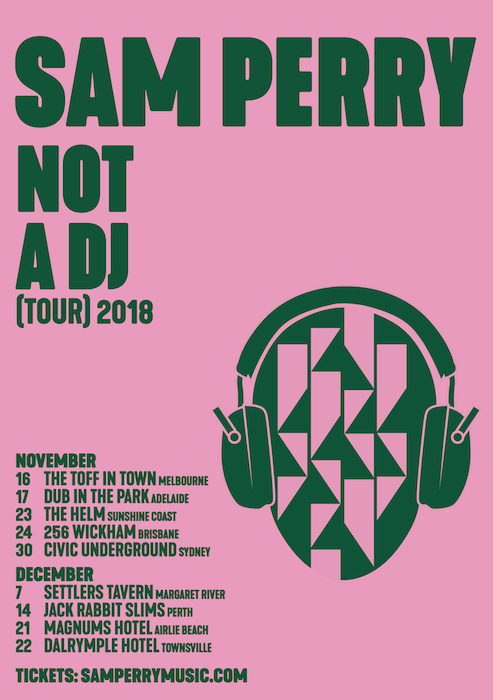 TCI: What excites you the most about up-and-coming artists? How do you think growing up in a small town has affected the way that you perceive the world, personally and musically?

S: I see all artists as up-and-coming – myself included. Some are just more well known than others. Growing up in Perth, I’m so used to hearing about how ‘crap’ the nightlife is. But being heavily involved in the underground music scene for years, it’s just not true. You just need to know where to look. I find that whole underground/up-and-coming movement super exciting, because it’s so real. Young artists create purely because they want to. Not because they have to.

I’ve also been lucky enough to leave the smaller scene and tour internationally for five years of my life. Going into countries that don’t speak any English but still being able to connect on a musical level is a real eye opener. You start to see music as its own language.

TCI: What advice would you give to people who are also looking at getting into looping?

S: I think looping is great for understanding and writing music. It’s a common tool for guitarists/keys/producers to use. Vocal looping is a little different, especially if you are interested in designing your own effects to work with your voice to be a one man band. You have to be focused and commit a lot of time and energy to be great at anything! It can be an incredibly frustrating process but if it was easy, everyone would do it. My advice would be to start small, but aim big! And know that hard work will absolutely pay off!

TCI: What about musicians looking to apply for reality shows like The Voice?

S: I understand shows like this are not for everyone. And it’s easy to come to a conclusion that it’s staged. It’s no secret I had hardly watched an episode of previous seasons (or any TV really). Honestly, I went into it closed off and reluctant but I was totally wrong! My experience was nothing but eye opening, terrifying, challenging, exciting and fun. And it was 100% real. The producers of the show really care about the artists and do everything they can help us grow as performers.

I’ve gone from working a full time job and squeezing in music on the weekends, to being a full time musician traveling the country and playing shows to people that love music just as much as I do. I’m now signed to Universal Music and the support has been unreal. I can now get the right help with songwriting/production/recording and I have learnt more in the last five months than I have in the years before. The future is exciting and I’m proud of what I have achieved.

‘NOT A DJ’ SUPPORT COMPETITION:
To be involved, send a demo (SoundCloud or private download link), bio and photo to:
info@michaelparisimgmt.com

A Coupla Dogs: Every Dog Has Their Day