After a triumphant run in New York, The Australian Voicesâ€™ new work Boombox is coming home. We caught up with co-director/creator and performer Samuel Boyd to talk about the choirâ€™s latest genre-bending masterpiece.

If youâ€™ve been to the theatre this year, youâ€™ve probably encountered The Australian Voices. Theyâ€™ve collaborated with everyone from La Boite to the Queensland Symphony Orchestra to Topology, and travelled from Mount Isa to New York sharing their particular blend of soaring vocals and plugged-in pop culture. Boombox, however, is quite unlike anything theyâ€™ve done before. Blurring the lines between choir and theatre, tradition and technology, the show incorporates rap battles, political speeches and a touch of the theatrical, in sixty minutes of non-stop vocal extravaganza.

When I sit down with cast member Sam Boyd, he has just returned from bringing the show to the Americans (who, as it transpires, liked it very much). Itâ€™s a crowning achievement for a production that has already spent a year evolving and touring around Australia. â€œItâ€™s been crazy,â€ Sam says. â€œItâ€™s been a really big joy though, going around to each different city and seeing how people react to it, seeing what people like about it and what they donâ€™t like about itâ€”which is nothing, because itâ€™s perfect,â€ he laughs. â€œItâ€™s been a long, but very rewarding process.â€ 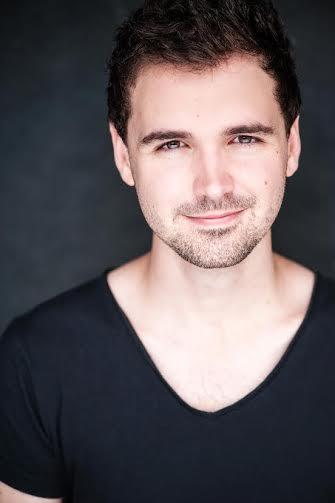 â€˜Crazyâ€™ certainly seems the right word for a show that walks the musical tightrope the way Boombox does. From its earliest days, the idea was a little bit mad. The first spark came from The Australian Voicesâ€™ artistic director, Gordon Hamilton. Â â€œHe came to me and said, â€˜Letâ€™s do a show that has a thousand things that have nothing to do with each other!â€™â€ Sam says. â€œAnd I was like, â€˜Great, thatâ€™s not going to work.â€™â€

From here, Sam says, he suggested implementing a through line, which became the productionâ€™s titular boombox. â€œWeâ€™ve got an actual boombox which kind of ties it all together. So someone will walk on stage and press play on the boombox and a sound will come out which will be the starting note for the next song. One songâ€”we play the worldâ€™s first rap battle (thatâ€™s been recorded) and then we kind of jump in and start annotating what theyâ€™re singing and saying and it becomes a song, and that leads into a dissection of a classical work.â€

Our conversation is full of these promising glimpses into the rich musical patchwork of the show. When I ask how such a kaleidoscope of fragments was first assembled, the answer only creates more curiosity. â€œGordon and I started by just writing ideas down of everything you wouldnâ€™t see in a classical concert, so original drafts were just like: â€˜people saying random words which change into other wordsâ€™ or â€˜an ancient kind of Bulgarian sound which then transforms into a little cute song about baby sharksâ€™ or speech rhythms, which kind of reinterprets [themselves], or grunts which then turn into a song, just things you would never expect.â€ 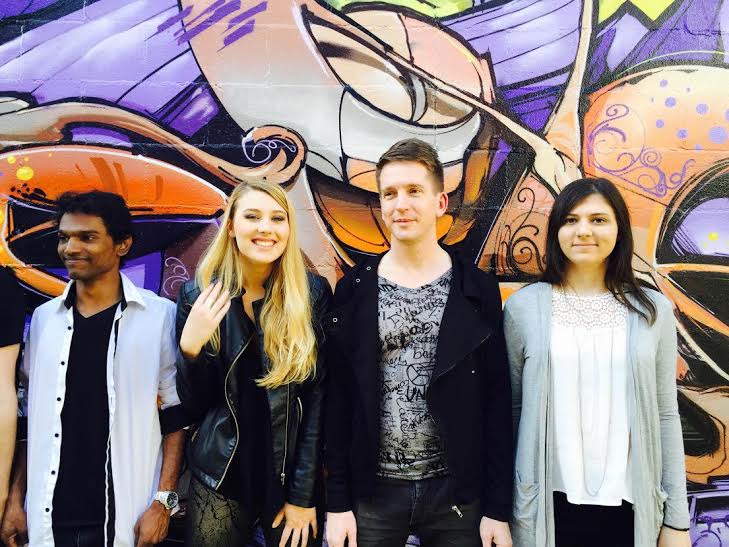 Despite the extreme eclecticism of the show, Sam assures me thereâ€™s a lot of method behind the madness, and a lot of hard work has gone into making it a coherent whole. â€œAs random as it seems, a lot of massaging and finessing has to go into it in terms of the pacing of the piece, because youâ€™ll find at the start of the show that thereâ€™s a bunch of different ideas, thereâ€™s a bunch of really cool things and experiments, and then as we progress it becomes a bit more focussed on melody and the techniques of singing.â€

Rap battles, political speeches and baby sharks may seem strange fare for a choral group, but The Australian Voices are no strangers to pushing boundaries. Since Gordon Hamilton took over as Artistic Director, the group are becoming known for their creative fusion as much as their choral skills, with a string of viral YouTube hits and collaborative concerts. Earlier this year they joined forces with speech rhythm maestro Robert Davidson of Topology. â€œWe worked with him on a few Prime Ministerial speeches, which turned into another concert called Unrepresentative Swill, which we did in July.â€ From here, Sam tells me, the partnership brought the idea of more text songs into The Australian Voicesâ€™ work, transforming a new range of speeches and recordings. â€œRegardless of whoâ€™s speaking or what theyâ€™re saying, every word has a pitch and every word has a rhythm, so in theory you could take this conversation that weâ€™re having and notate an opera around it.â€

Itâ€™s definitely my first time as a potential opera subject, and Iâ€™m half tempted to press the offer. More importantly, though, this collaboration led to several of the songs featured in Boombox, including audience favourite, â€˜Not Now, Not Everâ€™ (the Gillard misogyny speech) and a new work written for New York, â€˜Total Political Correctnessâ€™, which is possibly the worldâ€™s only choral arrangement to feature Donald Trump. 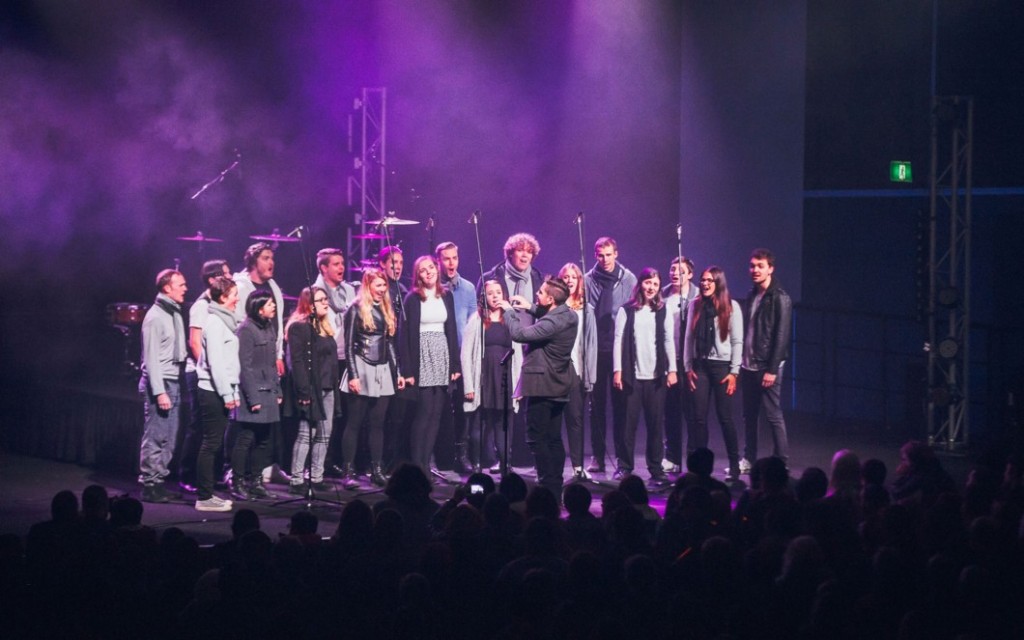 The choirâ€™s seamless combination of pop culture and classical sounds not only has the ability to make Tony Abbott sound good, but itâ€™s putting The Australian Voices on the cutting edge of choral music, bringing more and more people to their work. Is it also necessary for the survival of a choral choir in todayâ€™s cultural landscape? In a smaller Australian scene, Sam says probably yes. â€œI always think thereâ€™s going to be a place for choral music, but in terms of reaching a wider mediumâ€”we can still do the choral music, but it kind of helps to have that extra kick, you know? Weâ€™ve posted a classical song on Facebook and itâ€™s like â€˜Great, we got two thousand likes,â€™ and they we posted a song called â€˜Baby Sharkâ€™, which got over two hundred thousand likes.â€ (As this is the third mention of the mysterious Baby Shark song, it seems only fair to offer a link.)

However, even with such a bold history behind them, Boombox is still an innovation for the choir. â€œThe new work is ground-breaking in the sense that the spontaneity and the reaction and the ideas behind it, you wouldnâ€™t see anywhere elseâ€¦.nowhere else has done [this] yet and so I think itâ€™s really, really exciting.â€ 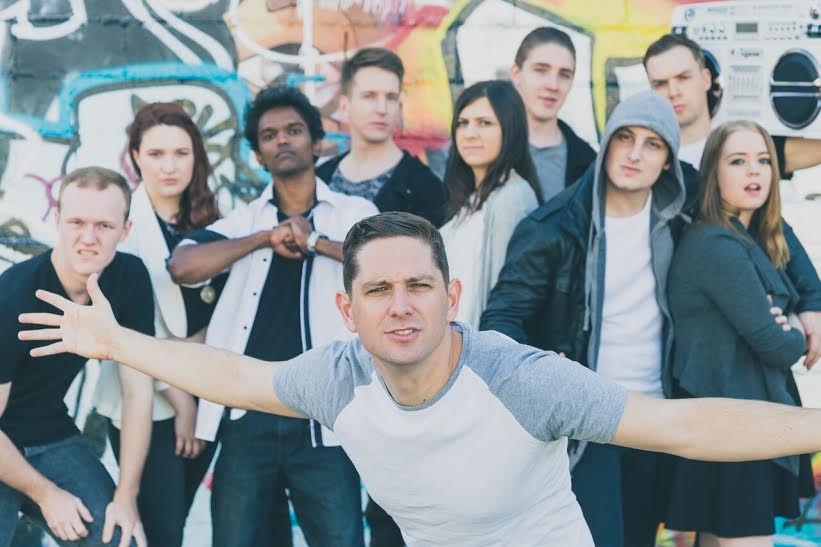 We fall to talking about Samâ€™s other life as a sound designer and compare his usual work on shows like La Boiteâ€™s Pale Blue Dot to the kind of technical elements supporting Boombox. While the show is pitched as the ultimate skirmish between the human voice and machine, it seems the more technical aspects take a slight backseat hereâ€”â€œbecause the amazing thing about the show is what we can do with our voices.â€ When I ask if this means the human voice comes out the winner, Sam hesitates before calling a tie. He does, however, quickly add, â€œbut of course the voice wins because the boombox doesnâ€™t have any power without voices.â€

It seems the only way to know for sure is to get down to the show. With Boombox preparing to head to Adelaide Festival next year and then possibly to a return season in New York, this could be a rare chance to catch this internationally acclaimed production, and self-proclaimed travesty of classical music, in Brisbaneâ€”so donâ€™t miss out!

For more information or tickets head to the Powerhouseâ€™s website here.

Get the look: The Romantic

Review: Sleeping with Other People