San Cisco have an action-packed year coming up, with the recent release of their album -Â The Water –Â a national tour, an appearance at Byron Bay’s Splendour in the Grass, and a North American tour lined up.

They’ve come a long way since their first hit, ‘Awkward’.Â The Creative Issue hadÂ a chat with San Cisco’s lead singer, Jordi Davieson, about the band’sÂ preparation for theÂ year ahead.

TCI: First of all, congratulations on the release of The Water and the new tour!

TCI: Howâ€™re you feeling in the lead up to The WaterÂ national tour?

Jordi: Pretty good, weâ€™ve just been rehearsing a lot. I’ll feel a lot better once weâ€™ve done our first few shows, it’s just a lot to remember. Once I remember it for one set it’ll beÂ good.

TCI: San Cisco has obviously done a lot of growing up since your first release, how does it feel to have accomplished so much overÂ the past couple ofÂ years?

TCI: Weâ€™ve come to expect a bit of a different sound from every San Cisco release. What do you think prompts the variety you have every time?

Jordi:Â We get bored if we do the same thing. Like if weâ€™re writing a song and someone says, â€œyeah but guys this is kind of sounding like this one that weâ€™ve already got,â€ weâ€™ll flip it on its head and do something else. It’s a bit boring to do the same thing again and again.

Â TCI: Â You are set to hit the Splendour in the Grass stage again in July, how does preparing for this yearâ€™s festival compare to your past times?Â

Jordi:Â Pretty excited. We were really hoping to get it and we did, which was great news. It’s such a fun festival to be a part of and I love Byron Bay.

TCI: Weâ€™ve heard San Cisco talk about how you’ve got yourÂ older hit songs like ‘Awkward’ and ‘Fred Astaire’ and how it could be boring for you to play them over and over again but it changes the experience when the crowd gets so into it. How do you anticipate performing the new album, with a shorter time after the release will go?

Jordi:Â I donâ€™t know, thatâ€™s the most exciting thing about it, we’ll see. Iâ€™m really looking forward to seeing how people have received it and how they react to certain songs, and all that. Youâ€™re right, they havenâ€™t had much time to learn the songs before we come and play them, but hopefully theyâ€™ve had a bit of a listen. 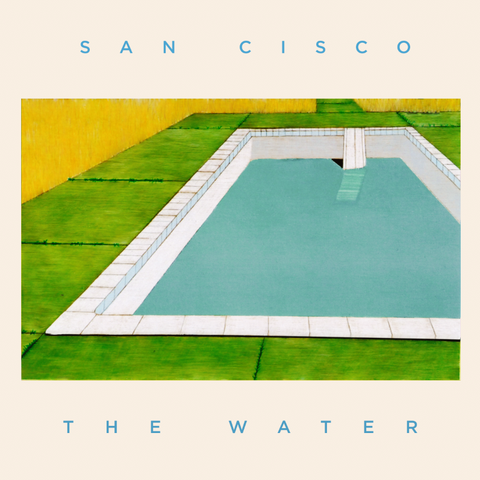 TCI: You seem to have a pretty great friendship with Thelma Plum, whoâ€™ll be joining you on the national tour. How has the experience been working with her at events like Triple Jâ€™s one night stand?

Jordi:Â Good, great fun. Sheâ€™s lovely to be around. Everyone loves her, she knows lots of people and you get to meet a lot of people.Â  Itâ€™ll be really cool to have her. Sheâ€™s done a lot of touring, so itâ€™ll be great to have her on the road and hopefully we’ll be able to link up with a few new faces.

TCI: I imagine there’s more and more lists of people to network with, every time you are out and about.

Jordi:Â Yeah, not so much networking, just having a chat, someone to have fun with. You get to a city and can send someone a message â€œIâ€™m in town, want to do something?â€. It’s always good to have those people in your contacts.

Jordi:Â Absolutely. One new person in the group really changes the dynamic in the group. Itâ€™s a big help. It’s just the four of us all the time.

TCI: It must take a lot of trust in another artist to lock them in for such a huge amount of shows. Sheâ€™s obviously impressed you enough to have that faith in her.Â

Jordi: Yeah, sheâ€™s not doing all the shows, sheâ€™s doing most of them. Then there’s some other bands supporting us on some other shows. When we pick a support band, weâ€™ve got to like their music and like them. Scarlettâ€™s really good friends with her, weâ€™re all friends with her, but Scarlett is really good friends with her, and also itâ€™s just great to have more female support acts. There’s not enough chicks getting enough shows. That’s another thing that I like, getting female support acts because there’s so many amazing female acts out there. 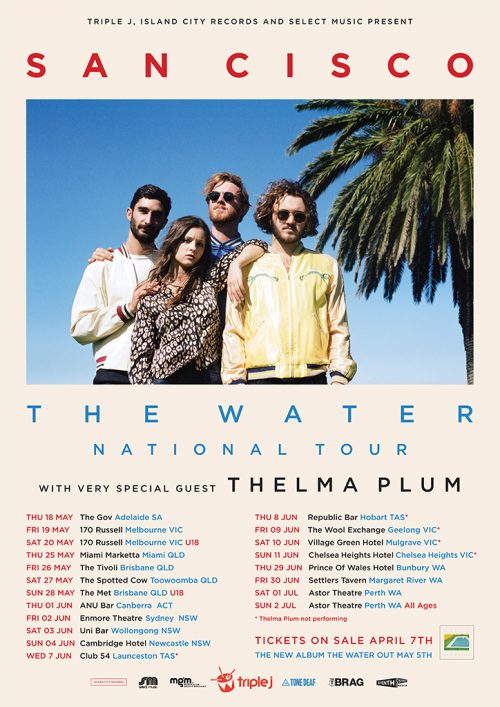 TCI: Youâ€™ve now got international performances under your belt, and youâ€™ll be adding more at the end of this year. How does touring in your home country compare to places like the US?

Jordi:Â It’s quite different, because in Australia, we’re obviously quiteÂ a bit more successful. Weâ€™re playing bigger shows and we have more crew on the road, and it’s a bit more of an easy touring experience. In America, we’re kind of slogging it. Weâ€™ve got lots of six, seven hour drives every day and what we have to do is a lot more hands on and the venues are smaller. But itâ€™s good, itâ€™s humbling. Itâ€™s good for us to have, I reckon. It’s good for everyone. You canâ€™t forget that Australiaâ€™s a small place.

TCI: Should we be expecting the classic San Cisco vibe from the new shows this year, or are you guys shaking it up a bit? What’s going to be happening?

Jordi:Â I donâ€™t know. I think thereâ€™s not too much difference, except I think we just put a lot more time into getting a really good sound and getting it really tight and yeah, just put a lot of thought into how to translate these songs to a live show.

TCI: Does that take a lot of effort?

Jordi:Â Yeah, it’s a big challenge, but there’sÂ not going to be too much of a change, like we’re not wearing costumes or anything.

TCI: Do you have any advice for musicians who are just starting out in the Australian music scene and looking up to bands like San Cisco?

Jordi:Â I think youâ€™ve just got to play lots of shows. Youâ€™ve got to find your band and play a lot. Play a lot of shitty live shows and then work your way up like that, that’s the key. Often, we see bands theyâ€™ve got that one, two really good songs but the rest of their catalogue is a little bit weak. The way that they play, like, interact with each other on stage and how they play their instruments isnâ€™t actually that great and then youâ€™ll see a band thatâ€™s obviously been playing together for a long time and doneÂ a lot of shows and they put on a great live show. They know how to play their instruments, they know how to command an audience and there’s a big difference in that.

TCI: How was that for you? It’s obviously been quite a few years, but you started out playing solo shows and then you guys pieced together San Cisco. How was it for you going through that process, becoming a band that could perform really well together?

Jordi:Â We didnâ€™t really think about it much at the time, but we played a lot of shows to no one and Â a lot of shows to either nobody, or just a few people. I used to do a lot of busking, which I think helped a lot, just with being comfortable with singing and projecting your voice to a crowd or people who arenâ€™t really watching. I think that was quite a big thing. I noticed the other day when I was jamming with a few people, how much I take for granted the connection Josh, Scarlett, Nick and I have when we play together. We were in the rehearsal studio, we started jamming, started a song and we all just kind of know where weâ€™re at and when we’re going to move into each section and where we want it to all go. Because weâ€™ve played that many songs together. Unfortunately, recently we havenâ€™t been jamming much together, because it’s been record, rehearsals, releasing, we havenâ€™t had that much time to just hang out in a room and play music. I think it definitely comes through in the way that we play with each other that we have actually got a couple of hours under our belt of playing music together.

TCI: Do you have any highlights for the national and international tour that you are really looking forward to, or places?

TCI: Do you think the trip will be good for inspiring your next lot of music writing?

Jordi:Â Yeah, Iâ€™m hoping so. Iâ€™m actually hoping to writeÂ  quite a bit of music on this tour. Itâ€™ll be the first time we’re going to have an acoustic guitar on the road so that should help a little bit. Yeah I’m looking forward to that.

TCI: Well Jordi thank you for speaking with us, and good luck with the tour, weâ€™re very excited to watch you in Brisbane!

Jordi:Â Too easy, yeah it should be good!

More Info:Â Please note: San Cisco’s performance at The Tivoli is an 18+ event.

Observations: An Interview with Bernard Ollis