Young and energetic as ever, West End favouritesÂ The Mouldy LoversÂ are back with a new albumÂ destined to reinvigorate the Brisbane music scene.

If you’ve never been to a Mouldy Lovers gigÂ before, the simplest way to describe it would have to be ska-punk, sweaty gyrating and a lot of horns (a perfect combination).

Last Saturday at a fundraiserÂ for the Leard State Forest blockade, the Mouldies transformedÂ Turnstyle’sÂ modestÂ basement into a space, thumping with raw energy and ska, testing the room’sÂ very limits. Â With their group numbersÂ constantly in flux, it’s amazing to see how so many different people can move together so seemingly like one large musical organ, all intuitively in tune with each other and while having the time of their lives.

Creative Drinks: What were your main influences for yourÂ new album,Â Mondegreen?

Gavin:Â The sound is allot more ska than our previous work. Itâ€™s almost like, I think that it sounds a lot like Reel Big Fish and those types of bands but I donâ€™t think we actually even listen to those bands very much.

Matt: I listen to a lot of traditional, like Klezmer and a sort of broad category of like gypsy music, even though that term is not too great. Everyone listens to different stuff and they bring it all in and it just comes together in this broth of whatever it is now.

CD: If you could describe the album’s sound, what would it be?

Gavin:Â This album became a lot darker than the last one, like thematically. Lyric wise it’s a bit angrier and the music is a bit heavier, so maybe that informed the lyrical content. It depends on what you’re listening to as well I guess, like I was listening to a lot of Australian bands like Nick Cave, Smith Street Band and old British bands like The Libertines – guitar bands who’ve got a bit of bite. Poetically it was influenced as well, reading a lot of William Blake and Pablo Neruda. Thinking about the big themes of life and death, heaven and hell, love, spirituality, consumerism and politics. 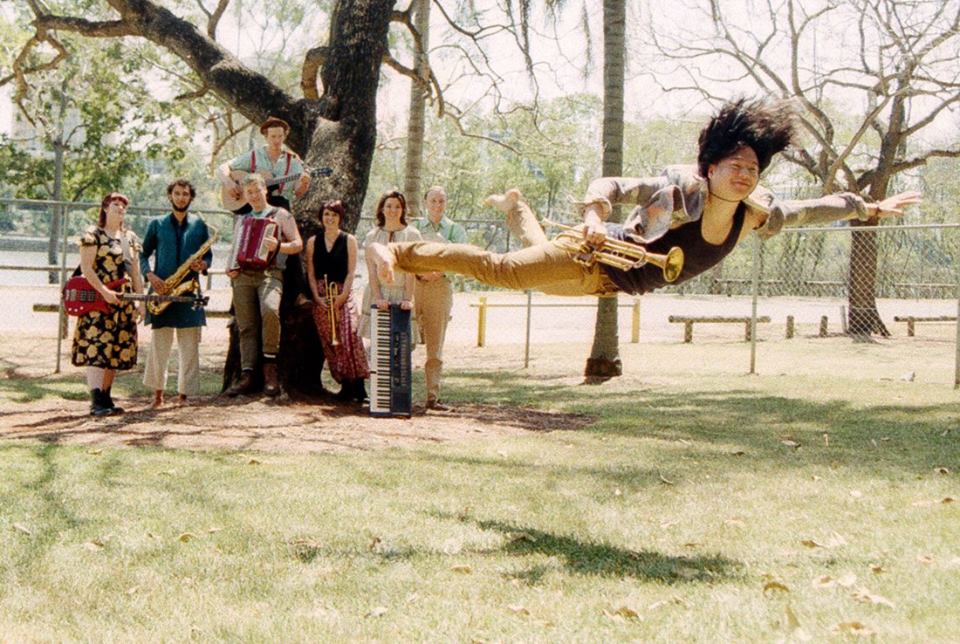 CD: What’s been your most memorable show so far?

Matt: I’ve got one for sure. We just did an album launch for Mondegreen and we had most of our [17] previous band members in the audience. For the last two songs we got them all up so we had 12 people on stage and it was madness but beautiful madness.

Caroline: I love gigs just like tonight, where everybodyâ€™s dancing and sweaty.

Jonathan: I think my most memorable one was the first one I played. It was just in this laundromat. I met these guys and they were like ‘you should come along to a rehearsal’ and I saidÂ okay cool. So we lock in the date for a rehearsal and like six hours later they call back and theyâ€™re like ‘actually can you come and play tomorrow at this place?â€™ and I was like, â€˜but I havenâ€™t learned any of the songs!â€™ and they said it didn’t matter. Then we played at the laundromat, it was wild.

Gavin: Yeah that’s kind of how the band rolls. We play pretty much anywhere. We’ve played in the rain, I remember I had just bought a new amp and we went to play at the AYCC (The Australian Youth Climate Coalition) protest in Victoria Square. We ended up in this tiny gazebo, pissing down rain, with a few people dressed as dolphins dancing about and one member of Cat Empire who didn’t stick around to listen to us. *laughs*

CD: Whatâ€™s been your favourite songs to play live? There are some real jumpers.

Gavin: Yeah its hard to say but I really love older stuff like Yonder Ruckus. That was the title track of our first full album. Yeah I still like it.