He dons a suit and tends to a busy schedule, though his job is neither desk nor office bound.

Indeed, his electric-blue suit was self-made, a piece of art in itself, quite possibly born of the intention to remain anonymous in the eye of law enforcers.

And his work? Well, it’s difficult to decide what to mention to first – so I let Brisbane’s own street art hero, Blu Art Xinja, tell me.

CD: Describe yourself as a person an artist in one sentence:

BAX: On a mission of illumination, of myself and the environment.

CD:Â I’ve read that you said, on the topic of creative stuff: “Itâ€™s always been more of a NEED than a hobby.” Can you elaborate a little on what you meant?

BAX: To quote Albert Einstein: “True art is characterized as an irresistible urge in the creative artist.” I’ve always had a burning need to make interesting things and draw designs. Everywhere I go is a canvas to me. If I have a blank piece of paper I’ll draw on it. No pencil? I’ll probably make an origami creature from it. Condensation on a car window? Swirly design. Bunch of sticks? Now a giant nest. 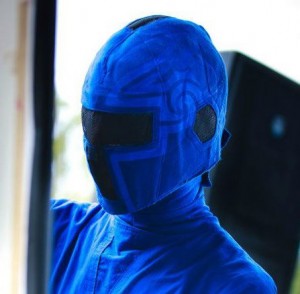 CD:Â Were you always into the kind of art you’re doing now – as in during your childhood/adolescence?

BAX: I’ve done outdoor art (land/environmental art) all my life, but I have only been doing street art specifically for a year or so now. Blue has always been my favorite colour, and those two elements combined naturally to the art I do today. I have always drawn exotic animals and swirly geometric designs as a kid, and indeed still do.

CD:Â Do you think Brisbane provides a nurturing atmosphere for artists of all mediums? What are your thoughts on Brisbane’s art scene, especially in comparison with the bigger Australian cities – Sydney and Melbourne?

BAX: Within any large body of people, there are always like-minded souls… you find them if you search. I have discovered a great bunch of people in the local street art scene myself. I don’t follow the ‘art industry’ in Brisbane as such, so I’m not qualified to comment on that.

It’s true there is far less acceptance of street art in Brisbane as a legitimate art form than in Melbourne or Sydney. This is bad because there is much less support for what you are doing on the whole, but good as I believe you act as a pioneer in that regard… and I just love pushing that limit, and seeing what I can get away with. Ever stretching the acceptability of the medium with visually intriguing things! Personally, I’ve just got to know Brisbane well over the twenty years I’ve been here, so I feel extremely comfortable in what I’m doing. 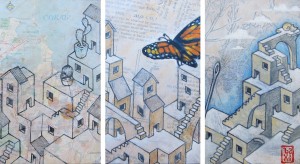 From the series “Tiny Utopias” by Blu Art Xinja

CD:Â If I wanted to go for a stroll right now, where would the best place to see your work?

BAX: Hmm, if you went for stroll in Brisbane to view some Blu Xinja works, I would suggest the Queen Street Mall area. I have seven surviving pieces around there, if you know where to look. In particular Burnett Lane where there are three birds upon a wall that have been there for a while now… has the council accepted this as true local culture, and decided to leave them there? I certainly hope so. They look rather nice there.

CD:Â Is there anywhere outside Australia we can find your work?

BAX: I don’t have much art up outside of Australia… yet. I have one piece in Wellington NZ, where I visited a year ago. My rule now though, is if I travel anywhere, I will install Blu Art.

CD:Â What keeps you inspired and motivated to keep up what you’re doing?

BAX: What keeps me motivated? The joy of forging new avenues in art itself! People see street art, and it is obviously there for the pure love of it. No one was paid to do that, someone just did it because they had an intense urge to decorate their world, and I think that awakens things in people and makes lives better. What better motivation than the enlightenment of humanity!

CD: Where and how do you see yourself in five years time?

BAX: Where do I see myself in five years? Parachuting off a really tall building in the CBD, trailing blue smoke behind me. Landing at a designated point, I will evade the police by disappearing into the underground sewer system. I will emerge nearby in a change of clothes, sip a coffee in a nearby cafe, and chuckle to myself while watching officials run about madly.

Silver Exhibition at the Museum of Brisbane