“What if there was a style called romantic brutalism?” asked director Adam Egypt Mortimer when we spoke to him about his gritty superhero flick Archenemy.

Archenemy stars Joe Manganiello as Max Fist, a washed-up hero with hopes of returning to his home world. With confronting aesthetics and a compelling story, Adam Egypt Mortimer offers a refreshing take on the superhero mythos. We had the pleasure of chatting with him about all things Archenemy and filmmaking. Read on to hear how he developed Archenemy’s unique style and his advice for aspiring filmmakers.

TCI: How did you get your start in the industry?

AEM: Oh, boy. You know, it took a long time, which is always, I think, an important thing for people to keep in mind, that it might take a long time.

I was a musician. I lived in New York and I was a musician in very experimental, sort of like, art-weird-sounds-kind-of-music. I was playing the electric sitar and things like that. But I was interested in, eventually, becoming a filmmaker. I spent a lot of my time filming bands live. Like, you know, the bands I kind of hung out with. And getting a feel for composing images that way, you know? Filmmaking in the smallest possible way.

And then I had an opportunity to make a music video for one of the bands I was involved with. And it was this weird-tiny-very-low-budget-super-experimental thing. But, it went well and somebody from Warner Brothers Records hit me up and said, “I saw that crazy weird experimental video you did and was wondering if you’d want to shoot a video for one of our pop-punk bands”. That was a huge step forward in developing a career as a filmmaker. It would be years after that when I was finally able to make my first movie and that was, like – you kind of just bang your head against the wall for a long time trying to figure out how to get somebody to let you make a movie.

TCI: You said you made a lot of experimental music. You can definitely see that influence in Archenemy. Was that purposeful?

AEM: I think that’s always been apart of who I am. You look at Archenemy, which is my interpretation of a superhero movie and science fiction, but it also has these psychedelic moments and this cosmic vibe, and I think that’s always been who I am and what I’m interested in. Like, why I love genre movies is that I think you can do all these experiments with aesthetics. I want a movie to be so immersive and pull you into the world and I think that it creates opportunities to experiment with colours and sounds and how the music can interact with the movie. I guess that’s something that’s always been apart of what’s been exciting to me. You know, how can I do things that are big and as story forward as possible, but really find places to experiment. 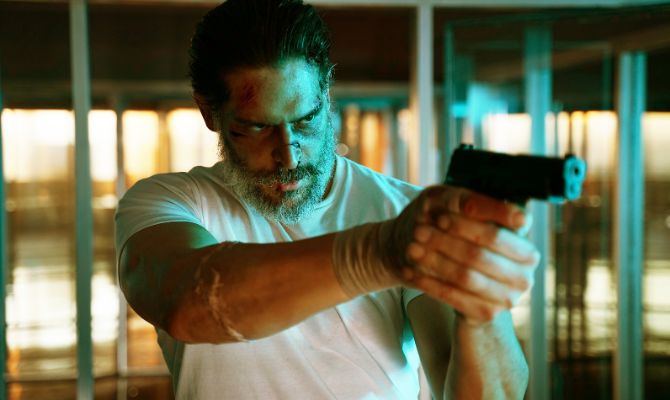 TCI: You’ve also worked in the horror genre a lot. Was it intimidating to transition into the superhero genre?

AEM: It was actually really exciting. It was kind of a relief to step away from horror momentarily because I feel like in horror you need to be so focused on the atmosphere and the tone of it always working towards a sense of dread – here comes the demon, and here comes death, and here comes the darkness. You can play with who the characters are and what the world is but there’s always this kind of sensibility, this horror sensibility, and I feel like with Archenemy that it was an opportunity to be much more expressive. I could open up the world and I could have scenes that were like – here’s a hang-out scene, here’s two people hanging out at a bar talking about weird things, and here’s this strange colourful character, and here’s the digressions. I thought of Archenemy as, like, a crime movie – being about the world and about the city and about all these people that live in it. It was like taking a deep breath and finding ways to be fun that I couldn’t quite do in a horror movie.

TCI: What made you want to create a superhero movie?

AEM: I’ve never stopped loving comic books and reading comic books. And, you know, in comics for decades and decades they’ve understood that superheroes are a mythology or structure instead of a genre. So, you can read one comic about Superman that’s funny, light, romance, and then another that’s dark, cosmic world ending, you know? Sometimes a comic book artist will draw something in a way that feels expressionistic or impressionistic, and sometimes it will be super clear.

And I felt like there was an opportunity for me to bring that freedom of expression to the idea of what a superhero movie could be. Because we’ve seen so many superhero movies we can do them really differently. We can treat them like a different kind of film than the ones we’ve seen already, while still maintaining some of the mythology of it. And that seemed like a really exciting opportunity.

TCI: You wrote and directed Archenemy. What role do you like doing more?

AEM: Directing. Writing is so painful. Anybody who’s a writer knows how much anxiety and sitting, and – oh my God. It’s very difficult and I’ve often said that the reason I’ve written everything that I’ve directed so far is that it’s been hard to find the kinds of scripts and stories that I’d like to direct. But, really, I’m writing things so that I have the project to direct.

And the directing process, which is you’re working with actors, and you’re collaborating with your cinematographer, and you’re out there in the world pointing the camera at a thing and capturing it in the moment. That’s so exciting, I mean, it’s also miserable a lot of the time, but if I had a choice if I could either do one or the other it would 100% be the directing. 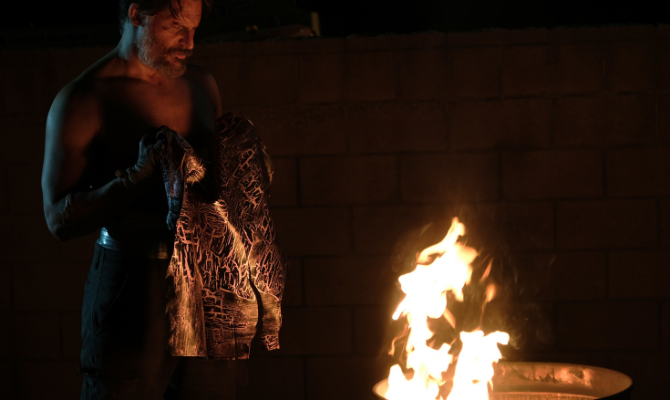 TCI: Did writing a graphic novel have anything to do with wanting to have animated segments in Archenemy?

AEM: That’s an interesting question. There are these segments that are supposed to feel like they’re a memory, or they’re a dream, or a nightmare, or a fantasy, and I didn’t want them to feel too realistic. So, I thought a lot about what those segments would be. The thing about animation was, like the movie Pink Floyd – The Wall, which uses animation in such an expressive and beautiful way.

But, in order to achieve the look and communicate it, I did go back to my comic book roots and look at what my favourite artists did. And the artist that I brought onto the project was somebody who was a comic book artist that I’ve actually been working on a thing with for years, so I knew what his style would be like, and I would know how to communicate with him.

But the challenge with having it be in motion and having it be animated instead of a comic book page – those are, like, totally different worlds. How do we make it feel it’s a movie and not that you’re looking at a piece of art that has no life to it? That was the biggest hurdle to get through.

TCI: All of Archenemy’s aesthetics are attention-grabbing and unexpected. What was the process behind creating these?

AEM: I came up with this phrase, this thing that I was shooting for called “romantic brutalism”. That’s not really a thing, but I was like, what if there was a style called romantic brutalism? There would be aspects that would feel wistful or beautiful – there’s these neon lights, there’s this very specific colour palette that reoccurs. But, at the same time, it’s gritty and it’s miserable, and the main character is a drug addict who lives under a bridge, and it’s really violent. So, thinking about how to match that stuff together and how to use the style to reflect his feelings, to reflect this tragedy of this man who’s wondering what’s true – you know, he had these incredible adventures where he would fly through black holes and punch bad guys and was like a God, but now he’s this alcoholic living under a bridge. What style should that be? How can that feel romantic and moving? How can it feel dirty and gross, but also cool and immersive?

Part of the process of what I do on a movie is to create a sort of style guide. Which is a lengthy document – I think in this case it was about a 20-page document– full of reference photographs and stills of other movies, a deep description of what the themes of the movie are and how to communicate that in colours, and textures, and framing. By the time we’re ready to start working on the movie, I can give that to everybody I’m working with.

I think the thing that’s so crucial and where style comes from is the costume designer not only bringing out the character but connecting to the movie as a whole. And the same with what the furniture looks like, and with what the light looks like. So, trying to get everybody into the same space, into the same cool zone, is the main thing that I feel like my job is with all of them. There was a lot of thinking, and playing, and dreaming, and then bringing things together. 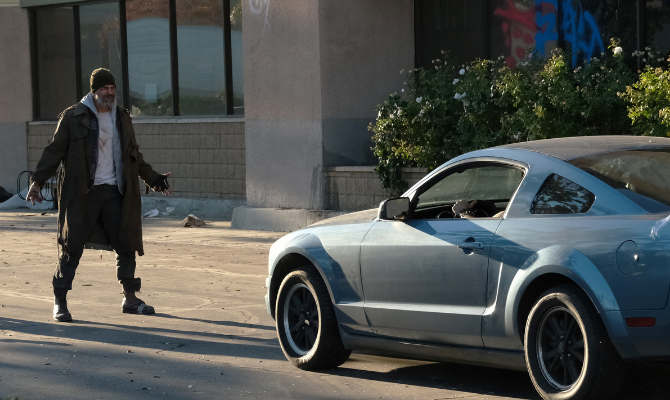 TCI: How much performance did the Actors’ performance have on the characters? Did you find that evolved from the original script?

AEM: Oh, very much. With Joe Manganiello, who plays Max, his interest in really breaking the guy down physically really deepened the character and brought so much texture to it. He was out there, thinking: okay, so what was it like to be a man who is homeless and addicted to drugs? I wake in the morning and what does that feel like? And he brought a lot of physicality to it – he’s limping, and he doesn’t like the sunlight, he’s hungry. He really played into that physicality, which I hadn’t fully worked out.

Everybody in this movie comes into these parts that had to be so colourful and exciting. You look at Zolee Griggs playing Indigo and she has this incredible superstar quality. You can imagine her as this girl who could be a superstar in a different context, but this is the context where she has to be a drug dealer taking care of her brother. There’s such a beautiful combination of vulnerability and star power.

In a movie like this, where you get this kind of ensemble, it’s just very special to see them all get excited about what they’re wearing and what they get to do. Paul Scheer has snakeskin boots and says crazy things about them. It’s so much fun to see them all interact with the world.

TCI: What advice would you give to aspiring filmmakers who want to find success in a competitive industry?

AEM: I think you have to constantly be kind to yourself and, people say this and it’s so hard to actually pull off, but you can’t compare yourself to others – their age, their level of success. Eventually, you’ll get to make your movie, and you need to approach with love and gratitude that you’re finally getting to do it, instead of carrying this kind of anxiety and remorse that you’re not getting to do it when you were hoping you to. This coming from experience, this is coming from somebody who has struggled so much with those emotions and feelings of desperation.

A Sinful Bite: An Interview with Brief’s Fez Faanana