The award provides a $3,000 cash payment and â€“ perhaps more importantly â€“ a publication deal with University of Queensland Press.

It comes just months after the poet began a year-long position as Lord Mayor’s inaugural Reader-in-Residence, breathing life and death into the Brisbane Square Library.

It was, however, Stavanger’s gothic cabaret alter-ego who physically received the award . Ghostboy is a kind of punk Edgar Allen Poe smeared with black lipstick and drinking bad absinthe, wry eccentricities perched somewhere between joke and threat.

The sum effect is a pretty unusual candidate for one of the state’s most prestigious poetry awards, particularly one without a stage element.

I got in contact with David ‘Ghostboy’ Stavanger to find out more. 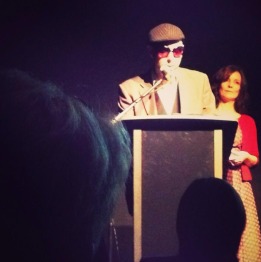 CD: What does winning the Thomas Shapcott Poetry Prize mean?

David: For someone like me, who has come more from the experimental and performance base, to win an award that’s about page-based writing? Not many performance poets get to win this stuff.

It’s a weird validation that I can write, although I knew that. It opens up opportunities, and not having to justify yourself as a performance poet â€“ which can be this strange divide sometimes.

CD: What kind of divide?

David: There is a hesitancy in some printed poetry culture around performance poetry, but likewise there’s a lot of antagonism towards page poetry in some spoken word artists.

CD: What is a reader-in-residence?

David: A good friend of mine called Ryan Van Winkle is an American living in Scotland, and he created this idea to try to engage readers with poetry.

I tweaked it a bit because I’m also quite into performance. Every Thursday I’m at the Brisbane Square Library doing live writing, live reading over the PA system and down the escalators. We’ll soon have an online project where you can edit my work or respond to it.

There’s a bunch of events.

CD: What’s made this kind of program possible?

David: Libraries and the Brisbane City Council are putting money into writing in a way that’s actually at odds with the political climate around arts.

I get sick of this idea that Brisbane isn’t innovative in the arts. It’s an old idea, and we have such a thriving arts culture right now.

CD: Why is Brisbane’s spoken word scene going so well at the moment?

David: Most important of all, to be honest, has been the institutions and the festivals backing spoken word. Community players are crucial but what’s different now is the spotlight that’s happening.

You have to give massive credit to the State Library of Queensland for backing this in a way no other state has.

In Vogue, by Kirstie Clements