Swan walked calmly up to me and kissed me on the cheek.

When the lead vocalist of a female fronted symphonic metal band kisses you and then gives you the most excitable smile, you know youâ€™re in to meet some interesting people.

Swan Davies introduced me to Raouf Araji and we sat down on the red couches in the centre of the Judith Wright centre in Fortitude Valley.

A contrast to Swanâ€™s light pink hair and fair skin, Raoufâ€™s is all dark chocolate eyes and strong features. Lead guitarist to the progressive metal band, he could be a young Serj Tankian any day of the week.

Dark Symphonica is described by the band as symphonic metal, taking their influences from thrash metal, death metal and melodic sounds. If you were to say Nightwish or Opeth, youâ€™d be getting warmer.

A brain child since 2009, one by one, each member fell into place until finally the band was fully formed, with Swan and Nick Wilson on keyboards being the last to join. Other members of Dark Symphonica include Fiona Newman on bass and Trystan Jongejan on drums.

Dark Symphonica is a true labour of love with the upcoming album, Desolate Sanctuary, a pinnacle of the 40+ hours a week each band member dedicates to their art. When asked about the new album, both Raouf and Swan smiled hard.

â€œThere are eight songs but all up it goes for about 70 minutes. Our music is colourful and sends you on a journey. It starts off really intense and chaotic and then mellows down towards the end before it changes again. Itâ€™s progressive, we have so many sounds,â€ Raouf said. 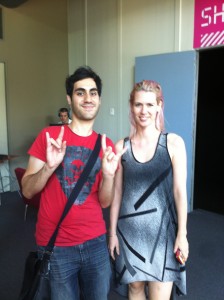 â€œThe name Desolate Sanctuary is hard to explain. You have a home thatâ€™s on its own, itâ€™s desolate, and thatâ€™s the only place you feel comfortable. It is your own sanctuary. Itâ€™s more of a feeling for me really.â€

Swan nodded enthusiastically at her band mate. It was obvious the blood, sweat and tears that went in to the making of this album. The pride and respect that was heavy in their voices when they spoke about their music, current and previous band members and recording manager Adam Merker, were testament enough.

â€œWeâ€™re telling a story with each instrument,â€ Swan added.

Having recently supported Voyager at the Crowbar in Brisbane, the band is set to support Dark Cell on October 11th at the Transcontinental Bar on George St in Brisbane.

If there is something to be said for a band with a stage presence that eclipses metal, made up of people with truly excellent natures, then this band is worth checking out.

Take a peek at what theyâ€™re about on Facebook and stay tuned for the album set to be released next year with a hopeful single to grace the stage towards the end of 2013.