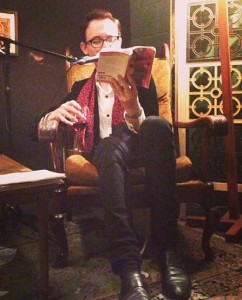 Heâ€™s spent the last year or so delivering public readings of these sordid little paperbacks throughout Brisbane.

At first blush itâ€™s a bizarre conceit â€“ something perhaps a little too clever, a performance piece best left for the literature majors.

But those fears quickly evaporate in the first moments of Watsonâ€™s witty, polished routine.

Something about the foppish suit and silken baritone (lingering delicately over each naughty word like school children in an illustrated dictionary) is immediately and lastingly hilarious.

It doesnâ€™t hurt that the books themselves are mesmerizing train wrecks of metaphor and tired clichÃ©s.

After June’s Creative Drinks review, I caught up with Nicholas K. Watson to probe even deeper.

CD: How did you discover your gift for reading romance novels in public?

Nicholas:Â My brother and I strolled into Room 60 where they decorate their walls with Mills & Boon books.

As Iâ€™ve known my brother for 20 years, we really have nothing else to say to each other.

So I swiped one of the books, opened to it a well-thumbed page, and read him the cutesiest passage on nipple licking available.

Then I borrowed a few and I was reading them in silence in my room. I thought, this is all well and good, but wouldnâ€™t it be better on stage, in my voice, in front of an audience?

I checked, and the answer is yes.

CD: Whatâ€™s the key to a great romance novel?

Nicholas:Â A lot of them are just sentimentality with smatterings of filth, and theyâ€™re the ones I really like.

Iâ€™ve located a few of the other type, the black sheep of the family, and theyâ€™re vile smut and buckets of filth.

You get to page seven and you feel like youâ€™re in the tertiary throes of syphilis.

Theyâ€™ve got to have a gentle quality to them but with really surprising sex scenes.

CD: Something your mother would read?

Nicholas:Â Exactly â€“ and my mother even comes to the events every now and then. 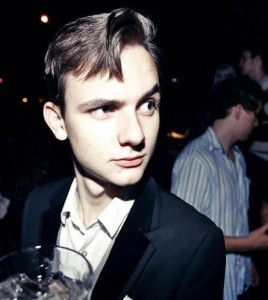 CD: Is Brisbane a romantic city?

Nicholas:Â Itâ€™s one of the most romantic.

I think of Brisbane as being the Paris of Queensland.

Thereâ€™s nothing more exciting or romantic than a river.

What motivates you to take the stage?

Nicholas:Â Itâ€™s a duty thatâ€™s got to be done.

I am purveying not only naughty nonsense in a deep, husky voice (and the bad lady voice I put on for the female character) but Iâ€™m also giving the locals a relief.

Itâ€™s probably their most important coital event since their conception.

Itâ€™s the sexiest thing to hit Brisbane since I moved here from Switzerland.

CD: Whatâ€™s your advice for upcoming readers of romance novels?