Tristan Ham has sung and punned his way to victory in the latest heat of Iron Improviser IX at the Brisbane Arts Theatre.

ImproMafia began holding the competition in 2005, with local comedians battling it out for the (somewhat-but-not-really) coveted title of Iron Improviser. 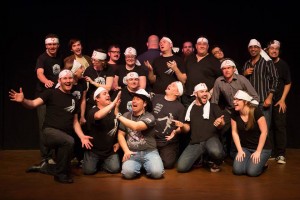 The heats are also a chance for the company’s newest performers to graduate from pub shows, making them an informal rehearsal for further work at the Brisbane Arts Theatre.

Contestants are given classic scenes from the world of improvised theatre over several rounds (Death in a Minute, Alphabet), which are then rated by a venerable panel of judges.

Scores range from Ichi (one) to Godzilla (four) â€“ did I mention the kung fu theme?

In the end, Tristan Ham channelled his inner Kurosawa to dishonour all competitors, defeating 15 improvisers to claim the heat. He’ll return for the final on December 1st at the Brisbane Arts Theatre.

To tide you over until then, here are five golden moments from Iron Improviser IX â€“ Drunken Monkey Heat.

A song about a moustache:

â€œWhen I hit my teenage years,
I had hair growing out my ears.
It was awful. It was a disgrace.
So I combed it ’round to cover my face.
I had a comb-over moustache!â€

Death in a Minute in Los Angeles:

â€œCommander, the minutiae of tying balloons is telling me so much about my relationships.â€

â€œTristan’s character is a talking dog; Dan’s character has a headband keeping his brain from falling out; Al’s character can’t speak â€“ not for any reason, but just because he hasn’t bothered for 10 years; and Wade’s character is the boss of the world. Do you need any more offers?â€ 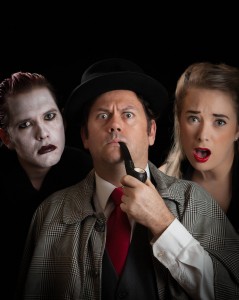 The Art of Sound at Caboolture