Jaguar Jonze talks You Got Left Behind

Jaguar Jonze’s creative story is one that any music lover should be following. From her culturally diverse background, to her move from bedrooms and basements to the Foundry, and her visual art, she’s everything that we love about Brisbane-based artists and more.

The Foundry show follows the release of ‘You Got Left Behind’, the mesmerising mishmash of sounds that is Jaguar Jonze’s first release.

“My process isn’t actually all that flash. It’s all in the economical setups of basements and bedrooms.” She laughs.

“Everything was written in my bedroom and everything was recorded between my study room and my friend’s basement in Paddington, Brisbane. I did the whole flashy studio thing prior but it just didn’t work for me. I love the rawness, imperfections and the intimacy.”

If you’re wondering what you can expect from the Foundry gig, Jaguar Jonze says, “Well, the audience will be my sweet guinea pigs as I test out a body of new work on them. I’m hoping to put on a really connected show and make my hometown proud of my growth as a person and development as an artist.”

She also says she’s feeling “pretty excited” ahead of the show.

“It’s a good feeling to finally be able to bring this project outside of my bedroom and send it out into the wild haha. We’ve been rehearsing every week for the last 2 months to get our bodies warmed up.”

Jaguar Jonze isn’t only marking her incredible debut with a show in Brisbane, she’s also joining the lineup for Music Matters Festival and the International Indie Music Festival. She explains how it felt to tick off international performances so soon after dropping her debut.

“Like a train had hit my head. But like a very happy train with unicorns and fairies on board. It feels like such a blessing to be able to gig abroad in Singapore and Indonesia as one of our first few shows.”

Even if you’re not familiar with her music, the name Jaguar Jonze‘s might ring a bell. That’s because the Brisbane local also works as a visual artist, under the name Spectator Jonze.

“Spectator Jonze is my people project where I interview each subject on their mental health and draw a portrait of them. I didn’t know it at that time but it was a healing process for me and all of these beautiful subjects have helped me learn to open up slowly which has allowed me to push my own boundaries in my songwriting and performance.” 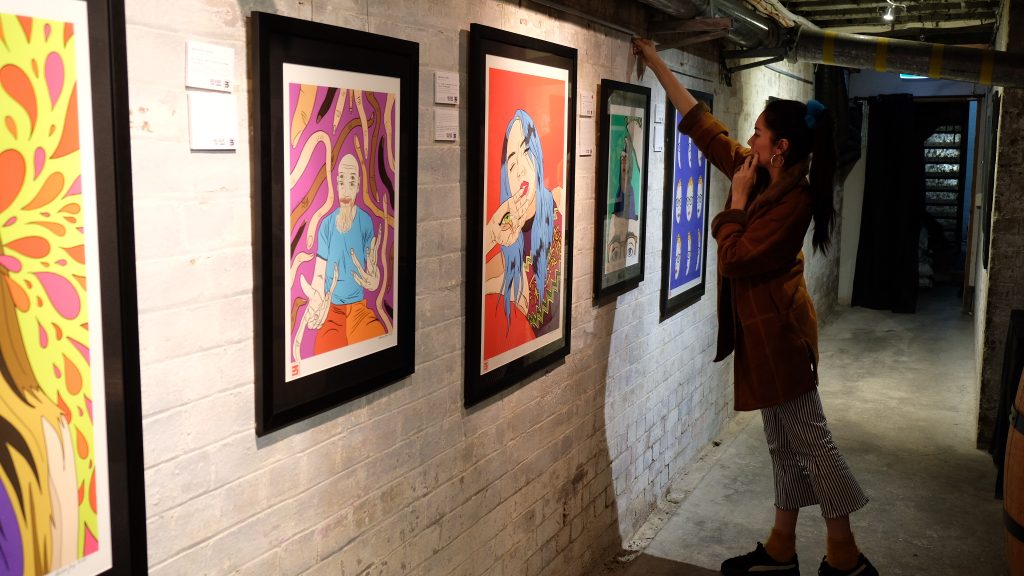 Listening to ‘You Got Left Behind’, you can certainly hear traces of inspirations from a variety of genres, from its country guitar to its dreamy vocal layering. Jaguar Jonze explains that this is “most definitely” the result of her culturally diverse upbringing.

“I was born in Japan and grew up listening to a lot of gorgeous, intricate anime soundtracks, grew up with my Taiwanese mother who brought me up on classical music and pop divas and then there’s my Australian dad who likes to go cowboy country. Throw that all into a pot with my own youth and pop culture thrown into the mix and you’ve got yourself Jaguar Jonze. Bon appetit!”

“…to expand on the pop divas; my guilty pleasure but I have no guilt tied into it whatsoever is Celine Dion. Then there’s Nick Cave, Jeff Buckley, Chris Isaak, Bryan Adams, The National and City and Colour. “

We’re sure that that Jaguar Jonze’s gig will leave you wanting more, so you’ll be glad to hear that’s not the last you’ll hear from her this year.

“In November I’ve got Australian Music Week down in Sydney and then a BATTS support in Brisbane’s Bloodhound. There’s a few other things bubbling away too…”

THE DETAILS:
What: Factory at the Foundry With Jaguar Jonze + Salmon & The Peaches + RINAE
Where: The Foundry, 228 Wickham Street, Fortitude Valley QLD 4006
When: September 14th @ 8pm
Website: link to website
More Info: 18+ event