The unthinkable happens in the small Australian bush town of Corrigan when a girl dies, a young man is blamed without a second thought, and secrets beg to be revealed.

Queensland Theatre’s restaging of Melbourne Theatre Company’s production Jasper Jones is a powerful reminder of Australia’s history of discrimination and subjugation. Told through the eyes of 14-year-old Charlie Bucktin, Nicholas Denton, Jasper Jones is set in the summer of 1965. Charlie is a white kid in a white town except for 16-year-old Jasper Jones, Shaka Cook, whose father, a ‘white fella’, dared to marry an Indigenous woman. Jasper’s reputation in Corrigan is deplorable and unjustified, but that doesn’t stop the town assuming the worst when young Laura Wishart, Melanie Zanetti, goes missing.

Through the eyes of Charlie, we witness the effect of fear and uncertainty on the residents of Corrigan, from the final collapse of his parent’s marriage to the xenophobic violence towards an innocent Vietnamese immigrant, the father of Charlie’s best friend, Jeffrey Lu, Hoa Xuande. And Charlie is caught in the middle of it when Jasper Jones knocks on his window late at night and leads him to Laura’s grave. 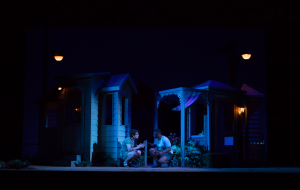 By retelling the Corrigan summer of 1965 through the eyes of our young, white, male protagonist, the production highlights the contrasting privilege between Charlie and Jasper. Privilege is often unbeknownst to the privileged, as is the case with Charlie Bucktin. It isn’t until Jasper explains the power Charlie’s presence has on the legitimacy of Jasper’s claims that we see an inkling of possible understanding dawn. This juxtaposition of Charlie’s youthful and privileged innocence against Jasper’s older and lived experiences continues throughout the production, and Jasper’s presence challenges Charlie to understand his position and role in the town of Corrigan, in turn challenging audiences to understand their position today.

What I find fascinating in this approach, is at the end of the production, Corrigan returns to its level of indifference, and with that, so does Charlie. While this may challenge some viewers in understanding what change was affected, I view this as alluding to a continued ignorance of privilege that translates from 1965 to today. And while, at times, the performance lacked in energy, I sensed a shared commitment to telling this confronting story as honestly as it deserves. 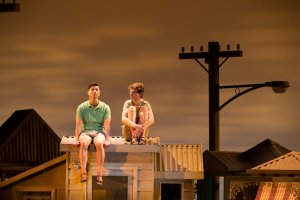 Traversing through the blissful serenity in the daydreams of a teenage boy, overthrown by scenes of violence and hatred, and haunted by images of a dead girl, Jasper Jones is a production that challenges the viewer but tells a story important to be told. The set is phenomenal and brought to life by character interactions and the physical movement of the rotating stage, which only aids the viewer in losing themselves in the histories of Charlie Bucktin, Jasper Jones, and the small town of Corrigan.